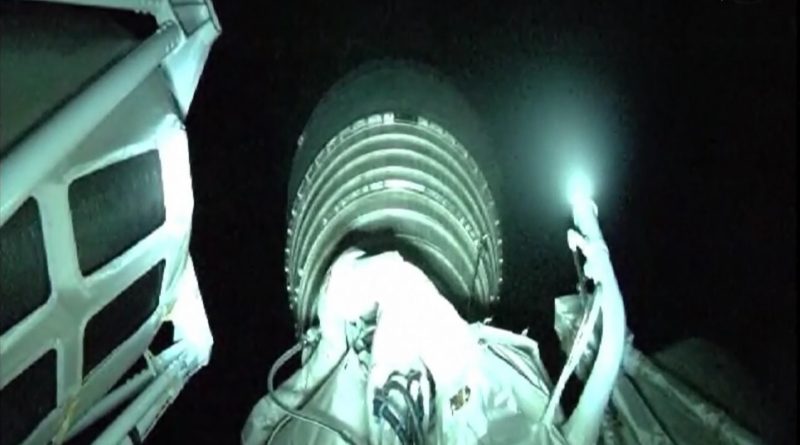 Although widely hailed as a complete success, Tuesday night’s Atlas V launch with the Cygnus OA-6 cargo craft headed to the International Space Station left some questions open on a possible performance hit suffered by the workhorse launch vehicle.

Thundering off, Atlas V swung to the north east along a coast-hugging trajectory and was widely visible from the U.S. East Coast before the ascending vehicle headed out over the Atlantic Ocean – still firing its RD-180 main engine that generated up to 422 metric-ton-force of thrust when the vehicle was flying through the tenuous layers of the upper atmosphere.

The Common Core Booster handed off to the Centaur upper stage after passing the T+4-minute mark with payload fairing separation occurring a few seconds into the upper stage burn. The most obvious deviation from the published mission timeline was the duration of Centaur’s RL-10C engine burn  – the public ascent timeline showed a planned burn duration of 13 minutes and 38 seconds while real-time launch commentary reported a planned burn time of 13 minutes and 45 seconds which would place the expected shutdown at T+18:16.5.

Centaur engine shutdown occurred 19 minutes and 18 seconds into the flight, according to the real-time data feed shown during the launch broadcast, firing over one minute longer than expected.


Centaur achieved a good orbit, dropping Cygnus off in an insertion orbit of 232 by 237 Kilometers at an inclination of 51.65° according to tracking data published by the Joint Space Operations Center – confirming that Centaur reached a satisfactory orbit with respect to the circular target of 230 Kilometers, though the case of a one-minute over-run in burn time seems curious.

When asked about the possible discrepancy in burn time, Thorp stated: “The pre-launch predictions of exactly when the events are going to occur are based on a preliminary trajectory, typically developed a few weeks before the launch, so it is not unusual for things to vary a little bit based on the actual conditions at launch.”

While the launch timeline may have been published based on preliminary data, it can be assumed that ULA’s Telemetry Engineer has accesses to the trajectory solution based on the latest computations, therefore clearly suggesting that the burn ran long.

Another fact supporting this is the Cygnus OA-4 mission on December 6, 2015 using a launch profile almost identical to Tuesday night’s mission. For OA-4, the shutdown time for the Centaur upper stage was indicated at T+18:15 in the Live TLM Data Display – lining up with the published mission timeline showing an expected MECO at T+18:16.7.

Looking at the Live TLM Display for the OA-6 mission, Centaur was far from achieving orbit when the T+18:16 reference time arrived: the instantaneous perigee read -1,220 Kilometers, instantaneous apogee was 240 Kilometers and the inclination was 51.27°.

An argument that could be made is that the published timeline may be for an in-plane launch at the center of the half-hour launch window, not accounting for the additional delta-v needed for the dogleg performed by Centaur to steer into the orbital plane of ISS when launching early or late in the window. However, the OA-4 mission also launched at the top of the window and mission event times lined up with the published timeline.

Assuming Centaur had to use surplus performance to successfully achieve orbital insertion Tuesday night, the question arises at what point Atlas V suffered a performance hit.

Consulting videos of numerous Atlas V launches of the past four years, it can be determined that the Live TLM Display at Booster Engine Cutoff (BECO) typically matches up with the pre-launch prediction to within +/-1 second. (The missions looked at were Morelos 3, MMS, MUOS 3, DMSP F19, TDRS-L, MAVEN, AEHF 3, GPS IIF-4, TDRS-K, RBSP, AEHF 2).

Tuesday night’s BECO time according to the Live TLM Display was T+4:10.1 – taking the acceleration drop from 100ft/sec² to zero as indicator for BECO. This would place the 1st stage burn time 5.4 seconds shorter than specified in the published launch timeline and is out-of-family when looking at the 11 missions mentioned above which all showed closer matches.

These data points would suggest that Atlas V’s first stage shut down too early which could be an explanation for Centaur extending its burn and making up for delta-v lost during first stage flight. An early shutdown of the Common Core Booster could be caused by a number of issues, the prime suspect first to be checked off the list would be a premature depletion of either LOX or Rocket Propellant 1 and/or issues related to the RD-180 engine.

A back-of-the-envelope-calculation based on a 5.4-second shortfall in burn time of the CCB yields an additional delta-v required from the Centaur upper stage on the order of 165 meters per second. Taking into account the significant additional gravity loss due to Centaur’s low acceleration (especially with a heavy payload like Cygnus), a burn extension of one minute is entirely plausible.

Performance-wise, Atlas V 401 is capable of delivering 8,305 Kilograms to a 230-Kilometer orbit, according to NASA’s Launch Services Program ELV Performance Tool. Cygnus weighs around 7,500 Kilograms, explaining why Centaur could stretch its burn and use up spare performance to make up for what was lost when the first stage cut off too early.

After dropping Cygnus off in orbit, the Centaur Upper Stage was to perform an 11-second Deorbit Burn at around T+48 minutes. The stage has not been tracked in orbit, confirming that it managed to deorbit itself even after consuming more propellant than expected during the primary mission.

Sent off on a three-day trek to ISS in a good orbit, the S.S. Rick Husband successfully executed its first steps in orbit early in the morning on Wednesday (UTC). A first set of orbit adjustment maneuvers was successfully carried out and tracking data currently shows the OA-6 spacecraft in a 240 by 251-Kilometer orbit. Rendezvous and capture remains planned for Saturday.