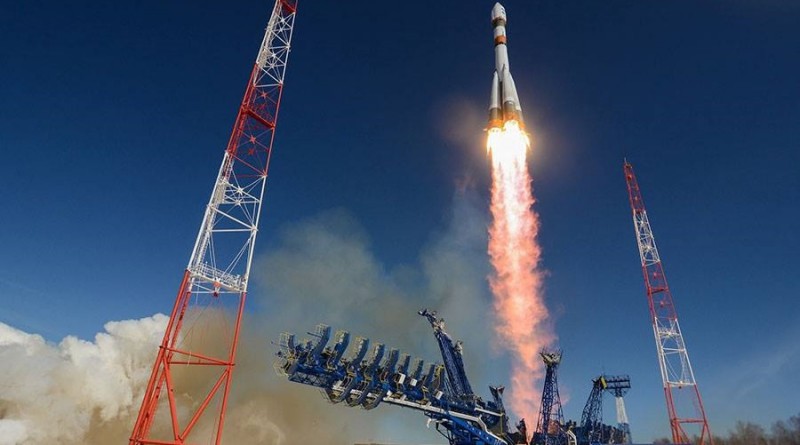 Russia’s Soyuz rocket lifted off from the country’s primary military launch site at Plesetsk on Thursday, conducing a semi-secret mission only announced on short notice through air route restrictions. The Russian workhorse launcher, making its third launch of the month, was carrying the second Bars-M mapping satellite.

Liftoff from the military launch zone in Russia’s north west occurred at 9:42 UTC and Soyuz was set for a flight to a high-inclination orbit from where the sharp-eyed cartography satellite can map virtually the entire land surface of the planet. To deliver Bars-M No.2 to an elliptical orbit peaking at around 550 Kilometers in altitude, Soyuz flew without an upper stage and was to release the satellite nine minutes after liftoff.

The first Bars-M satellite sailed into orbit on February 27, 2015 after a long journey to the launch pad in a program once aiming for its first launch in 2012 but plagued by technical challenges leading to lengthy delays. The Bars satellites are filling a decade-long gap in cartography missions after the retirement of their predecessor, Kometa. Initially, the second Bars-M satellite was up for launch in August 2015 to follow the first spacecraft into orbit within half a year, but the mission was delayed after the failure of the Soyuz 2-1A rocket in the launch of the Progress M-27M cargo craft last June.


The Bars-M satellites are replacing the Kometa imaging satellites, the last of which flew in 2005. Kometa hosted a combined high-resolution and stereo-imaging payload that exposed physical film which had to be returned to the ground via large return capsules – a concept that became outdated over the course of the 1990s when electro-optical satellites started to be introduced that had the capability of downlinking digital imagery to ground stations.

Development of Bars was started in the late 1990s, based on the often-used Yantar satellite bus. However, the project suffered technical problems and a severe lack of funding ultimately led to the cancelation of Bars at some point in the early 2000s. The program was revived in 2007 under the Bars-M designation when spacecraft and launch vehicle manufacturer TsSKB Progress was appointed to develop a new satellite bus to be fitted with an optical payload provided by LOMO. With a mass of around four metric tons, the satellite is lighter than its Yantar-based companions in the Russian Earth imaging satellite fleet, Persona and Resurs.

The Bars-M satellites carry a pair of imaging payloads collectively referred to as Karat – a high-resolution imager reaching a ground resolution of one meter and a lower-resolution system covering a wide footprint and delivering stereo-imagery for topographic mapping. A Dual Laser Altimeter provides additional topographical data to support mapping.

Data from the Bars-M satellites finds application in the generation of accurate maps for military operations but is also available for land and resource management.

No prior announcement was made for Thursday’s Soyuz mission aside from air route closures issued earlier in the week, no reports of any processing milestones were published as has become the norm for military missions launching out of Plesetsk. The closed air routes matched up with those identified in the first Bars-M launch, providing confirmation of the payload heading into orbit aboard the Soyuz rocket as no official information on the satellite’s identity was available ahead of Thursday’s mission.

To launch the Bars-M No.2 satellite, Soyuz flew in its 2-1A configuration, the less powerful version of the improved Soyuz launch vehicles, operated alongside the 2-1B version which can lift a greater mass into orbit. Soyuz 2-1A employs the standard Soyuz design flown for over five decades with four liquid-fueled boosters clustered around a large core stage and a modified Block I third stage sitting atop. The vehicle uses a digital guidance system for better controllability and precision in flight and the modified Block I stage features an improved structural design.

Countdown operations were initiated in the early hours on Thursday, starting with the activation of the launch vehicle for checkouts and tanking preparations at the Site 43/4 launch pad. Propellant loading operations were initiated inside four hours to launch to fill the tanks of the 46-meter tall rocket with 274,140 Kilograms of Liquid Oxygen and rocket-grade Kerosene with the core and boosters also receiving Nitrogen to be used as pressurant gas. When tanking was complete and LOX entered replenish, final close outs of the launch vehicle and the ground facility started, as did a final round of systems checks on the rocket followed by the upload of flight parameters to the vehicle’s computers.

The two halves of the Service Structure were lowered at around L-45 minutes, revealing the 308-metric-ton launch vehicle atop its pad, going through the final preparatory steps to enter the Automated Countdown Sequence. Heading into the business end of the countdown at T-6 minutes, Soyuz started a carefully designed sequence to pressurize its tanks for flight, purge its engines for a clean ignition and switch to onboard power. One minute ahead of T-0, Soyuz assumed control of the countdown – leading to the disconnection of the third and core stage umbilicals and the retraction of the umbilical towers.

The Launch Command was issued at T-20 seconds and the RD-107A engines on the boosters and the RD-108A on the core started spinning up their hydrogen-peroxide-driven turbopumps. Soaring to life, the engines reached a collective liftoff thrust of 422 metric-ton-force.

Soyuz lifted off at 9:42 UTC, thundering off on a nine-minute ascent mission starting with a vertical climb of a little over ten seconds before conducting a roll and pitch maneuver to attain a north-westerly ascent trajectory towards a 98-degree orbit. Burning 1,600 Kilograms of propellants per second, Soyuz flew over the Arkhangelsk region, crossing over the White Sea and heading over Murmansk and the Barents Sea in the later stages of the flight.

Shutdown of the four liquid-fueled boosters was to occur one minute and 58 seconds into the flight after each burned 39,600 Kilograms of propellants to help accelerate the stack to over 1.5 Kilometers per second. Jettisoned by pyrotechnics and pushed outward by pistons, the boosters were to tumble back to Earth for impact in the White Sea, around 350 Kilometers from the launch site.

With the 19.6-meter long boosters making their way back to Earth, Soyuz was to head on toward space under the power of its four-chamber RD-108A engine, reaching a thrust of 102,000 Kilogram-force when flying in the upper atmosphere. The 27.8-meter Core Stage was to conclude its burn four minutes and 45 seconds after liftoff with ignition of the RD-0110-powered third stage two seconds thereafter and the firing of separation pyros a moment later in the typical hot-staging sequence employed by the venerable Soyuz launcher.

Delivering 30,400 Kilogram-force of thrust, the third stage was set for a burn of four minutes to finish the task of lifting the Bars-M No.2 satellite into orbit.

Separation of the Bars-M No.2 satellite was expected just before hitting the T+9-minute mark into an orbit not disclosed to the public. The first Bars-M satellite achieved an initial orbit of 328 by 540 Kilometers at an inclination of 97.6 degrees and the No.2 satellite was targeting a very similar orbit.

Launch success was confirmed by the Russian Ministry of Defence a short time after the satellite separated from the booster and orbital tracking data confirmed the spacecraft entered the expected orbit, removing any remaining doubts on the payload’s identity:

The operational orbit of the Bars-M satellites is a Sun-Synchronous Orbit of 570 Kilometers at a 97.7-degree inclination. In the days and weeks after launch, the spacecraft will use its SVIT propulsion system to enter its nearly circular working orbit followed by fine-tuning of the two-satellite constellation to set up the best possible re-visit cycle between the two Bars-M satellites.

Up to six Bars-M satellites are currently planned to be launched, the next aiming for liftoff in 2018.

Soyuz will make its next launch on March 31st, lifting the Progress MS-02 cargo craft into orbit for a resupply flight to the Space Station, bringing the number of Soyuz launches this month alone to four.