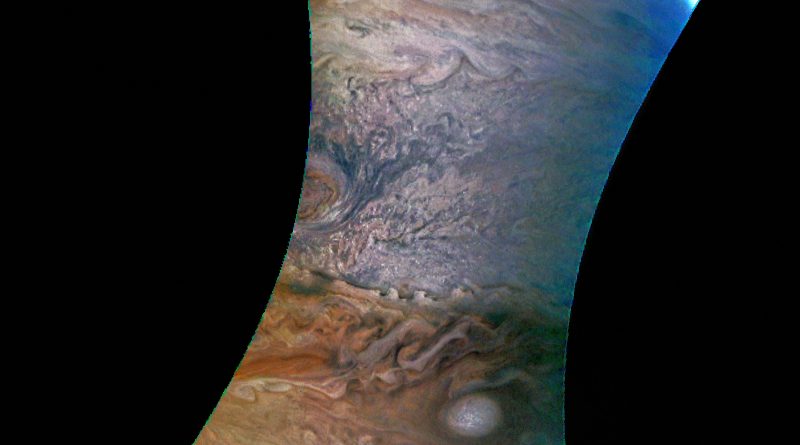 NASA’s Juno Spacecraft on Monday completed its fifth close orbital flyby of Jupiter, the fourth fully successful science pass of the mission collecting data on Jupiter’s enigmatic atmosphere and probing the gas giant’s interior. Monday’s flyby was the first close pass of the spinning spacecraft after NASA managers decided to keep the probe flying in its present orbit taking 53 days for one lap around Jupiter.

Juno has been in orbit around Jupiter since July 4, 2016 when the craft fired its engine to slow down for capture in a highly elongated orbit around the planet. Original plans called for Juno spiraling down into a two-week orbit in October, but the maneuver was called off when a pair of check valves in the craft’s propulsion system were sluggish to open. The decision to forego the maneuver altogether was made in February and Juno is looking at a changed mission design, taking close-up measurements only every 53 days.

NASA reported Juno performed as planned during Monday’s flyby, ending its fourth science orbit as it zipped over Jupiter’s dense cloud tops at 8:52 UTC at a close approach distance of 4,400 Kilometers from the cloud tops, flying at a relative speed of 57.8 Kilometers per second along a north-to-south heading.

“Every time we get near Jupiter’s cloud tops, we learn new insights that help us understand this amazing giant planet,” said Juno Principal Investigator Scott Bolton. All of Juno’s science instruments and the JunoCam imager were operating as planned on Monday. Images taken by JunoCam were sent back to Earth over the course of the week and released for processing by citizen scientists around the world.

Monday’s flyby marked the mission’s sixth close encounter with Jupiter: the first time Juno passed the giant it fired its main engine to be captured in orbit, the second close brush past the planet in August 2016 served as a science checkout, the October flyby did not produce any science data because a software error sent Juno into safe mode and Perijove passes in December, February and March delivered science data.

The objectives of the Juno mission have not changed after the decision to keep the spacecraft in the elongated orbit. The current orbital setup does not differ from the science orbit in terms of the geometry of the close passes, however, close encounters are few and far in between compared to the original plan of completing 36 science orbits through February 2018. Per the current plan, Juno will be able to complete eleven science orbits before the original end-of-mission date. These eleven encounters should provide sufficient data to complete Juno’s minimum science requirements, NASA says.

The mission’s constraining factor is the radiation dose the spinning spacecraft receives while passing through Jupiter’s intense radiation belts. Flying in the highly elliptical orbit allows Juno to spend more time in a benign radiation environment, thus slowing down the build-up of cumulative dose. NASA hopes this will allow Juno to operate beyond the February 2018 primary mission end and the team expects to apply for funding for an extended mission to keep Juno operating for another three years.

A side effect of the changed orbital design is Juno can collect bonus science measurements. Venturing out to a distance of around eight million Kilometers, Juno passes through Jupiter’s magnetotail and can use its particle and waves sensors to capture data on the structure of the planet’s complex magnetic field at greater distances. This could help scientists understand how planetary fields interact with the solar wind and what drives Jupiter’s powerful auroras, differentiating between those caused by the solar wind and auroral displays driven by convective processes.

So far, Juno has shown that Jupiter’s magnetic field is more complicated than originally believed based on data gathered from previous missions. Data analyzed to date also shows Jupiter’s colorful belts and zones extend into the deep layers of the atmosphere characterized by crushing pressures and extreme temperatures. Juno data also indicates that Jupiter moon Io contributes to the planet’s powerful auroras that may be caused by material lifted from Io which then interacts with Jupiter’s magnetic field.

Juno’s next close flyby of Jupiter will occur on May 19, a maneuver executed on the craft’s outbound leg will set the time of closest approach to target a precise longitude on Jupiter over which the spacecraft will pass.