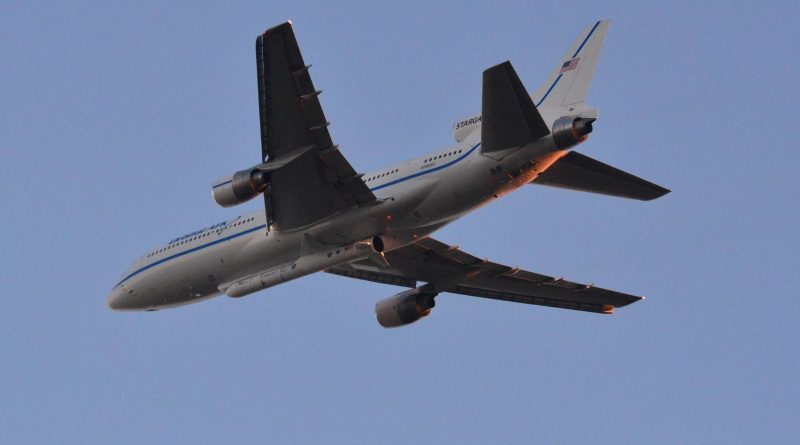 Dropped from a modified Jumbo Jet, a Pegasus XL rocket will power into orbit with eight miniature satellites on Monday, setting out to measure winds over the world’s oceans and peer into the inside of Hurricanes to reveal processes hidden from view by intense bands of rain.

Headed into a 500-Kilometer orbit around Earth, the eight pyramidal satellites are part of a $157 million NASA mission known as the Cyclone Global Navigation Satellite System (CYGNSS).

Each of the 28-Kilogram satellites hosts a high-fidelity antenna system to pick up the faint reflections of signals from the Global Positioning System bouncing off the ocean and holding information on wind speed and direction just above the ocean surface. Conventional sensors, such as ground-based and spaceborne radars, can not penetrate the dense rain shafts of hurricanes that enshroud the highly dynamic region where intensification processes take place.


Over the past two decades, tremendous progress was made in forecasting the track a tropical storm will take and where it will reach land, however, forecasting models for storm intensity have not shown much improvement. CYGNSS was conceived to address the fundamental need for hard data on tropical storm development and intensification to improve storm intensity forecast models – an important factor in the assessment of the danger to life and property posed by a storm system.

Because storms can intensify very rapidly, CYGNSS has been designed for optimized coverage over the tropics, taking almost three dozen wind measurements all across the tropics every single second – thus accomplishing a revisit time of only a few hours. Conventional weather satellites in polar orbit – while achieving full global coverage – only pass over low-latitude locations once every two days and are of no use when studying rapidly changing storms.

Built by the Southwest Research Institute, each CYGNSS satellite hosts an antenna payload and associated processing electronics to collect direct signals from the GPS constellation as well as up to four reflected signals. This measurement, known as bi-static scatterometry, delivers information on sea surface roughness which corresponds to wind speed over the ocean surface.

CYGNSS can be thought of as the receive-part of a radar system with the GPS constellation, orbiting over 20,000 Kilometers in altitude, acting as the transmitter. Only fitting receiving antennas and electronics on the spacecraft enabled engineers to build the observatories to the size and weight specifications imposed by the light-lift Pegasus XL launch system.

Hidden underneath the protective payload fairing of their Pegasus rocket, the eight CYGNSS observatories are bolted around a pair of cylindrical Deployment Modules built by Sierra Nevada Corp. Once in space, the CYGNSS birds will unfurl a 1.7-meter solar wing which the satellites will also use as an orbital brake to enter a precisely maintained constellation, collecting measurements between 35-degrees north and south latitude where most of the world’s cyclones occur.

Called upon to deliver the CYGNSS observatories to orbit is an unusual rocket – Orbital ATK’s winged Pegasus XL. Affixed to the underside of an L-1011 carrier airplane nicknamed ‘Stargazer,’ Pegasus will be dropped over a precise location in the Atlantic Ocean and blaze into orbit powered by three solid-fueled rocket stages.

L-1011 and Pegasus completed a cross-country flight on December 2nd after undergoing pre-flight processing at Vandenberg Air Force Base in California, the rocket’s main operations site with facilities for the assembly of the 17-meter long launch vehicle and integrating it with its multi-satellite payload.

Typically, L-1011 takes off from Vandenberg or the Kwajalein Atoll in the Pacific to dispatch Pegasus, but as a mission aiming for the Hurricane corridor, CYGNSS will be launched from the Atlantic Ocean.

The CYGNSS mission marks the first Pegasus launch in over three years and the first taking off from Florida in over a decade.

Pegasus began its career back in 1990, dropped from a B-52 bomber before switching to the trusted L-1011 with the inauguration of the more-powerful Pegasus XL in 1994. Overall, Pegasus supported 42 missions to date with a failure-free record of two decades and 28 missions.

Since arriving at Cape Canaveral Air Force Station, the Pegasus team completed a Combined Systems Test of the rocket and its payload followed by a launch dress rehearsal on Friday. The Launch Readiness Review on Saturday provided clearance for wheels-up Monday morning, pending closure of one minor item related to wire ties on the winged rocket.

Flight crews will board the L-1011 bright and early on Monday, around two and a half hours prior to the planned launch time and the 1970s-era plane will take off at T-65 minutes to reach the planned drop zone 160 Kilometers east of Florida’s coast line.

Sending Pegasus on its way requires the skills of the L-1011 pilots to maneuver into a narrow corridor when T-0 arrives to command the rocket to drop. Additionally, Pegasus employs a completely manual countdown operation, relying on the console operators aboard the Stargazer craft to command the rocket through its activation sequence.

Climbing to an altitude of 12.4 Kilometers, pilot Don Walter will put the aircraft onto the precise launch azimuth for the CYGNSS mission, cruising at a speed of 660 Kilometers per hour. The drop is scheduled for 13:24 UTC, five minutes into a one-hour launch window – the time of the actual drop may vary by a few minutes depending on the progress of the aircraft toward the drop zone.

Weather forecasters have issued a 60% chance of launch weather rule violations due to a concern of cumulus clouds in the drop zone during Monday’s opportunity with the backup slot on Tuesday looking more optimistic at an 80% chance of favorable weather.

The rocket’s top-mounted wing with a span of 6.7 meters will deliver the lift to pitch the nose up while rear-mounted fins are in charge of steering for the first minute of the flight while Pegasus cuts through the atmosphere. Pegasus will pass Maximum Dynamic Pressure 31 seconds after ignition and the first stage still continue powering the vehicle until T+1 minute and 17 seconds – tasked with accelerating the rocket to a speed of nearly three Kilometer per second.

At the point of stage separation, 93 seconds into the flight, the ten-meter long first stage will take the rocket’s wing with it – setting up for the ignition of the second stage, a 16,000 Kilogram-force solid rocket motor. The second stage, 3.1 meters long and 1.3 meters in diameter, will fire for 71 seconds to lift the rocket out of the atmosphere.

Separation of the two payload fairing halves is planned two minutes and 12 seconds into the mission when Pegasus passes 116 Kilometers in altitude where aerodynamic friction can no longer harm the stacked satellites. When thrust on the second stage tails off, Pegasus will be 174 Kilometers in altitude, flying 5.8 Kilometers per second.

After burnout of the second stage, Pegasus enters a three-minute and 49-second passive flight phase to coast uphill in order to reach an altitude of 486 Kilometers so that the firing of the third stage can inject the vehicle into a circular orbit. The third stage will ignite six minutes and 48 seconds into the flight, soaring to a thrust of 3,300 Kilogram-force to finish the job of lifting the CYGNSS satellites into orbit via a 67-second rocket burn.

The mission is aiming for a circular orbit 510 Kilometers in altitude, inclined 35 degrees with orbital insertion expected seven minutes and 56 seconds into the flight. A cold gas reaction control system will then be responsible for orienting the upper composite for the start of spacecraft separation at T+12:56.

Spaced by 30 seconds, the CYGNSS observatories will be set free in pairs that are pushed off into opposite directions. The satellite deployment sequence has been carefully planned to create an initial separation of the satellites to avoid any close encounters in the days and weeks after liftoff.

The last CYGNSS pair is expected to be sent on its way 14 minutes and 26 seconds into the flight, marking the completion of the Pegasus mission. Once in orbit, the satellites will stabilize their orientation and prepare for first contact with the ground.

All satellites should be accounted for by T+3 hours after phoning home and sending back status telemetry to confirm all observatories are healthy and ready to head into a two-month commissioning phase. By carefully controlling drag on each satellite, the observatories will be phased into an orbital constellation with around 5,000 Kilometers separating each constellation member to initiate science operations in early 2017.