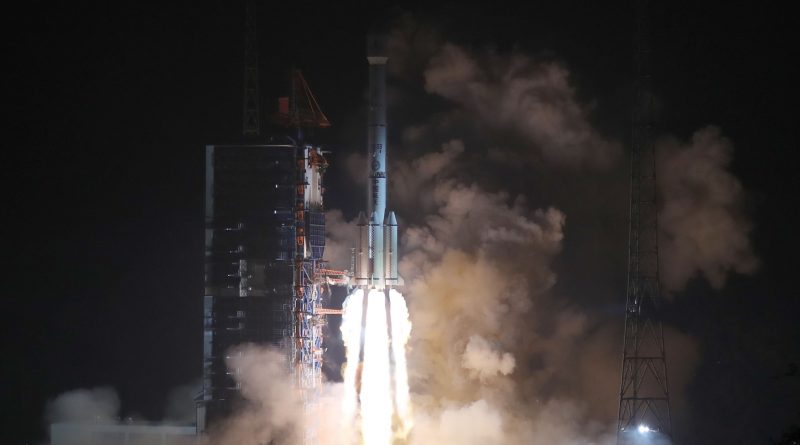 Long March 3B rocketed into the night skies at 16:11 UTC on Saturday, eleven minutes after midnight at the launch base in Southwest China – embarking on a half-hour ride to deliver the Fengyun-4A satellite into an elliptical Geostationary Transfer Orbit.

Saturday night’s mission marked the opening salvo in a busy end-of-year push with another four or five orbital launches expected from the Chinese territory before the end of 2016. China’s TanSat mission to study carbon dioxide and its effect on the global climate is set for liftoff on the 19th, followed by a December 26 launch of a pair of Gaojing Earth-imaging satellites. Also planned for the second half of the month is another Long March 3B mission from Xichang with an experimental communications satellite and the third launch of China’s ‘Speedy Vessel’ Kuaizhou launch vehicle.


Fengyun – Chinese for ‘Winds and Clouds’ – is the country’s primary meteorological satellite program, operating a combination of Geostationary and Low Earth Orbit Satellites as has become a common architecture for weather-monitoring constellations operated by a number of nations. The low-orbiting craft are responsible for gathering high-resolution data on atmospheric conditions a few times a day while the Geostationary satellites deliver data over a large area several times per hour.

The Fengyun program saw its first launch back in 1988 when the Fengyun-1A satellite was launched into a Sun Synchronous Orbit, followed by FY-1B two years later. Development of the Geostationary Fengyun series, known as FY-2, started in the 1980s, but a planned 1994 liftoff was pushed back due to an accident occurring when fueling the FY-2A satellite for launch – claiming the life of one technician and injuring 20 more, setting back the program by three years for a full re-design of the satellite’s propulsion system.

The FY-2 satellites are spin-stabilized spacecraft and host a five-channel multi-spectral Earth-imaging instrument, capturing one full-disk view of the planet every half hour, and a space environment monitoring suite to provide data on space weather phenomena.

In order to keep up with the current state of Earth observation technology, China initiated the development of new Fengyun satellites with Fengyun-4 taking over in Geostationary Orbit and Fengyun-3 replacing the low-orbiting FY-1 satellites to generate more advanced data products at four times the resolution FY-1 could achieve.

The new and improved Fengyun-4 satellite series switches to a three-axis stabilized bus that permits a much higher observation efficiency and also allows the satellite to employ a more diverse sensor complement. The 5,300-Kilogram Fengyun-4A satellite hosts an Advanced Geosynchronous Imager as its main instrument, capturing a full view of Earth every 15 minutes in 16 spectral channels for Earth surface monitoring and cloud observation at a resolution between 0.5 and 4 Kilometers.

A new development is the Geostationary Interferometric Infrared Sounder that hosts a large 913-channel detector to capture data on the internal constitution of the atmosphere at a 16-Kilometer resolution. FA-4 also hosts a Lightning Mapper that pin-points every lightning strike occurring over China with day and night coverage to assist in the prediction of severe weather. A Space Weather Suite captures data on energetic particles arriving at Earth as well as the planet’s magnetic field responsible for particle motion around Earth which can have implications on space weather phenomena.

Fengyun-4A is considered a pathfinder mission to put the new instruments to the test before the first operational satellite is launched in 2018 which will achieve better sounding performance and also hosts a dedicated solar ultraviolet and X-ray telescope to keep close tabs on solar activity.

The Fengyun-4 satellite generation is expected to be expanded by a second satellite type in the 2020s, featuring a microwave-sensing instrument to address the need for three-dimensional atmospheric data at high time resolution.

Responsible for lifting the heavy Fengyun-4A satellite into Geostationary Orbit was Long March 3B/E – the heavy-lifter in China’s established class of rockets that was expanded earlier this year by the more-powerful Long March 5 and 7 launch vehicles.

At 00:10:00 a.m. local time Sunday, Long March 3B/E ignited its boosters and core stage that soared to a collective liftoff thrust of 604 metric-ton-force. Thundering off four seconds later, the rocket rose from its pad, lighting up the night skies over the Xichang launch base in the Sichuan province. After a vertical ascent of a few seconds, the rocket began to pitch and roll onto its planned ascent path, taking it south-east across China before passing over the Pacific Ocean.

With all engines firing at full throttle, Long March 3B/E burned 2,350 Kilograms of propellant per second as it started racing uphill and making its way downrange, passing Mach 1 and encountering Maximum Aerodynamic Pressure. Each of the four boosters delivered 75,500 Kilogram-force of additional thrust to the vehicle using a single DaFY-5-1 engine.

The boosters consumed their propellant load of 41,200kg, each, over the course of a burn of 140 seconds after which they dropped away from the three-stage rocket.

With the boosters gone, the Core Stage continued powering the vehicle using a DaFY-6-1 cluster of four engines, delivering 302 metric tons of thrust. Overall, the 24.8-meter tall first stage launched with a propellant load of 186,200 Kilograms that was expended in two minutes and 38 seconds. Immediately after engine cutoff of the first stage, the second stage commanded its four-chamber vernier engine of the second stage to ignite as part of the hot-staging sequence employed by the Long March 3B.

The Low Earth Parking orbit, around 190 Kilometers in altitude, was reached after a third stage burn of around four minutes and 45 seconds, marking the start of a coast phase of 11 minutes to allow the stack to fly to a position where the second burn could be performed around the equator passage so that the high-point of the orbit would be placed over the equator.

Separation of the Fengyun-4A satellite occurred right at the T+26-minute mark and launch was declared a success by officials.