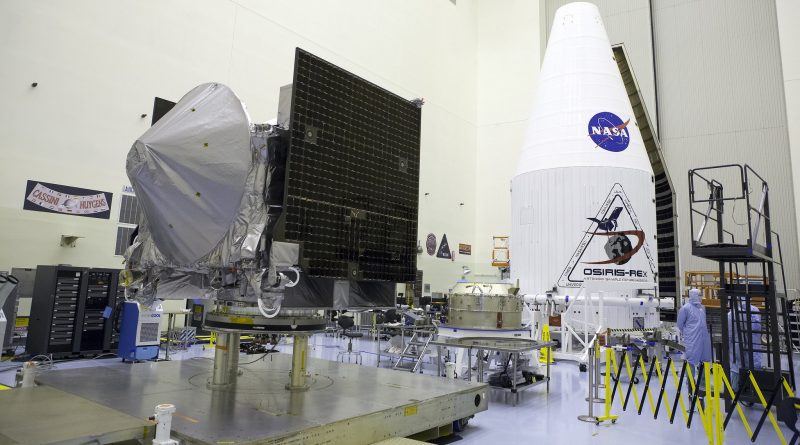 NASA’s OSIRIS-REx Asteroid Explorer has taken its seat atop a United Launch Alliance Atlas V rocket that will give the spacecraft a boost next week to escape the Earth and set sail on a seven-year journey to asteroid Bennu and back to accomplish the first U.S. sample return from an asteroid.

Liftoff is scheduled for September 8 at 23:05 UTC – the opening of a two-hour launch window and OSIRIS-REx will ride the Atlas V rocket for one hour before being set free on its ambitious journey to the mountain sized asteroid that is considered one of the most threatening asteroids because it comes close to Earth every six years and a future impact can not be fully ruled out.


OSIRIS-REx, built by Lockheed Martin, is NASA’s third New Frontiers mission following in the footsteps of the New Horizons spacecraft that visited Dwarf Planet Pluto last year and Juno, having entered orbit around Jupiter last month for an unprecedented mission of discovery.

The OSIRIS-REx spacecraft is outfitted with a series of cameras, a laser altimeter to study the topography of the asteroid, and three spectrometers covering the X-ray, visible and infrared wavelengths. Also installed on the spacecraft is an arm with a sampling device that will come into contact with the asteroid’s surface in a deliberate touch-and-go maneuver in 2020 to collect up to two Kilograms of sample material.

OSIRIS-REx is an acronym for “Origins, Spectral Interpretation, Resource Identification, Security, Regolith Explorer.” The mission has been named after the Egyptian mythological god Osiris, the lord of the dead roaming the underworld. This name was chosen for the mission as asteroid Bennu is a potential Earth-impactor capable of bringing vast destruction and death.

OSIRIS-REx is expected back on Earth on September 24, 2023, delivering its sample in a pristine Sample Return Capsule that will complete a high-speed re-entry and parachute-assisted landing in a test range in Utah.

Assembly of the OSIRIS-REx spacecraft and integration of its five instruments was completed in October 2015 ahead of an extensive testing campaign. To reduce risk for the spacecraft’s seven-year mission, OSIRIS-REx uses plenty of heritage components flown on the Mars Reconnaissance Orbiter, Juno and the MAVEN spacecraft that have operated successfully for extended mission durations.

The OSIRIS-REx spacecraft was delivered to the Kennedy Space Center in May to begin a phase of final assembly, testing and launch preparations that included loading the spacecraft with 1,245 Kilograms of propellant.

The components of the Atlas V rocket arrived at Cape Canaveral in late July and assembly of the launcher started on August 8 when the RD-180-powered Common Core Booster was installed atop the Mobile Launch Platform. Atlas V, flying in the unusual 411 configuration, received its single Solid Rocket Booster one day later and the trusted Centaur Upper Stage was lifted atop the stack on the 10th.

United Launch Alliance streamlined the assembly sequence of the Atlas V to be able to support a rapid launch cadence, but additional time is taken for interplanetary missions that only have narrow launch windows. As such, the OSIRIS-REx flow included extensive systems testing on the Atlas V starting with a Combined Systems Test and culminating last week with the Wet Dress Rehearsal (WDR).

The WDR, once part of every Atlas V launch campaign, is now only performed for missions with tight launch windows. As part of the test, Atlas V is put through a complete launch countdown and both stages are filled with propellants and pressurant gases to ensure the integrity of all propellant systems. Reaching a mock T-0 point, Atlas V will have run through an entire countdown sequence to ensure everything will be ready on launch day.

This is only the fourth time the Atlas V launches in the 411 configuration, taking advantage of the launcher’s feature of being tailored to specific mission performance needs by adding up to five Solid Rocket Boosters. The 411 configuration stands 58 meters tall and has a launch mass of 381 metric tons and a total thrust of 562.5 metric-ton-force.

The OSIRIS-REx spacecraft was encapsulated in its four-meter diameter payload fairing on August 24 and completed a slow roll to Space Launch Complex 41 in the early hours on Monday. Once the transporter had pulled up to the Vehicle Integration Facility, the payload stack was carefully lifted atop the Atlas V rocket followed by mechanical and electrical integration to mark the completion of the lengthy build-up for this mission.

Still on tap is an Integrated Systems Test to ensure the interplay between launcher and spacecraft will be as expected during the hour-long climb. The Flight Readiness review is set for September 1 and a Mission Dress Rehearsal is planned on the second to put the Atlas V through a final countdown and launch simulation. Pending clearance from the September 6 Launch Readiness Review, Atlas V will return to its launch pad the next day to get ready for liftoff.

Lifting off from Cape Canaveral, Atlas V will stick to a south-easterly heading firing on all cylinders as it passes the speed of sound just 57 seconds after liftoff. The single booster burns out 94 seconds into the flight but Atlas V will hold it for another half minute to ensure an off-shore splashdown. The RD-180 engine will shut down four minutes after liftoff and hand off to Centaur.

Centaur will fire its RL-10A engine twice, first for eight minutes to push the stack into a Low Earth Parking Orbit for a coast phase of over 20 minutes. A second burn of seven minutes will boost the stack to escape the bounds of Earth’s gravity, setting up for the release of the OSIRIS-REx spacecraft 55 minutes after liftoff.

It will take OSIRIS-REx two years to link up with Asteroid Bennu, completing an Earth flyby to boost its velocity in order to make it out to the mission’s target. An exhaustive mapping campaign starts in October 2018 leading up to the culmination of the mission in July 2020 when the spacecraft will make contact with Bennu in a touch-and-go maneuver to collect sample material. OSIRIS-REx departs Bennu in March 2021, entering a ballistic trajectory that intersects the orbit of Earth in September 2023.