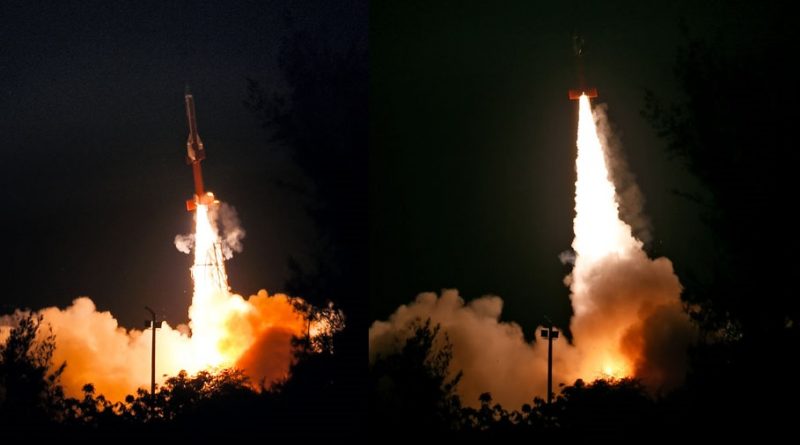 India conducted its first test of a Hypersonic Scramjet Engine on Sunday in a sub-orbital test flight to continue its Reusable Launch Vehicle (RLV) development program that has the ultimate goal of developing a fully reusable Two-Stage To Orbit launch vehicle flying some time in the next 15 years.

This marked the second major test in the RLV development program conducted this year after May’s very successful sub-orbital test of a winged space plane. The May 23 test carried the 6.5-meter long Reusable Launch Vehicle-Technology Demonstrator (RLV-TD) to a speed of six times the speed of sound and an altitude of 65 Kilometers from where the vehicle guided itself to a simulated runway landing off India’s east coast.

The overall goal of the RLV Development Program is a fully-reusable Two-Stage To Orbit (TSTO) launch vehicle incorporating a combination of a classic rocket stage and an air-breathing scramjet engine. Aiming for low cost, reliable and on-demand space access, India’s future re-usable launch vehicle could cut costs for space launches by a factor of ten, the Indian Space Research Organization (ISRO) hopes.

ISRO identified the development of a Supersonic Combustion Ramjet (Scramjet) as one of the biggest challenges in the development program. Extensive work was completed to simulate the hypersonic flow environments and ground based testing in a hypersonic environment was completed. The ATV-D01 mission in 2010 flew a passive Scramjet at a speed of up to Mach 6 to test the materials in flight and collect data in an operational environment without igniting the engine.

India is only the fourth nation to demonstrate a Scramjet Engine in flight.


Scramjets use a high-speed air flow that is forcefully compressed within the engine before combustion, optimized for engine operation at hypersonic speeds. They reach beyond the speeds achievable with turbojet engines and bridge a gap between the efficiency of turbojets and the high speed of conventional rocket engines.

Air is introduced into the engine through an inlet diffuser and, because of the high-speed flow, air upstream of the inlet is compressed within the diffuser before reaching the combustor. The flow speed is slightly reduced prior to combustion after which is its accelerated to a much higher Mach number through the use of a nozzle. Thermal balance within Scramjets are a difficult issue to solve and this type of engine typically requires active cooling schemes and materials withstanding high temperatures.

ISRO’s Scramjet engine design uses Hydrogen as fuel and the atmospheric oxygen injected into the combustor acts as oxidizer. Challenges faced by engineers during development was the hypersonic air inlet and the supersonic combustor as well as the materials used for the components to ensure the engine could withstand the extreme operational temperatures.

For Sunday’s test, a pair of Scramjet Engines were attached to a two-stage sounding rocket known as the Advanced Technology Vehicle (ATV) that features a pair of identical spin-stabilized Rohini RH560-type rocket motors as first and second stage. The total weight of the stack at liftoff was 3,277 Kilograms.

The launch was conducted at 6:00 local time on Sunday (0:30 UTC) and the ATV accelerated the two Scramjets to a speed of Mach 6 for the initiation of the short test. The two engines were fired 55 seconds after launch and operated for only five seconds to validate a number of critical technologies including the ignition sequence at high speed, the air intake mechanism and fuel injector.

Data delivered from the vehicle showed good pressures within the engines and the acceleration supplied by the Scramjets on top of the rocket’s acceleration was seen in telemetry data.

The second stage of the rocket burned out shortly after the twin engines finished their test and the vehicle was in the air for a total of five minutes, peaking at 70 Kilometers before splashing down in the Bay of Bengal around 320 Kilometers from the Sriharikota launch site.

In a statement, ISRO describes Sunday’s test as “a modest yet important milestone in its endeavor to design and develop advanced air breathing engines including engines for ISRO’s future space transportation system.”

Development on India’s Scramjet will continue to achieve a sustainable operation of the engine in the hypersonic flight regime before its introduction on the RLV-TD space plane. Flying the RLV-TD with a Scramjet will be the culmination of the current test program, but is still several years in the future. The test would see the RLV-TD blasting off atop a rocket to accelerate to a speed sufficient for the Scramjet to begin operation ahead of a guided return to a runway that is being established at the Satish Dhawan Space Center.

Making slow but continuous progress, India aims to debut its operational reusable launch vehicle in around 15 years time. The operational version of the vehicle would be at least five times the size of the RLV-TD testbed and feature a combination of air-breathing propulsion and conventional rockets – enabling the first stage to complete a fly-back to a runway and the second stage to return from orbit after the completion of its mission.