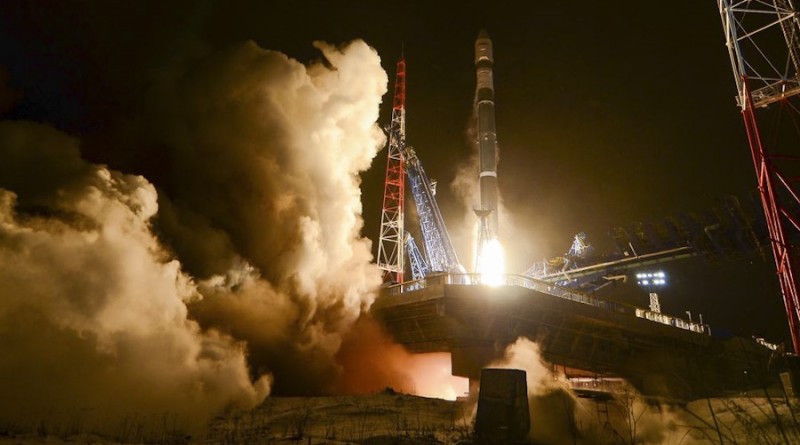 In the wake of Saturday’s Soyuz 2-1v launch with a pair of Russian military satellites, media reports emerged on Sunday, claiming that one of the two satellites failed to separate from the rocket’s Volga upper stage. The light-lift version of the Soyuz rocket carried the Kanopus ST satellite reportedly hosting a payload to detect and track submarines in the world’s oceans, and a passive radar calibration sphere to orbit. No information has come forward which of the two satellites had failed to deploy from the rocket.

Liftoff from Site 43/4 at the Plesetsk Cosmodrome took place at 14:09 UTC on Saturday. The Soyuz 2-1v rocket ascended from the snow-covered launch base under the loud thunder of its NK-33 and RD-0110R engines that lifted the rocket with a total thrust of 188 metric ton-force. The 157,000-Kilogram vehicle swung to the north in order to head to a high-inclination orbit, firing the first stage for a little over two minutes before completing the typical hot-staging sequence – marking the successful return to flight of the NK-33 engine after 2014’s Antares launch failure. The second stage burned its RD-0124 engine for a little under four and a half minutes to boost the stack into orbit.

Prior to launch, navigational warnings were issued for an impact area in the South Pacific Ocean which was understood to be for the second stage splashdown after continuing on a sub-orbital arc after Volga separation, though orbital data suggests the stage reached orbit.


The Volga upper stage was separated around seven minutes into the mission to assume control of the flight for two main engine burns. The first of the burns boosted the stack into an elliptical orbit and was followed by a coast phase to carry the stack to the apogee of the orbit for the circularization maneuver. A successful spacecraft separation was confirmed a little under two hours after launch and the Russian Ministry of Defence confirmed that data from the Kanopus ST satellite was being received.

Later on Saturday, orbital data was published for the objects delivered to orbit on this launch:

Before launch, it was noted the Kanopus ST satellite was targeting a Sun Synchronous Orbit 702 Kilometers in altitude inclined 98 degrees. The satellites delivered to orbit by Soyuz 2-1v were re-named Kosmos 2511 and 2512 in Russia’s naming scheme for military operated satellites.

The secondary payload of this launch is the КЮА 1 calibration sphere that is similar to the SKRL-756 radar calibration spheres that went up on the maiden launch of the Soyuz 2-1v in late 2013. The polished sphere has a mass of 16 Kilograms and was affixed to the side of the cylindrical payload adapter sitting atop the Volga Upper Stage

On Sunday, reports were published in Russian media citing Defence Ministry sources claiming that only one of the two satellites was separated from the Volga Upper Stage while the other remained attached to its payload adapter. This would suggest that Object C represents the Block I second stage of the Soyuz 2-1v rocket and objects A and B are the separated satellite and the Volga upper stage.

On Sunday, Russian media outlets reported that the satellite that failed to deploy was indeed Kanopus ST, the primary payload of this mission. These reports also indicated that the payload stack would be deorbited. The method of deorbitation – either via the Volga upper stage or the Kanopus satellite was not disclosed.

Later in the day, orbital data published by the Joint Space Operations Center showed that a significant maneuver had been performed, lowering the orbit of object 2015-071A:

The Kanopus-ST satellite is a small remote sensing spacecraft. It enters a program that is operated in a dual-use fashion, delivering data for civilian and military applications.

According to official documentation, Kanopus ST hosts a Microwave radiometer with a conical scanning geometry achieving a swath width of 2,200 Kilometers and a resolution of 12 to 160 Kilometers, and a multi-spectral imaging system covering the visible wavelengths across a 1,000-Kilometer swath, reaching a spatial resolution of 30 to 50 meters.

Comments made by Russian Military Officials in 2010 indicated that the Kanopus ST satellite would be capable of scanning the underwater areas for submarines, however, the published specifications would not permit such a detection. The relative lack of information on the satellite’s payloads and the secrecy surrounding its launch may suggest a more military-oriented role of the mission.