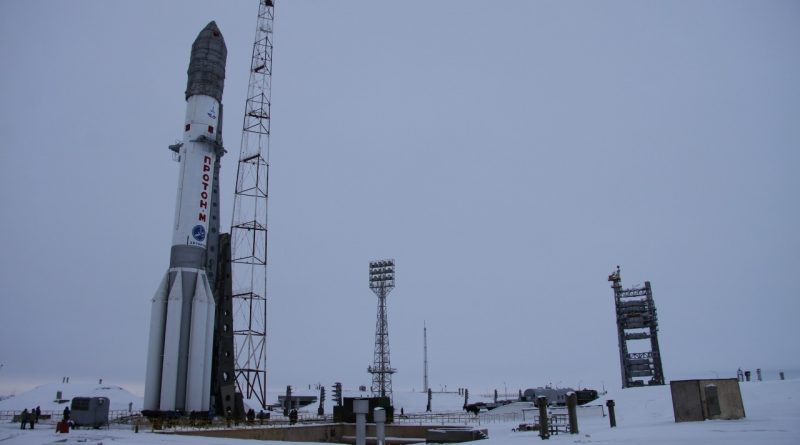 Update (December 7): The Launch of the Proton-M rocket carrying the Garpun military communications satellite has been delayed by three days to December 13. No reasons were given for the postponement.

A Russian Proton-M rocket has been rolled to the launch pad on Sunday in preparation for the launch of the second Garpun military communications satellite. Liftoff from Site 81/24 of the Baikonur Cosmodrome is planned for 0:17 UTC on December 10 to mark the start of a standard ascent mission of the three-stage Proton-M rocket followed by a nine-hour flight of the Briz-M upper stage for a direct insertion into Geostationary Orbit.


The Garpun satellites are the replacement for the Potok/Geizer satellites that were inaugurated in 1982 to relay data from optical reconnaissance satellites. The final Potok satellite was launched in 2000 and stopped operating in 2009, creating a gap in relay capability as the Garpun follow-on program was not ready for its originally intended launch target of 2009.

No details on the launch preparations flow for the second Garpun satellite were available except that the satellite had to wait for several months for a clearing in the launch schedule of Proton followed by a lengthy delay due to the failed launch of MexSat-1 in May.

Earlier this week, the 58-meter tall Proton rocket was rolled over to the fueling station where the vehicle was booked for a two-night stay, facilitating the hazardous operation of loading the low-pressure propellant tanks of the Briz-M upper stage with 19,800 Kilograms of toxic Unsymmetrical Dimethyl-hydrazine fuel and Nitrogen Tetroxide oxidizer.

On Sunday, at the traditional early morning hour, Proton-M made its trip to the launch pad at Site 81/24 slowly riding atop rails, supported by the Transporter Erector Device that was used as soon as the vehicle arrived at the launch pad to place Proton in its vertical launch position.

With Proton at the pad, teams secured the vehicle and rolled the Service Structure up to the launcher to provide access platforms for a detailed testing campaign that is performed before the Proton can head into countdown operations. Also, final close-outs of launch vehicle systems are performed to get ready for the launch countdown. The satellite team will be watching over the spacecraft and perform final battery charging ahead of the countdown.

Countdown Operations will get underway on Wednesday, 11 hours and 30 minutes prior to launch with the activation of the Briz-M upper stage that will undergo a detailed set of tests before receiving its flight software. Teams will be busy closing out the Proton rocket and making final preparations for propellant loading that gets underway shortly after Proton is powered up at the T-6-hour mark.

Over the course of the three-hour fueling operation, Proton receives 622 metric tons of hypergolic propellants. Once fueling is complete, teams will finish final hands-on work on the launch vehicle leading up to the removal of the Service Structure at T-1 hour and heading into final countdown operations culminating in the Automated Countdown Sequence starting five minutes prior to launch to transfer Proton and Briz-M to internal power and internal control.

Igniting its six RD-275M engines at 0:17 UTC on Thursday, Proton will thunder off with a total thrust of 1,014 metric ton-force.

After a short vertical ascent, Proton will conduct a roll maneuver to align itself with a launch azimuth of 61.3 degrees. The first stage will burn for nearly two minutes, consuming 419 metric tons of propellants to send Proton on its way. The second stage, powered by four RD-0210/0211 engines, will burn its load of 156 metric tons of propellant in just over three minutes and 20 seconds. At T+5:27, the third stage will separate under the power of its four-chamber vernier engine to set the stage for main engine start on a burn of four minutes. Separation of the payload fairing occurs 20 seconds into the third stage burn.

Nine minutes and 42 seconds after liftoff, the Briz-M upper stage is separated from the Proton. After a coast of just over 90 seconds, the Upper Stage will ignite its S5.98 main engine for its first burn that delivers the vehicle into a Low Earth Parking Orbit of a little under 200 Kilometers in altitude.

Burns two and three occur at perigee in the ascending node of the orbit in order to raise the apogee to geostationary altitude. The two burns are separated by a coast of about two hours and the Auxiliary Propellant Tank is separated after the third burn. What follows is a long coast phase all the way up to apogee for the fourth burn that raises the perigee and reduces the inclination in order to circularize the orbit at geosynchronous altitude for spacecraft separation around nine hours into the mission.