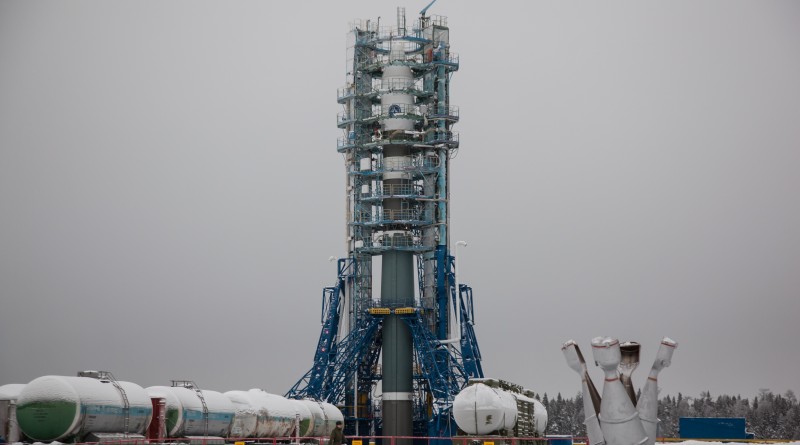 Update: The Soyuz 2-1v Rocket carrying the Kanopus ST satellite lifted off from Site 43/3 at the Plesetsk Cosmodrome on Saturday at 14:09 UTC. Russian media reported a successful separation of the Volga upper stage after a nominal ascent of the two-stage Soyuz rocket. Confirmation of launch success will be provided after spacecraft separation, expected over one hour into the mission.

Mission Success has been confirmed: Read our Launch Recap

A Russian Soyuz 2-1v rocket is set for liftoff from the Plesetsk Cosmodrome on Saturday after its launch was delayed on Friday due to technical issues with the payload. Hidden under the payload fairing of the Soyuz rocket is the Kanopus ST ocean and weather research satellite that is to become a part of the Kanopus program serving a dual role under military and civilian operation. Some reports indicate the satellite’s military application will be to detect submarines in the world’s oceans.

This will only be the second flight of the Soyuz 2-1v rocket building on the launcher’s successful maiden flight in December 2013. Although part of the Soyuz fleet, the 2-1v version is very different from the other Soyuz versions – not using the four characteristic boosters and featuring a different first stage propulsion system among other changes to the Block A stage to create a launcher suitable for smaller payloads.


Soyuz 2-1v stands 44 meters tall and weighs 157 metric tons, using Liquid Oxygen and Kerosene propellants. The first stage, a modified Block A, is 2.95 meters in diameter and on its business end hosts a single NK-33 main engine coupled with a four-chamber RD-0110R that assists in propulsion and is in charge of steering the vehicle. The first stage is loaded with 120 metric tons of propellants consumed in a burn of two minutes.

Sitting atop the first stage is a conventional Block I (mod.) as used on the Soyuz 2-1B rocket. Measuring 2.66m in diameter and 6.74m in length, the stage is loaded with 25,400kg of propellants for consumption by a 294kN RD-0124 engine. To complete the orbital insertion and provide flexibility in the vehicle’s flight profile, Soyuz 2-1v employs a newly developed Volga upper stage, hosting a low-thrust engine with re-start capability.

The launch of Soyuz 2-1v marks the first flight of the NK-33 engine after a similar engine was identified as the cause of the failure of the Antares rocket in October 2014 that led to the loss of the Cygnus Orb-3 cargo spacecraft. NASA’s Independent Review Team identified the probable causes of the failure – a sensitivity of the Hydraulic Bearing Assembly and thrust bearing of the LOX turbopump that can lead to reliability issues, and a material defect introduced in this and another failed engine during manufacturing.

The NK-33 engine had encountered a number of issues in recent years. In 2011, an AJ26 engine failed on the test stand at the Stennis Space Center when it caught fire due to a Kerosene leak in an engine manifold caused by corrosion cracks in the high-pressure system of the engine. In May 2014, an AJ26 engine exploded on the test stand during a routine acceptance test and forensic analysis conducted on this engine showed a similar material defect as found on the E15 engine in the ill-fated Orb-3 mission.

The NK-33 engines were built in the 1960s and 70s by the Kuznetsov Design Bureau for the Soviet N1 Moon Rocket. The engines never flew on the N1 since the program was ended after all test launches of the rocket ended in failure and the race to the Moon was long lost.

Aerojet Rocketdyne purchased 43 NK-33 engines that were imported to the U.S. and outfitted with modern engine controllers and thrust vector control systems to be used on American launchers under the AJ26 designation.

NK-33 is a regeneratively cooled staged combustion engine with oxygen-rich preburners to drive the turbopumps. The engine operates at a high chamber pressure of 145 bar and provides a maximum sea level thrust of 1,630 Kilonewtons with an engine dry weight of 1,235kg. The engine can lift 137 times its weight and provides a vacuum impulse of 331s. Maximum vacuum thrust is 1,815kN.

In terms of thrust-to-weight ratio, the engine is one of the most powerful in the world, only falling short to the SpaceX Merlin 1D engine that is used on the Falcon 9 rocket.

NK-33 provides throttle capability from 56 to 108% of rated performance, however its full thrust setting during flight is usually 105%. In tests, NK-33 achieved 135% of rated performance thrust without failing. NK-33 uses Kerosene as fuel and requires sub-cooled Oxygen with a temperature below its boiling point of -183-degrees Celsius to cool the turbopump bearings that would otherwise fail.

Despite the issues uncovered by NASA associated with the old-aged engines, the Russian Soyuz 2-1v rocket will continue the use of NK-33 as its first stage main engine. In response to the Antares failure, the NK-33 engines to be used by Soyuz 2-1v were outfitted with modified combustion chambers and new ignition chambers – two components not identified as a culprit by NASA that focused on the turbopump in its analysis.

The modified NK-33 engine went through a hot-fire test to certify it for the use aboard the Soyuz 2-1v. It should be noted that the engine used on Antares also went through an acceptance testing campaign and still failed a few seconds after liftoff.

Liftoff of the Soyuz 2-1v rocket is expected around 14 UTC on Saturday from Site 43/3 at the Plesetsk Cosmodrome. Navigational warnings show the rocket’s planned flight path almost due north, targeting a sun synchronous orbit. Firing the NK-33 engine for around two minutes, Soyuz will climb out of the atmosphere to begin heading towards orbit, its RD-0110R engine will deliver 12% of the vehicle’s total thrust, contributing to overall vehicle performance and completing the steering function during first stage flight.

Soyuz 2-1v uses the established hot-staging sequence in which the RD-0124 engine of the Block I upper stage is fired moments before stage separation so that it can push the two stages apart, setting the spent core up for splashdown in the Barents Sea. The second stage will fire for close to four and a half minutes and boost the vehicle’s velocity to near orbital speed. During the burn, the protective payload fairing will be separated.

When the second stage has burned out, the Volga upper stage will be separated to begin a mission comprised of two burns. The new Volga Upper Stage is a small hypergolic rocket stage that enables Soyuz 2-1v to fly complex mission profiles in order to reach a variety of orbits. The stage uses a variable propellant load of 300 to 900 Kilograms for consumption by a single main engine providing 2.94 Kilonewtons of vacuum thrust and a reaction control system comprised of a number of thrusters.

The initial burn of Volga aims to place the stack into an elliptical Parking Orbit followed by a coast phase to allow the stack to climb all the way up to the apogee of the orbit so that the second burn can act as a circularization maneuver. Kanopus ST is reportedly aiming for a sun synchronous orbit 702 Kilometers in altitude.

The Kanopus-ST satellite is a small remote sensing spacecraft weighing in at around 350 Kilograms. It enters a program that is operated in a dual-use fashion, delivering data for civilian and military applications. According to official documentation, Kanopus ST hosts a Microwave radiometer with a conical scanning geometry achieving a swath width of 2,200 Kilometers and a resolution of 12 to 160 Kilometers, and a multi-spectral imaging system covering the visible wavelengths across a 1,000-Kilometer swath, reaching a spatial resolution of 30 to 50 meters.

Comments made by Russian Military Officials in 2010 indicated that the Kanopus ST satellite would be capable of scanning the underwater areas for submarines, however, the published specifications would not permit such a detection. The relative lack of information on the satellite’s payloads and the secrecy surrounding its launch may suggest a more military-oriented role of the mission.