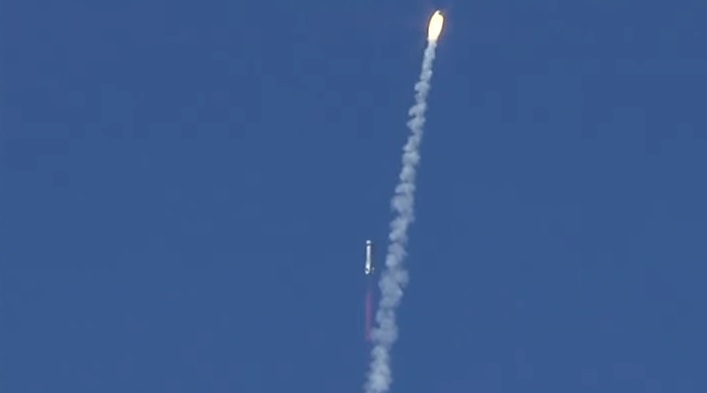 It was a dramatic day at Blue Origin’s West Texas launch site where on Wednesday the company’s New Shepard sub-orbital launch vehicle conducted a fiery in-flight abort test to demonstrate a crew could safely escape from a failing booster.

The New Shepard Booster – contrary to the company’s expectations – managed to cheat death and survive the turbulent escape maneuver to continue its fifth trip to the edge of space and back.

The test was a critical step on Blue Origin’s path to crewed missions on New Shepard both for space tourism and microgravity science, expected to begin in the next year or two when the vehicle’s test program is complete.

New Shepard was wheeled three Kilometers from its hangar to the launch pad in the very early hours on Wednesday, well before sunrise at the Van Horn test site. Placed in a vertical position, the Booster and Crew Capsule went through a final set of checkouts before supercold Liquid Hydrogen and Liquid Oxygen were loaded into the rocket.


This particular booster had flown to the edge of space and back four times before Wednesday’s mission including the test flight in June that demonstrated the Crew Capsule could make a safe landing with one of its three parachutes disabled.

Testing the redundancies and safeguards on the New Shepard launch system is a critical step toward crewed missions and Wednesday’s test marked the most complex of all – demonstrating the Crew Capsule could safely move away from a failing rocket and parachute to a soft landing.

The Crew Capsule – now with six high-altitude flights under its belt – conducted a Pad Abort Test back in 2012 to show a crew could safely escape a catastrophic booster failure at any point after the crew boards the vehicle on the pad. This test used the capsule’s solid-fueled escape motor to catapult it off the ground and to an altitude of over 700 meters for a safe parachute deployment and soft landing.

Wednesday’s test was much more ambitious – aiming to show a safe escape was possible during the most stressful portion of the powered ascent phase with the Booster running at full thrust and passing through Maximum Dynamic Pressure.

New Shepard needed two runs of its terminal countdown after a minor anomaly emerged during final checks in the first attempt, delaying the launch by around 40 minutes.

The Booster soared to life when clocks hit zero, igniting its 50-metric-ton-force BE-3 engine for seven seconds of thrust build-up and engine monitoring.

Released from its launch pad, New Shepard took to clear skies over West Texas for what was expected to be a very eventful test flight. The vehicle made a divert maneuver ahead of a straight-up ascent, climbing to an altitude of 4.8 Kilometers and aiming for a speed of 240m/s at the time the abort was intentionally triggered.

The Abort Command was issued at T+46 seconds, and the Crew Capsule immediately initiated the rapid escape sequence – severing all structural connections with the booster through redundant separation systems and firing the solid-fueled abort rocket.

Riding on a column of fire and smoke, the Crew Capsule pulled clear of the still-firing booster and diverted from its flight path. The Escape Motor only fired for 1.7 seconds, but delivered a thrust of 31,500 Kilogram-force, allowing the capsule to pull clear of the Booster and begin a coast toward the peak of its sub-orbital arc.

Activating its Reaction Control System, the Crew Capsule pulsed its thrusters to recover from the tumble it was sent into by the powerful rocket motor prior to deploying its three small drogue chutes that stabilized its descent.

The blue-and-orange main chutes made a clean deployment under two Kilometers in altitude and slowed the capsule to a quiet descent. Moments before reaching the ground, the Crew Capsule fired its soft landing thrusters to cushion the impact – coming four minutes and 15 seconds after lifting off.

From an external perspective, the Abort Test appeared to be a full success with the Crew Capsule making a soft landing on the desert floor. However, Blue Origin will spend several weeks with an exhaustive review of data to ensure all environments seen in the fiery abort sequence matched the predictions and would keep the crew safe to bring them out of harms way in case any dicey situation arises during an operational New Shepard flight.

For the booster, the journey was not finished when the abort rockets fired. As Blue Origin had hoped, the Booster remained intact and successfully battled a rapidly changing aerodynamic environment as well as the thrust of the departing capsule. Because the booster was not designed for this type of flight environment, there was a significant chance of losing it shortly after the abort followed by an explosive crash landing.

Successfully powering through the transients occurring after the abort with some heavy gimbaling of the BE-3 engine to stay on course, the booster made its fifth trip into space – shutting down the engine at 75 Kilometers in altitude and coasting to an apogee right around 100 Kilometers.

Still healthy after a pretty dynamic climb, the Booster stabilized its atmospheric descent using the forward wedge fins followed by the deployment of eight Drag Brakes that significantly slowed the vehicle’s speed ahead of the landing burn. BE-3 made a clean re-start and brought the vehicle into a constant-velocity descent over its landing pad, making some last minute adjustments while New Shepard deployed its landing gear for touchdown seven minutes and 30 seconds after lifting off.

Loud cheers emerged when the booster made a gentle touchdown and shut down its engine, now looking forward to a well-deserved retirement party after five flights to space.

Both, booster and capsule will not be re-flown after paving the way in a smooth development and testing program for Blue Origin, continuing to push towards crewed test flights and operational service for space tourism and microgravity science.

Loaded into the Crew Capsule for the abort test was a payload of commercial space research and utilization company NanoRacks. The test flight – not intended to reach the microgravity environment needed for science – was dedicated to an operational checkout of the NanoRacks ‘Feather Frame’ system that is built to facilitate a variety of science payloads.

The NanoRacks Feather Frame (NRFF) can hold up to a dozen 10 by 10 by 20-centimeter NanoLabs modules or large payloads up to 23 Kilograms, delivering power, data connectivity, data storage and software support.

The system comes in two versions, one with a 49-liter payload volume and a larger Double Size version with a usable volume of 102 liters. The system can deliver 200 Watts of power, record and store video of the experiment payload and allow for hands-on payload operation once crewed missions get underway.

New Shepard is envisioned to become a platform for science missions of all kinds, offering three minutes of very high-quality microgravity at an affordable cost for experiments that could not be realized on an orbital mission due to budgetary limitations. Additionally, New Shepard – when operational – offers a high launch pace, allowing for repetition of experiments under different conditions or with changed hardware not easily possible with an orbital mission.