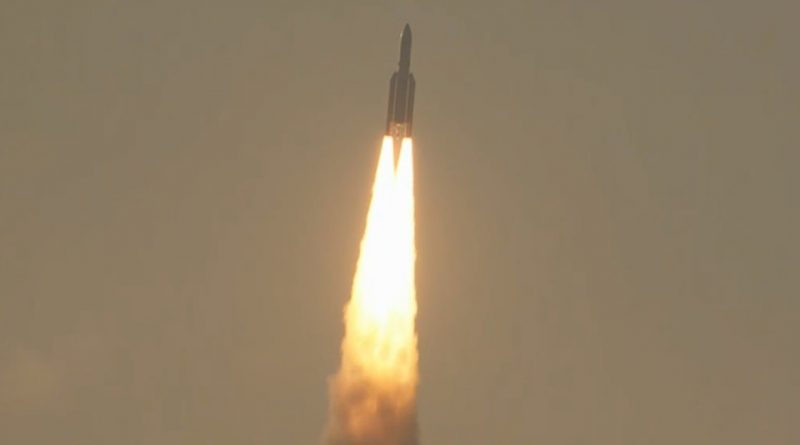 Europe’s Ariane 5 rocket lifted a pair of communications satellites into orbit for Australia and India on Wednesday in another textbook mission that also accomplished a critical test for the launcher’s successor currently in development for a maiden launch in 2020.

The heavy-lifter in Europe’s rocket fleet blasted off from the Guiana Space Center at 20:30 UTC under the loud thunder of its twin Solid Rocket Boosters and cryogenic main engine, swinging to the East for the vehicle’s fifth flight to Geostationary Transfer Orbit in 2016. Powered flight was by the book followed by an eight-minute sequence to deploy the Sky Muster II and GSAT-18 satellites into their highly elliptical orbits.

The primary mission was to be followed by 40 minutes of in-orbit maneuvering to allow an instrument suite to gather data on the behavior of the second stage’s cryogenic propellants during an extended coast phase – critical information needed in the development of a propellant management system for the Ariane 6 rocket’s re-startable second stage.


Named VA231 in Arianespace’s numbering system, the mission had to be delayed from its original Tuesday launch slot due to unfavorable upper level winds that had taken a trend to the worse over the weekend. Winds aloft were tracked closely early in the day on Wednesday, showing that conditions would permit a liftoff in the late afternoon, local time.

Ariane’s task was lifting a total payload of 10,663 Kilograms into a highly elliptical Geostationary Transfer Orbit comprised of two satellites – Sky Muster II for Australia and the Indian GSAT-18 spacecraft.

Sky Muster II is the second in a two-satellite constellation operated by NBN – National Broadcast Network to deliver high-speed Internet services to remote areas in Australia to bridge the digital divide between areas with fiber access to those who do can not access equivalent terrestrial services.

The total government investment into the Sky Muster infrastructure is around A$2 billion and comprises the two satellites in orbit, their ground segment, and additional ground infrastructure development. Both satellites were built by Space Systems Loral and each hosts 202 Ka-Band-equivalent transponders to deliver over 100 communications spot beams with a total throughput of 80 Gigabits per second.

The system entered service earlier this year using the first Sky Muster satellite lofted by an Ariane 5 in October 2015. Once at full capacity, the two Sky Musters will be able to deliver services to 400,000 homes and businesses with coverage available in remote areas of the outback, Australia’s coastal islands and a far as Antarctica.

Weighing in at 6,400 Kilograms and standing 8.5 meters tall, Sky Muster II was affixed to the top of the Sylda adapter, riding in Ariane’s upper payload berth.

India’s GSAT-18 spacecraft made its way into orbit in the lower slot, installed directly on the rocket’s second stage and hidden beneath the Sylda. Built by the Indian Space Research Organization, the satellite will join the Indian National Satellite System to provide replacement coverage for older spacecraft and expand India’s data and media distribution capabilities.

Based on the I-3K satellite bus, the satellite weighs in at 3,400 Kilograms and hosts a multi-band payload with 48 transponders in the Ku, C- and Extended C-Band frequency ranges to support television, telecommunications, Digital Satellite News Gathering and VSAT services across the Indian territory.

GSAT-18 was the 20th launch contracted to Arianespace by ISRO in a very successful business relationship dating back to 1986. India relied on foreign launch opportunities for the past decades due to a lack of an indigenous launch vehicle which ISRO hopes to change in the very near future with its Geosynchronous Satellite Launch Vehicles ending their testing phase and establishing a steady flight rate.

Ariane 5 enjoyed a smooth countdown on Wednesday, coming back from a one-day delay due to unfavorable upper level winds on Tuesday. Lighting up its Vulcain 2 main engine and powerful rocket boosters, the 53-meter tall rocket soared away from the French Guiana coast line after an on-time departure at 20:30:07 UTC.

With a thrust of 1,420 metric ton force, Ariane 5 quickly aligned itself with a due easterly course, passing the speed of sound 49 seconds into the flight followed by Maximum Dynamic Pressure 20 seconds later. The twin boosters dropped away from the ascending rocket at T+2 minutes and 23 seconds after each burned through 237 metric tons of propellants to help accelerate Ariane 5 to a speed of two Kilometers per second.

Continuing under the power of the 136,500-Kilogram-force Vulcain 2 engine, Ariane 5 departed the dense atmosphere and dropped the two 17-meter long fairing halves to shed no longer needed weight and reveal the Sky Muster II satellite. The core stage finished its job just shy of T+9 minutes with stage separation coming six seconds after the shutdown of the main engine.

The ESC-A upper stage quickly ignited its 6,400 Kilogram-force HM-7B engine on a burn of 16 minutes and 13 seconds to finish boosting the vehicle’s velocity to an injection speed of 9.4 Kilometers per second. VA231 aimed for an orbit of 250 by 35,786 Kilometers at an inclination of 6.0 degrees – standard for most Ariane 5 launches.

Powered flight went without a hitch and Ariane 5 entered a relatively fast ballistics sequence compared to some of the previous missions. Sky Muster II was sent on its way three minutes after Main Engine Cutoff, heading out on a mission of at least 15 years. Following the release of its first passenger, the upper stage again fired its Hydrazine-fueled thrusters to maneuver to a different orientation for the release of the Sylda adapter 31 minutes into the flight to expose the GSAT-18 spacecraft.

GSAT-18 was pushed off its payload adapter 32 and a half minutes into the mission, marking the success of Wednesday’s primary mission – the 74th consecutive success for the workhorse launcher.

With both payloads on their way, the ESC-A upper stage entered a secondary mission beginning 47 minutes into the flight.

ESC-A hosted 65 sensors in addition to its standard instrumentation to measure temperature profiles, pressure and fill level on the vehicle’s tanks plus a video camera system to capture video of the propellants in Zero-G.

The data-gathering exercise was planned to last around half an hour and included attitude maneuvers carried out by the ESC-A to study how the cryogenics behave during an extended coast phase while in an almost empty tank volume.

Data collected by the experiment will feed the development of a Propellant Management System for the Ariane 6 upper stage which will be outfitted with a 180kN Vinci engine that, unlike the HM-7B, can be re-started to support flexible mission profiles. A re-start after a coast phase will require propellant management to ensure the engine only ingests liquid propellants and no gas bubbles.

Ariane 6 is being developed for a maiden launch in 2020 and will be available it two different versions – one with a pair of Solid Rocket Boosters, the other with four and both using the same two-stage cryogenic rocket stack. Ariane 6 is expected to lower the cost for access to Geostationary Orbit quite significantly when compared to the Ariane 5 while also adding the flexibility of flying the vehicle in two different configurations.

Wednesday’s launch marked the 232nd launch of an Ariane rocket in a program that premiered in 1979, it was the 88th flight of the Ariane 5, and the 58th using the ECA configuration.