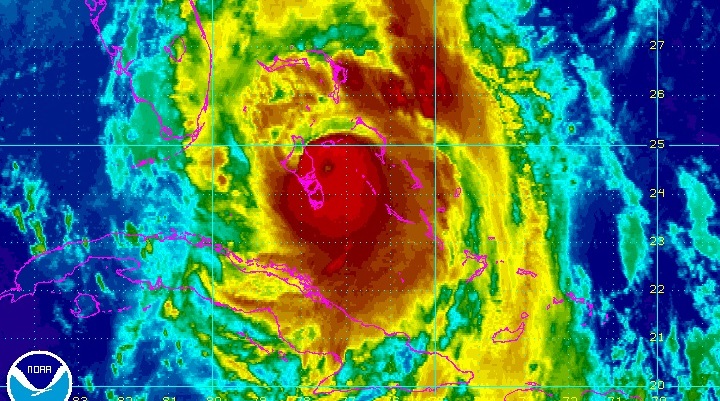 Cape Canaveral is preparing for a potentially historic hurricane impact as Matthew, growing into a major hurricane over the course of the week, is currently expected to take a path directly along Florida’s east coast Thursday night and into Friday.

1.5 million Florida residents received evacuation instructions to leave storm surge areas and Hurricane- speed winds are predicted as far north as South Carolina in what shapes up to become a particularly dangerous situation.

Please refer to the National Hurricane Center for updated information on Hurricane Matthew and its expected path: http://www.nhc.noaa.gov/#MATTHEW

We are collecting information, updates & images of Matthew’s impact on Cape Canaveral here.

On Tuesday, Matthew raged over Haiti and eastern Cuba as a Category 4 Hurricane with winds of 230km/h, causing widespread destruction and at least 65 deaths. At that point – still with plenty of uncertainty in the storm’s future path – Cape Canaveral was placed under a Hurricane Alert Status and preparations for a possible arrival began.


Under a HurCon 4 status, the 45th Space Wing initiated preparations for the arrival of surface winds of 90km/h within a 72-hour period. In response, the Air Force began disconnecting power lines to non-essential facilities and securing operational facilities for the possible arrival of the storm.

Late on Tuesday, models shifted Matthew’s expected trek to the west, showing it grazing Florida’s space coast, its center making landfall near Cocoa Beach and the Kennedy Space Center in the early hours on Friday. Cape Canaveral Hurricane Status was elevated to HurCon 2 and mandatory evacuation for personnel and residents was started.

On Wednesday, personnel secured Kennedy Space Center facilities before the center closed for operations around mid-day. The Visitor’s Center will remain closed at least until Saturday, depending on the magnitude of damage found after the storm passes.

Further south at Cape Canaveral Air Force Station, commercial launch operators United Launch Alliance and SpaceX also suspended operations with their facilities buttoned up to ride out the storm and possible storm surge up to two meters in addition to towering waves of four to six meters.

Approaching the warm and shallow waters of the Bahamas conducive to hurricane development, Matthew gained strength and intensified again to 200km/h winds. As of mid-day (UTC) on Thursday, Matthew was expected to “become an extremely dangerous category 4 hurricane while it moves over the northwestern Bahamas and approaches the east coast of Florida,” the National Hurricane Center said.

Sampling conducted around 12 UTC on Thursday confirmed the strengthening process had begun with zones of extreme wind speeds present at low altitude levels.

Mandatory evacuation orders were also given for coastal communities north of Cape Canaveral and into Georgia going into effect in the morning on Thursday.

Per the latest models, landfall remains likely over the Cape Canaveral area with maximum wind speeds of 235km/h – the current trek indicates storm motion will contribute to the sustained wind speed. A shift in the hurricane’s trek to either the west or east remains possible throughout the day on Thursday which would change the position where the most intense winds arrive on shore.

If Matthew stays on its predicted path, the impact to Cape Canaveral and NASA facilities as well as historic structures at the site may be severe. The Orbiter Processing Facilities – currently in use for Boeing’s Starliner and the Air Force’s X-37B spacecraft – are rated to withstand winds of 170km/h while the Vehicle Assembly Building, Launch Control Center and LC-39 launch facilities can withstand 200km/h. The most winds the VAB had to sustain to date came with Hurricane Frances in 2004 when 145km/h winds blew off hundreds of external panels from the building.

Launch Complex 39A that SpaceX hopes to activate for operation by November is rated for sustained winds of 185km/h, gusting to 200.

Facilities built after Hurricane Andrew (1992) were designed to be able to withstand winds of 210km/h or greater.

Currently present at Florida’s Space Coast are two satellites preparing for launch – the Air Force’s SBIRS GEO-3 that recently suffered a launch delay to January and NASA/NOAA’s GOES-R weather satellite that was being processed for launch at the Astrotech Facility in Titusville. GOES-R was buttoned up earlier in the week and when it became clear a devastating hit by Matthew was likely, the satellite was moved into a secure shelter that can handle the strongest storms.

GOES-R is scheduled for launch on November 4 from Space Launch Complex 41 atop an Atlas V rocket. Due to the delay to SBIRS (was also to use Atlas), stacking of the vehicle has not yet begun.

Per standard procedure, a Hurricane “Ride-Out Team” will be deployed to the Kennedy Space Center at 3 p.m. local time on Thursday to report the extent of damage to KSC facilities, including Complex 39, to the Emergency Operations Center.