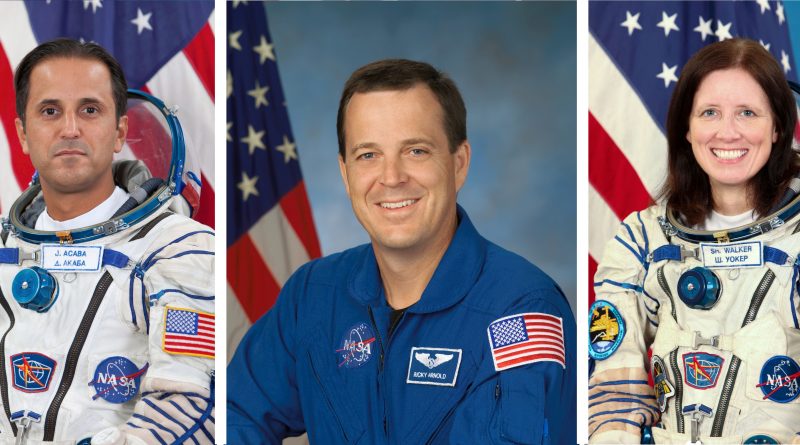 NASA selected veteran Astronauts to enter flight training operations and fill two seats on Russia’s Soyuz spacecraft to increase the U.S. Segment crew contingent from three permanent residents to four in the second half of 2017 and first half of 2018 – gaining an extra pair of hands to tackle a very busy scientific program in progress aboard the orbiting laboratory.

NASA acquired a pair of seats on the Soyuz MS-06 and MS-08 missions through Boeing after the Russian Space Agency decided to reduce its permanent ISS crew to two residents and Soyuz builder RSC Energia took advantage to offer the open seats to Boeing to settle a financial dispute over the dismantling of the Sea Launch endeavor in which both Boeing and Energia were involved. A further option exists for Soyuz seats in 2019 that could help NASA bridge a gap to Commercial Crew missions given the fading schedule margins for SpaceX and Boeing in their vehicle development and certification process.

>>Article: NASA inks Agreement with Boeing for up to five Seats on Russian Soyuz Spacecraft


With two seats opening up on relatively short notice, NASA was likely to choose crew members with prior ISS and training experience given the usual two-year preparation process would not be possible for the two flights with no more than six months for the crew member riding on the Soyuz MS-06 mission and around one year for the MS-08 flight.

NASA announced its latest crew selections for the International Space Station on Tuesday including the flights that became available through the deal with Boeing.

Joe Acaba and Shannon Walker reported for flight training in Russia on March 13 with Acaba serving as the prime crew member for Soyuz MS-06 set for launch in September and Walker acting as a backup for that mission. The slot available on Soyuz MS-08 in March will be filled by Ricky Arnold. Acaba, Walker and Arnold were selected by NASA back in 2004 and each has made at least one visit to the Space Station.


Joe Acaba first flew to space in March 2009 aboard Space Shuttle Discovery on mission STS-119 that delivered the outermost segment of the Station’s starboard truss along with the final set of solar arrays to give ISS its iconic shape and full power to head into its utilization phase. During the mission, Acaba participated in two spacewalks to complete various outfitting and maintenance tasks over a cumulative EVA time of nearly thirteen hours.

After his Shuttle flight, Acaba transitioned to training for a long-duration deployment to ISS and lifted off aboard the Soyuz TMA-04M spacecraft in May 2012 to join the ISS Expedition 31/32 crew. Acaba’s four-month mission was highlighted by the arrival of the SpaceX Dragon as the first commercial cargo delivery to the Space Station. In total, Acaba spent spent 137 days in space on his two visits to the International Space Station.

Most recently, Joe Acaba worked as the Director of Operations Russia in Star City supporting Soyuz training operations and coordinating activities between NASA and Roscosmos.

Shannon Walker, a trained physicist and Flight Controller-turned-Astronaut, has been part of the International Space Station project since the mid-1990s with particular focus on robotics integration. As part of her work, Walker spent a year in Moscow to coordinate avionics development for ISS before entering leading positions in NASA’s Engineering Office.

Walker lifted off from the Baikonur Cosmodrome in June 2010 aboard Soyuz TMA-19, embarking on what would become an extremely busy five and a half-month mission. In July, one of the Station’s critical pump modules that circulate ammonia through the thermal control system failed, requiring extensive system power-downs aboard ISS followed by three spacewalks by Doug Wheelock and Tracy Caldwell Dyson for which Walker provided robotics support and helped choreograph the activities. Shannon Walker logged a total of 163 days in space on her mission as part of ISS Expedition 24/25 and she also participated in NASA’s NEEMO-15 underwater expedition in 2011.

Ricky Arnold, a former science teacher, also made his first space mission on Space Shuttle Discovery’s STS-119 mission, together with Acaba and five other crew members. Completing a pair of EVAs, Arnold worked with Steve Swanson and Joe Acaba to integrate the S6 truss segment and support several external maintenance tasks, logging 12.5 hours of EVA time. STS-119, Arnold’s only flight to date, has a duration of 12 hours and 19 hours, circling the Earth 202 times.

Arnold participated in a pair of NEEMO underwater expeditions and led ESA’s 2016 Caves mission, exploring a large cave network in Sardinia. Most recently, he worked as the Assistant to the Chief for EVA and Robotics in the Astronaut Office

The increase of the U.S. Segment crew prior to the start of Commercial Crew operations was made possible by a decision by the Russians to reduce their permanent crew to two due to the current workload on the Russian segment that does not justify having three crew members in orbit.

Roscosmos plans to go back to three crew members once the Nauka Multipurpose Laboratory Module is ready for launch to give the Russian Segment a state-of-the-art laboratory, however, recent news indicate MLM could still be two years from launch after new problems with the propulsion system of the troubled module were discovered.

The picture is very different on the U.S. Segment where a much greater number of scientific activities are underway at any given time with a strong desire to step up to four crew members to be able to gain additional hands to support even more experiments. An additional crew member on the U.S. Segment provides a 50% increase in crew time available for ISS utilization activities since the addition of one resident only comes with a marginal increase in maintenance and upkeep of the Station’s Systems.

Russia’s crew reduction will take effect in April: Soyuz MS-02 with Sergei Ryzhikov, Andrei Borisenko and Expedition 50 commander Shane Kimbrough will land on the 10th and Soyuz MS-04 with a two-man crew of Fyodor Yurchikhin and NASA’s Jack Fischer is set for liftoff on the 20th. To avoid going down to a two-person crew on ISS in the June/July time frame, NASA is currently evaluating whether veteran Astronaut Peggy Whitson can be transferred from Soyuz MS-03 landing in early June to Soyuz MS-04 set for an early September landing, taking advantage of the empty seat on the next Soyuz. Roscosmos already approved the switch, but NASA has yet to commit to the mission extension.

The Soyuz MS-05 mission will launch in late July with Sergei Ryazansky, Randy Bresnik and Paolo Nespoli, potentially leading to four members on the USOS if Whitson can stay on ISS until the return of Soyuz MS-04 on September 3. Soyuz MS-06 is set for launch on September 13 with commander Aleksandr Misurkin, Flight Engineer Mark Vande Hei and Joe Acaba in the right seat. The Soyuz MS-07 mission is targeting launch at the end of October with Anton Shkaplerov, Scott Tingle and Norishge Kanai and will be followed by the Soyuz MS-08 launch in March 2018 with Drew Feustel, Ricky Arnold and a commander that has yet to be named.