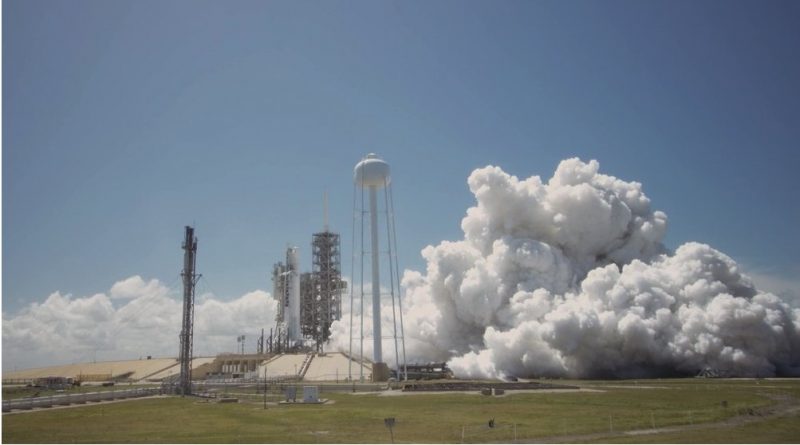 SpaceX on Monday test fired the company’s first Falcon 9 rocket that will make a repeat trip to the edge of space to dispatch a payload into orbit, marking another milestone toward regular re-use of Falcon 9 first stages to revolutionize cost-effective access to space. Monday’s all-important Static Fire Test set the stage for Falcon’s first re-use mission as early as Thursday with the SES-10 communications satellite headed to Geostationary Transfer Orbit.

SpaceX founder Elon Musk set the goal to Mars when starting SpaceX in 2002 and re-use of rockets was identified as an important intermediary target to make the colonization of Mars economically viable. Since its early days 15 years ago, SpaceX has taken a place in the history books as the first privately-funded company to send a rocket into orbit, launch, orbit and recover a spacecraft and become the first private firm to send a cargo vehicle to the Space Station. In 2011, SpaceX announced they were beginning a reusable launch system development program and this week’s launch will mark a major step in achieving operational re-use capability and add to SpaceX’s record list.


It has been a long road to reach this first re-use milestone for SpaceX after the company introduced the Falco 9 back in 2010 and carried out its initial cargo missions to the Space Station before upgrading to the more-powerful Falcon 9 v1.1 that provided the margin needed for initial recovery experimentation via propulsive returns to soft splashdown landings in the ocean to gather data on the return sequence. Concurrently, SpaceX worked through low-altitude vertical-take-off, vertical-landing tests using the Grasshopper and F9R Dev test vehicles to ensure Falcon 9 could stand its landing when returning from the edge of space.

SpaceX’s Autonomous Spaceport Drone Ship made its first appearance in 2014 to serve as a floating landing platform to be placed downrange from the launch site. The company had a bit of a learning curve over the initial drone ship landing attempts, coming close several times and producing spectacular videos of Falcon 9 boosters exploding after running into last second issues during their powered descent to the ship.


The first successful recovery of a booster came in December 2015 when SpaceX debuted the even more-powerful Falcon 9 FT version. Dispatching eleven Orbcomm satellites toward Low Earth Orbit, the first stage had enough propellant reserves to fly itself all the way back to Cape Canaveral and touch down on a flat landing pad established at Florida’s Space Coast. The first successful Drone Ship landing came in April 2016 on the Dragon SpX-8 mission and was followed by another six successful recoveries – giving SpaceX an inventory of eight flown stages the company identifies as “flight-proven” boosters.

Having established a fair success rate for its rocket landings, SpaceX began looking for a customer willing to become the first to ride on a flight-proven booster that went through a full flight cycle. Satellite Operator SES committed to the first re-flight mission in August 2016 after the company had also been part of Falcon’s first flight to Geostationary Transfer Orbit in late 2013. In return for choosing a flown booster, SES is receiving a small discount from SpaceX.

The core stage pegged to become the first to fly twice is identified by serial number #1021 and was involved in the successful launch of the Dragon SpX-8 mission on April 8, 2016. 1021’s history of active duty goes back to February 2016 when the integrated core made its first test firing at SpaceX’s McGregor facility, a standard acceptance test for all stages before they ship out to the launch site.

The assembled Falcon 9 launch vehicle, known as F9-023, fired up again on April 5, 2016 for the standard pre-launch Static Fire Test that serves as the last full checkout of the rocket and ground systems prior to launch day. Three days later, the nine Merlin 1D engines at the base of the rocket fired up again and lifted Falcon 9 off the ground to send SpaceX’s eighth operational Dragon mission on its way to the Space Station.

The core fired for 150 seconds, sending the second stage on its way to reach a Low Earth Orbit while keeping a sufficient reserve of propellant for a three-burn landing profile to home in on the Autonomous Spaceport Drone Ship. Over the course of a six-minute return sequence, the core stage was tasked with slowing down from over five times the speed of sound and aim for the precise location the drone ship was programmed to hold using its large azimuth thrusters.

Interestingly, SpX-8 had sufficient propellant reserves for a land-based recovery, however, SpaceX opted to go for a high-margin drone ship landing to prove that Falcon’s sea-based recovery was possible after a string of failures in low-margin missions had showcased the difficulties involved in sticking a landing on the floating platform.

Separating from the second stage, the booster quickly flipped around and fired three of its engines for a partial boostback maneuver followed by a brief coast outside the atmosphere to set up for another braking maneuver at the point of re-entry. The booster’s four grid fins were in action for a minute of atmospheric descent with the center engine re-igniting half a minute before the rocket gently set itself down on its four fold-out landing legs, marking SpaceX’s first recovery at sea. Secured to the drone ship’s deck, the 47-meter tall booster made a triumphant return to Port Canaveral four days later.

After its impressive return from space, 1021 went into storage at the Launch Complex 39A Horizontal Integration Facility where the booster went through detailed inspections to ensure it was fit for the rigors of another trip. Its preparation for re-flight was assisted by the 1022 booster that returned in much rougher condition after a high-energy GTO mission and was picked as the life-leader of the Falcon 9 fleet, meaning it would go through a series of full-duration fire tests to validate the various components of the rocket could go through multiple flight cycles even after returning under what was characterized as maximum stress.

According to SpaceX, four months of work were required to refurbish Core #1021 for re-flight, but the company was tight-lipped about what was required to re-fit the rocket for its second flight. 1021 re-appeared at McGregor in January of this year and underwent a standard acceptance test late that month, going through a full-duration fire test before shipping to Cape Canaveral’s LC-39A HIF to meet its second stage, a brand-new upper stage as SpaceX is currently not pursuing re-use of the second stage.

SpaceX ultimately aims to cut refurbishment requirements to only a few days or hours after introducing the Falcon 9 Block 5 vehicle later this year which will incorporate a slight performance improvement plus modifications based on lessons learned from recovered boosters, reinforcing the cores to better deal with the environments seen during return.

Looking ahead at the SES-10 mission, SpaceX will aim for another propulsive return of Core #1021 after sending the satellite on its way to orbit. The ‘Of Course I Still Love You’ Drone Ship and its support vessel were seen leaving Port Canaveral over the weekend to reach their intended position some 650 Kilometers from the launch site. Getting the booster back a second time would not only mark a massive engineering feat but also give SpaceX invaluable data on how Falcon 9 cores fare during multiple flight cycles vs. having to rely purely on ground tests.

The SES-10 Static Fire Test was originally planned to occur on Sunday ahead of a March 29 liftoff, but the turnaround of LC-39A support hardware and assembly of Falcon 9 after the successful launch of EchoStar 23 on March 16 proved out just a bit too tight. SpaceX delayed the firing from Sunday evening to Monday morning, local time, and Falcon 9 rolled out in the pre-dawn hours to reach its vertical launch position in anticipation of a 70-minute propellant loading operation to transfer over 500 metric tons of sub-cooled Liquid Oxygen and chilled Rocket Propellant 1 to the two-stage rocket.

The Static Fire Test has been a part of every SpaceX launch campaign and serves as an end-to-end test of the integrated launch vehicle and its ground support system to uncover any issues prior to launch day. The test puts the Falcon 9 through an abbreviated countdown, starting with a series of checkouts before a full tanking sequence, also involving the second stage that is not a direct part of the engine test.

The day’s test culminated in a fast-paced sequence of events checked off in the last seven countdown minutes to prepare for the brief ignition of Falcon’s nine Merlin 1D engines. Flames erupted from the base of the rocket at 18 UTC as all engines throttled up to a collective thrust of nearly 700 metric-ton-force to capture performance data. Following completion of launch vehicle safing, engineers verified the burn reached its planned duration and acceptable data was collected before putting Falcon 9 through de-tanking to head back into the HIF for the integration of the payload in the next two days.

A more thorough review of Static Fire data will feed into the Launch Readiness Review that will provide clearance to move Falcon 9 back to the launch pad in readiness for a two-and-a-half-hour launch window opening at 22 UTC on Thursday, March 30. Weather forecasters are predicting 70% odds of favorable conditions for the day’s window.