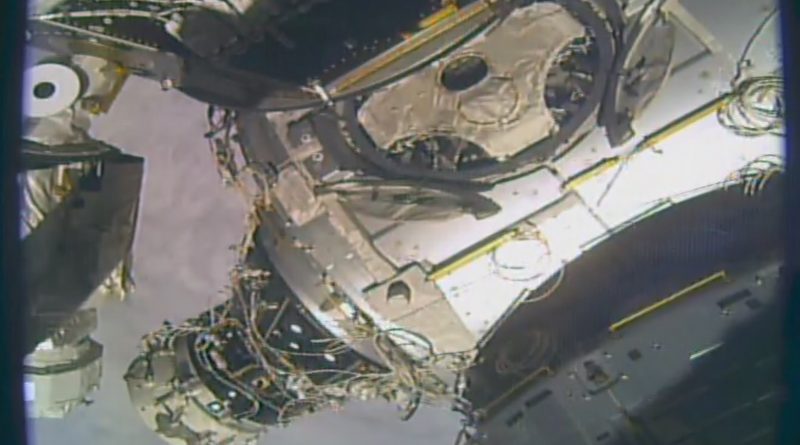 The International Space Station’s robotic arm was in action on Sunday, grasping onto a docking module and moving it to the space-facing side of the complex where it will serve as a second docking target for Commercial Crew vehicles expected to start arriving at the orbiting laboratory next year for regular crew exchange missions.

Robotics specialists were in charge of controlling the Station’s 18-meter long Canadarm2 to remove Pressurized Mating Adapter 3 from its spot on the Port side of the Tranquility (Node 3) module and carefully maneuvering it into position on the Zenith port of the Harmony (Node 2) module where it was then bolted down. Initial outfitting of the module in its new location will be performed on Thursday by spacewalkers Shane Kimbrough and Peggy Whitson before PMA-3 receives its International Docking Adapter early next year to fully commission it as a docking port for the SpaceX Dragon and Boeing’s Starliner spacecraft.


The Space Station has undergone a number of changes and upgrades to transition the complex from a configuration optimized for the Space Shuttle to a configuration where two docking ports would be available for crew vehicles and two berthing ports could be used by cargo ships.

This reconfiguration work picked up with the 2015 relocation of the Permanent Multipurpose Module to a spot on Node 3 Forward, freeing up a berthing port on Unity Nadir, permitting two cargo craft to be present at ISS at any time. Further work in 2015/16 deployed and tested the Common Communications for Visiting Vehicle System (C2V2) needed for Dragon and Starliner to communicate with ISS for the exchange of navigation data during approach.

Heading into 2017, open tasks included the full integration of the C2V2 system and the relocation of Pressurized Mating Adapter-3 to give ISS two usable docking ports on the U.S. Segment. Both of these tasks are being completed over the course of three EVAs and Sunday’s robotic activity.


PMA-3 was delivered to ISS in 2000 as the third of three Pressurized Mating Adapters taking up residence at ISS, the first two having been delivered by the very first ISS construction flight by the Space Shuttle, attached to either end of the Unity module to allow it to be mated with the Zarya module on one end and provide a docking port for the Shuttle on the other. PMA-2 eventually ended up on the forward end of the Harmony module where it became the primary docking target for the Shuttle.

PMA-3 spent its initial tenure at the Earth-facing side of the Unity module where it welcomed a pair of Space Shuttle missions in 2000 and 2001, the only Shuttle flights to utilize PMA-3 as a docking port. Over the years, PMA-3 was relocated multiple times – first to Unity port in 2001, then back to Unity nadir in 2007, back to port in 2009 and to Harmony Zenith in January 2010 to make room for the Tranquility Node Module. After Tranquility was activated, PMA-3 took its current spot on the Port Common Berthing Mechanism because Harmony Zenith was considered a backup berthing port for cargo spacecraft.

The PMA’s are cone-shaped and weigh between 1.2 (PMA-3) and 1.6 metric tons (PMA-1), measuring 1.86 meters in length and 1.9 meters in diameter at the wide and and 1.37m in diameter and the narrow end. On one end, the PMAs host a passive Common Berthing Mechanism 1.3 meters in diameter while the other end hosts an 0.7-meter APAS docking mechanism (Androgynous Peripheral Attachment System) compatible with the Space Shuttle and the Russian Zarya module.

To enable the PMAs to welcome Commercial Crew vehicles, they are outfitted with International Docking Adapters that convert the APAS docking port to the International Docking Standard utilized by Dragon, Starliner and NASA’s Orion spacecraft. This standard is freely available to any interested party and could enable ISS and future spacecraft to be compatible with a variety of international craft.

Having enjoyed a mostly dormant stay over the last decade, PMA-3 served as closet space for rarely used hardware items with the crew opening up the module only a few times a year to access stowed equipment and inspect the interior of the module.

With the desire to establish a pair of docking ports for Commercial Crew, relocation plans for PMA-3 entered the evaluation phase in 2010 with the relocation initially planned in 2015, however, the loss of the first International Docking Adapter in the Dragon SpX-7 launch failure slowed the Station’s conversion process for commercial crew.

The second International Docking Adapter (IDA) launched in July 2016 aboard the Dragon SpX-9 mission and was installed and outfitted as part of a series of EVAs the following August. IDA-3, built from spare parts to replace the lost IDA-1, is currently aiming for liftoff late this year or early next year to be attached to PMA-3 to provide ISS with a second operational docking location.

Preparations for the PMA-3 relocation started on March 3 with internal work completed by the ISS crew, removing storage items from the module, completing some outfitting of the Node 3 port location for potential future users, and installing a protective cover in the hatchway followed by four Controller Panel Assemblies needed for the unbolting of the PMA.

Robotics work picked up around 16 UTC on Sunday with Canadarm2 based on the Mobile Base System and set for a series of intricate steps under close supervision by controllers in Houston and Saint-Hubert, Canada. While operations were starting out, Mission Control also asked the crew in orbit to verify PMA-3 was properly vented to begin its relocation.

The first step of the day was a maneuver by the arm to a hover position over the Node 2 Zenith Common Berthing Mechanism to document the opening of the CBM petals in preparation for PMA’s arrival. Canadarm2 was then commanded to move over to PMA-3 and went in for the grapple of the module’s Flight Releasable Attachment Fixture at around 18:12 UTC. With the arm firmly grasping the module, the way was clear to release four sets of four bolts and open capture latches to unberth PMA-3 from Node 3 Port (~18:39 UTC).

With the arm in full control of the module, the first step was to pull PMA clear of the CBM followed by a lateral move away from the module, dealing with relatively tight clearances in the initial portion of the day’s operation. Speed on the arm noticeably increased once PMA-3 was clear and by 20 UTC, PMA-3 was already hovering above its new home, ready for the final push toward N2 Zenith. ROBO controllers used the Centerline Berthing Camera System installed in the Node 2 hatch to precisely position the module for capture latches to be closed.

Once Stage 1 capture was confirmed, the arm was switched to limp-mode that allows some wiggle room for the module when being pulled in by the CBM bolts. Mission Control radioed up to the crew at 21:21 UTC that berthing was formally completed with PMA-3 secured in what is expected to be its final location. Final bolt loading was then initiated by Mission Control and internal outfitting will be completed as the crew’s schedule allows to enable PMA-3 to become closet space again until it will be needed as a docking port.

External outfitting of PMA-3 in its new location will be completed during U.S. EVA-41, to be performed on Thursday by veteran spacewalkers Shane Kimbrough and Peggy Whitson.

As part of the EVA, Whitson will hook up a pair of cables to power the module’s heaters so that it can be repressurized for access by the crew. These cables, plus those needed for the docking adapter, were pre-staged over a series of recent spacewalks in 2015/16. Whitson will also remove the protective cover that was placed over the APAS end of PMA-3 to preserve it while not being used.

The second major task of EVA-41 will be the installation of four axial shields on the Node 3 Port CBM where PMA-3 was removed from.

The Station’s axial ports lack CBM petals, leaving a portion of the hatch and CBM exposed when no vehicle is present. Since the Node 3 Port location will not be utilized for an extended period of time, there is a desire to put in place protection against micrometeoroid and debris strikes to ensure the port will be ready for future use, currently planned with the NanoRacks Commercial Airlock that is working toward a 2019 launch.

Another task of EVA-41 is the installation of shielding around the base of PMA-3. When the PMA occupies a radial port, areas around its CBM end are potentially exposed to the MMOD environment and need additional shielding to ensure the pressure-tight CBM seal can remain intact.