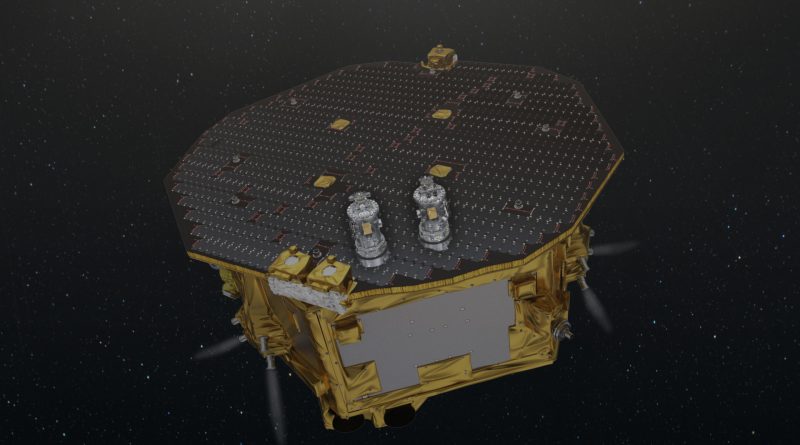 As Europe’s LISA Pathfinder mission approaches the end of its highly successful technology demonstration mission, scientists found a creative way of re-purposing the ultra-stable spacecraft platform as a cosmic dust detector, using the craft’s sensitive measurement equipment and precise thrusters to detect microscopic particles that strike the faraway spacecraft to reveal previously unknown details about the population of dust grains far from Earth.

The LISA Pathfinder Mission blasted off in December 2015 atop a Vega rocket and spiraled up from a Low Earth Orbit to a transfer toward its distant operating location, the Sun-Earth Lagrange Point 1, located 1.5 million Kilometers from Earth in the direction of the sun where the gravitational fields of the two bodies offset and provide a stable point in space.


The primary goal of the $630 million mission was to put the technology needed to detect gravitational waves to the test in an operational environment. The operational LISA mission, targeting launch around 2030, would deploy three spacecraft into a precise formation at a distance of over one million Kilometers to detect passing gravitational waves, small ripples in space-time caused by super-massive phenomena in the Universe like two interacting black holes.

Retiring any technical risks prior to the tremendous financial investment in LISA was the primary goal of the pathfinder mission.

Hidden inside the LISA Pathfinder’s body are two gold-platinum cubes that act as test masses which are to be kept in a perfect free-fall environment, only influenced by gravitation – requiring the spacecraft to compensate for any external influence however minuscule it might be.


This is accomplished by precisely measuring the relative motion of the spacecraft around the test masses and firing microthrusters to cancel out any non-gravitational influence at extremely high precision. The other goal of the demonstration was to show a laser-based interferometer would be able to track the distance between the test masses at an accuracy of a few picometers.

In the first half of 2016, LISA Pathfinder demonstrated drag-free-flight through the use of the LISA Technology Package with the two test masses & measuring equipment and a Cold Gas Micropropulsion System before handing over to the Disturbance Reduction System provided by NASA which made use of Colloid Micro-Newton Thrusters to evaluate a second thruster option for the operational mission.

The incredible stability of the LISA Pathfinder spacecraft prompted scientists to look into the possibility of using readings from the craft to assess dust impacts which are among the influences the spacecraft is designed to compensate for. This is of interest to scientists because not much data exists for the interplanetary dust population as all previous measurements were taken with orbital platforms close to Earth. Scientists suspect the smallest and slowest particles to be enriched in Earth’s vicinity and results from orbital platforms are not representative of the interplanetary dust environment in the Solar System created by asteroids and comets.

The majority of knowledge of space dust comes from NASA’s Long Duration Exposure Facility (LDEF) that spent close to six years in Low Earth Orbit, deployed by Space Shuttle Challenger in 1984 and retrieved by Columbia in January 1990. LDEF hosted over 50 technology and exposure experiments in various areas including the distribution of dust near Earth and its effect on different materials and coatings.


Knowledge on the composition of interplanetary dust in terms of grain sizes and velocities will help scientists in a variety of areas such as the physics of planet formation through dust accretion and engineering aspects for future crewed and robotic missions that will need adequate protection from collisions with fast-traveling dust grains. Even at a mass of a few micrograms, a grain of dust hitting a spacecraft at a speed of 36,000 Kilometers per hour or more can pack quite a punch and harm a spacecraft’s structure.

The hypothesis of a NASA team of scientists was that data from LISA Pathfinder’s accelerometers and thrusters could be used to identify individual dust impacts. As a grain hits the spacecraft, it transfers momentum that has to be countered by the micronewton thrusters on the spacecraft and, from the thrust component and direction, teams believed they could calculate the properties of dust grains – essentially turning telemetry data not considered in a scientific sense into a valuable measurement.

“We’ve shown we have a novel technique and that it works,” said Ira Thorpe, who leads the team at NASA’s Goddard Space Flight Center. “The next step is to carefully apply this technique to our whole data set and interpret the results.”

The algorithm employed to decipher thruster actions on the spacecraft to dust properties has a high-degree of complexity as it works backwards – simulating millions of different scenarios that describe a dust impact for comparison to what the spacecraft’s actual action was. A similar algorithm is utilized by the Laser Interferometer Gravitational-wave Observatory (LIGO) that made the first definitive detection of a gravitational wave, announced in February 2016.

“The way it works is that we come up with a guess of what the signal might look like, then study how LIGO or LISA Pathfinder would react if this guess were true,” Tyson Littenberg of NASA’s Marshall Spaceflight Center explained. “For LIGO, we’re guessing about the waveform, the peaks and valleys of the gravitational wave. For LISA Pathfinder, we’re guessing about an impact.”

Microscopic dust is present throughout the Solar System, originating in the dusty tail of comets and asteroids as they orbit the sun, producing streams of dust into different directions at various speeds. Within the gravitational pull of large bodies like Earth, the dust environment is significantly different from interplanetary space due to a process called gravitational focusing which causes Earth’s neighborhood to be enriched in smaller and slower particles. Scientists expect the overall flux of micrometeoroids at the L1 location to be much smaller than near Earth while the ratio of faster to slower particles increases.

Scientists hope data delivered by LISA Pathfinder can allow them to identify individual debris streams that could be traced to specific asteroids and comets.

At present, the LISA Pathfinder is in its extended mission phase that will wrap up in the coming months and is largely dedicated to gaining additional knowledge that will help inform the design of the future LISA mission. In early 2017, LISA Pathfinder spent three weeks running an uninterrupted experiment to allow scientists to explore the instrument’s behavior in the lower frequencies that are of interest for the detection of gravitational waves. This required the spacecraft to suspend stationkeeping maneuvers for three weeks, beginning a slow drift out of its Lissajous orbit around the L1 Libration Point.

In recent weeks, LISA Pathfinder completed a departure of L1 to enter a heliocentric orbit around the sun which will ultimately become the spacecraft’s graveyard orbit, but not before even longer uninterrupted testing periods to study further noise sources in the low-frequency range.

Additionally, teams were curious to explore the effect of gas molecules present in the two test mass enclosures which has been showing a gradual reduction over the course of the mission as more and more molecules were vented into space. To gather more data, teams planned to switch off most of the spacecraft heaters to reduce the pressure inside the chambers and examine whether this can be a viable option for reducing noise.

A design for the operational LISA mission is expected to be selected in the summer of 2017; ESA will be leading the mission with contributions of NASA. Extending the distance between the free-falling test masses to millions of Kilometers while maintaining the ultra-precise measurement accuracy will allow LISA to capture the low-frequency signatures of gravitational waves, propagating through space at the speed of light.

Depending on the funding situation, LISA is planned to go through an additional three years of technology readiness assessments before pushing into mission development and spacecraft production with launch expected in the first half of the 2030s.