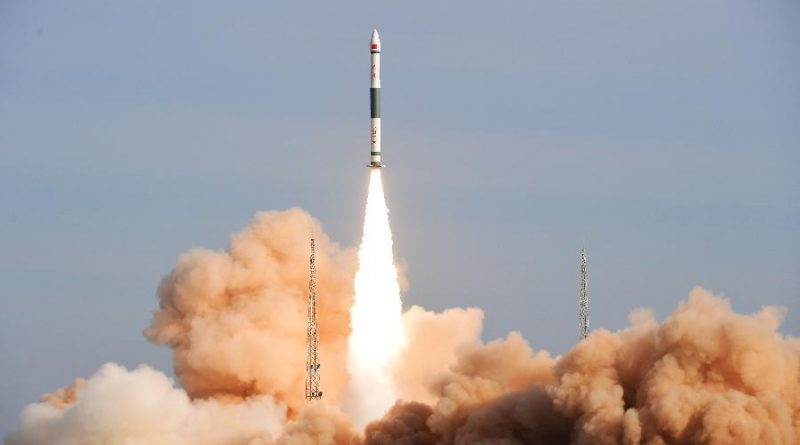 China’s Kuaizhou-1A “Speedy Vessel” conducted its first commercial launch on Monday, lifting off from the Jiuquan Satellite Launch Center in the Gobi Desert at 4:11 UTC with a high-resolution video satellite and a pair of small CubeSats as payloads.

Confirmation of launch success was provided by Chinese officials and the satellites were detected in an orbit over 500 Kilometers in altitude.

Kuaizhou is a quick-response launch system developed by the China Aerospace Science and Industry Cooperation based on ballistic missile technology to create a rocket that can be launched on short notice to deploy imaging satellites for event monitoring. The first two missions of the rocket, flown by the Kuaizhou-1 variation in 2013 and 2014, orbited Kuaizhou imaging satellites which operated in exceptionally low orbits to generate very high-resolution imagery.


The Kuaizhou-1 launch vehicle makes use of three solid-fueled stages and a fourth, liquid-fueled stage that is integrated with the spacecraft and does not separate after launch – reducing overall mass by integrating the attitude determination & control, power, telemetry, control and propulsion systems of an upper stage and satellite into a single unit.

Kuaizhou-1A uses the same three-stage stack plus liquid-fueled upper stage, but allows for separable payloads to create a vehicle suited for a large number of satellites. KZ-1 can deliver payloads of up to 400kg into a Sun Synchronous Orbit while KZ-1A can lift around 225kg into a 500km SSO.

EXPACE is the commercial operator of the Kuaizhou-1/1A and KZ-11 launch systems, offering the vehicles on the domestic Chinese market and the international launch market. KZ-11 is a larger launch vehicle, capable of lifting one metric ton into a sun synchronous orbit at a competitive launch price of $10,000 per Kilogram.

Aboard the first commercial mission of Kuaizhou-1A was the Jilin Linye-1 video satellite, and the Xingyun Shiyan-1 and Caton-1 CubeSats.

Jilin Linye-1 is the third Jilin video satellite to be launched into orbit in a project that is largely funded by the Jilin province to accelerate the development of a local satellite production capability to be able to establish a constellation of small satellites for the regular collection of Earth imagery. Also involved in the project are the China Academy of Sciences, the Harbin Institute of Technology and a number of contractors delivering satellite components.

The 165-Kilogram Jilin-1 (03) satellite is primarily dedicated to forestry and land resource monitoring, capable of capturing high-resolution video across a 11.5-Kilometer ground swath at a resolution exceeding 1.0 meters. According to state media, the satellite will also be employed for environmental protection, transport and disaster prevention and relief purposes.

The Jilin small satellite project is far more ambitious, having outlined the goal of operating over 60 satellites in orbit by 2020 to be able to capture views of any point on Earth every 30 minutes. Several satellites are expected to head into orbit in 2017 to be followed by an ever increasing number each year aiming to operate 138 satellites in 2030 which would provide a capability of imaging any given point on the planet every 10 minutes – a goal that surpasses all western Small-Sat Earth observation companies.

Xingyun Shiyan-1 is a CubeSat developed by the CASIC 9th Academy to complete a demonstration of narrow-band communication downlink from Low Earth Orbit. Caton-2, a 2U CubeSat, was developed by Beijing Caton Universal Technology Ltd. and is tasked with a demonstration of a VHF Data Exchange System (VDES) which is based on the Automatic Identification System for maritime monitoring. VDES aims to maintain the basic functions of the current AIS but enhance its data rates by a factor of 32 to deliver a wealth of additional information to ship pilots not provided by AIS such as tidal information and other messages relevant to safe navigation through the world’s oceans.

Monday’s launch took place at 4:11:12 UTC and four objects were cataloged in orbit: three payloads in a 531 by 545-Kilometer orbit at an inclination of 97.54 degrees, and the upper stage which performed an altitude-reduction maneuver and ended up in an orbit of 252 by 531 Kilometers.

The Kuaizhou-1A launch vehicle stands 20 meters tall and has a launch mass of 30 metric tons, comprising three solid-fueled stages and a Liquid Booster Control Segment that acts as upper stage to finish the orbital insertion. KZ-1/1A are based on the mobile-launched DF-21 missile by adding two additional upper stage to create a highly precise but low-cost orbital launch vehicle with quick-launch readiness support when needed.

Per the typical launch profile into a Sun Synchronous Orbit, the first three stages are fired in relatively quick succession followed by a lengthy propulsive phase of the liquid-fueled fourth stage to circularize the orbit at the desired parameters.

The first stage separates 83 seconds into the flight at an altitude of around 36 Kilometers followed by the burn of the second stage and its separation 161 seconds after launch when the stack will have crossed the 100-Kilometer mark. Next is a brief coast of around thirty seconds to third stage ignition during which the payload fairing is jettisoned. KZ-1A supports two fairing sizes, 1.2 and 1.4 meters in diameter to facilitate payloads of different sizes. The third stage separates 284 seconds into the mission when residual thrust on its solid rocket motor will have tailed off.

The fourth stage, consuming Nitrogen Tetroxide and Monomethylhydrazine propellants, can fire for up to 13 minutes at a relatively low thrust to finish the insertion into the desired orbit. It is also responsible for providing attitude control during second and third stage flight; three-axis control during first stage operation is provided by actuated grid rudders. The typical ascent phase from liftoff to spacecraft separation takes between 15 and 20 minutes.

Due to its mobile launch architecture, KZ-1A can be operated from all Chinese spaceports. It employs a Mobile Launch Platform that transports the rocket from the integration facility to the launch site and provides power and thermal control to the payload and launcher as well as connectivity for prelaunch testing.