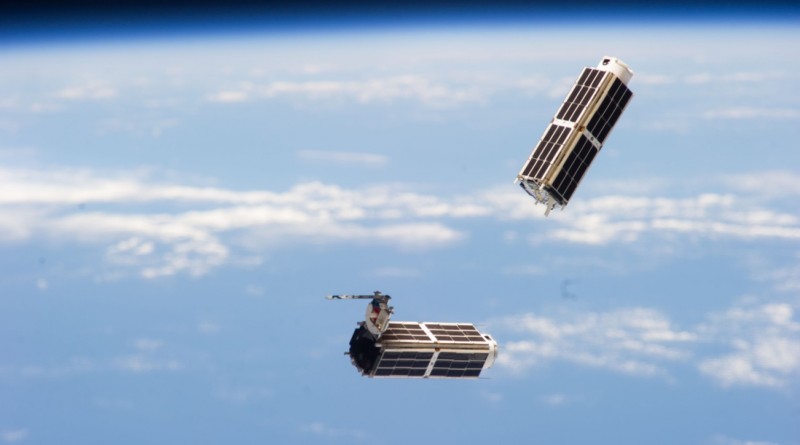 The deployment of CubeSats from the International Space Station resumed this week after an extended hold due to the Dragon SpX-6 launch failure in June that prevented a number of small satellites from reaching their orbital destination. Deployments were started on Monday with a pair of Danish satellites and continued with Planet Labs Dove satellites that are part of the company’s ‘Flock’ of Earth Imaging satellites. A total of 16 satellites are part of this round of deployments, to be completed on Wednesday.

The first launch of CubeSats from the Space Station occurred in 2012 after the advantages of launching small satellites from the orbiting laboratory was discovered in the years ahead. Flying satellites to the Space Station and deploying them robotically allows them to be launched in safe packaging and checkouts prior to deployment are possible as well, guaranteeing that the satellites would not suffer any launch-related damage. The initial launches of CubeSats from ISS used a smaller Japanese Deployment System before NanoRacks finished development of its CubeSat Deployer known as NRCSD (NanoRacks CubeSat Deployer).

The first use of this deployment mechanism came in February 2014 when the first 28 Flock-1 satellites were sent on their way. NRCSD combines eight deployers, each capable of holding six CubeSat Units. Each of the eight deployers can be commanded individually for the release of any combination of satellites amounting to 6U, e.g. two 3U satellites, three 2U satellites, six 1U satellites or a combination between different sizes.


Launched aboard the HTV-5 cargo spacecraft was the sixth NanoRacks CubeSat Deployer holding 16 satellites – 14 Planet Labs Doves, AAUSat-5 and GOMX-3. The Deployer was installed on the Multi-Purpose Experiment Platform (MPEP) on October 1 with the MPEP already attached to the Slide Table of the Japanese Experiment Module’s airlock that provides sufficient space for the transfer of small-sized payloads to the exterior of ISS and back.

Depressurization of the airlock was completed on Friday after a minor workaround on the multilayer insulation of the deployer and the extension of the slide table was completed over the weekend, allowing the Japanese Remote Manipulator System to grapple the MPEP that was then released from the Slide Table. JRMS was moved to the proper orientation to point the business end of the deployer to a direction that was carefully worked out to send the satellites into independent orbital trajectories, not coming in the way of ISS on any subsequent orbit.

The first two satellites released as part of this round of NanoRacks satellite deployments were AAUSat-5 of Aalborg University and GOMX-3 for GomSpace – ejected from the deployer at 14:05 UTC on Monday. AAUSat-5 is a student-built 1U CubeSat outfitted with an Automatic Identification System receiver that can record signals sent from maritime traffic to help study the use of CubeSats for the tracking of ships via AIS signals that contain a vessel’s identification, position, course and speed information that is normally transmitted to ground stations on-shore. The use of satellites for AIS reception allows for the monitoring of much larger areas than possible with ground-based systems that only provide coverage to a few dozen Kilometers away from land.

GOMX-3 hosts a radio system capable of receiving signals sent by the Automatic Dependent Surveillance – Broadcast system of commercial aircraft containing information on the aircraft ID, its position, altitude and intent. The reception of the ADS-B signals from space is still in the evaluation phase as the system was set up to only operate on short ranges of 80 Nautical Miles and not transmit into orbit. Though first test missions have shown that satellites can pick up these signals which would allow for improvements to be made in aircraft monitoring over areas where ground based radars are far apart or non-existent. Proposals exist for the use of ADS-B terminals in space for use in statistical applications or launching a large number of such spacecraft for real-time ADS-B coverage to ultimately take over from the more expensive radar systems.

With the two European Satellites on their way, all remaining satellites were Planet Labs Doves, 3U CubeSats carrying Earth imaging payloads to support a constellation of small satellites capable of collecting high-resolution imagery offered by the company to commercial customers.

With the Flock 2b satellites taking up the size of three CubeSat units, each deployer of the NRCSD can hold two Doves that are therefore released two at a time. Pairs of Doves were sent on their way at 01:15:02, 04:30, 8:31:35, and 11:45 UTC on Tuesday and 0:10 UTC on Wednesday. The remaining pairs of satellites were set for release on Wednesday to complete this round of satellite deployments.

The next set of CubeSats is set for liftoff to the International Space Station on the Cygnus Orb-4 mission, an interim flight of Cygnus using the Atlas V launch vehicle to bridge the gap created by re-fitting of the Antares rocket with new engines in response to last October’s Orb-3 launch failure.