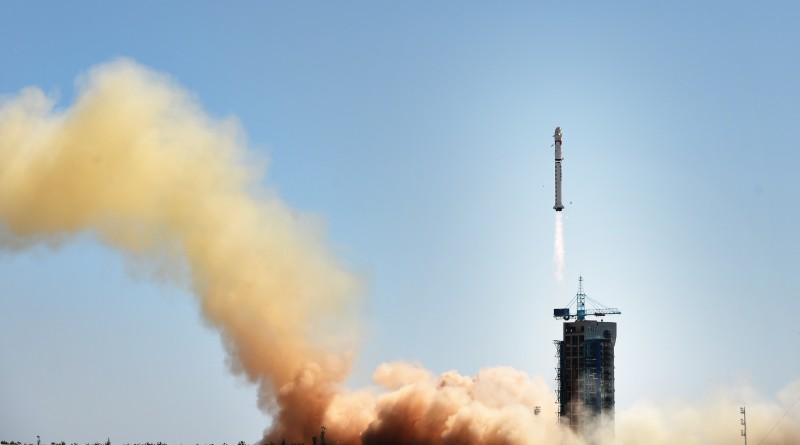 A Chinese Long March 2D lifted off from the Jiuquan Satellite Launch Center at 4:13 UTC on Wednesday, carrying into orbit a group of commercial Earth Observation Satellites. The next in a string of launches lined up for the closing months of 2015, this mission involves four satellites flying under the Jilin-1 designation, marking the first launch in a planned constellation of satellites to include a large number of small Earth Observation spacecraft.

Departing Jiuquan to the south-south-west, Long March 2D was setting out to deliver the satellites to a Sun Synchronous Orbit 656 Kilometers in altitude. Launch success was confirmed by official Chinese Media around one hour after liftoff.

Jilin-1 Optical Sat A is a commercial Chinese remote sensing satellite capable of collecting multi-band high-resolution Earth imagery. Much of the funding for the satellite was provided by the Jilin province to accelerate the development of a local satellite production capability to be able to establish a constellation of small satellites for the regular collection of Earth imagery. Also involved in the project are the China Academy of Sciences, the Harbin Institute of Technology and a number of contractors delivering satellite components.


The main satellite of this launch has a mass of 420 to 450 Kilograms and is based on a hexagonal small satellite bus equipped with three fixed solar arrays for power generation, a pair of star trackers and other sensors for attitude determination and a reaction wheel system for precise attitude control. Structurally, the satellite consists of a central tube and two decks that hold the various subsystem components.

The Jilin-1 Optical Satellite A is outfitted with a panchromatic imaging system achieving a ground resolution of up to 0.72 meters and a multi-spectral camera for full-color and infrared imaging at a four-meter resolution. The satellite covers a swath width of over 11.6 Kilometers and can support off-nadir imaging at up to +/-45 degrees. Slews from +30 to -30° take under 120 seconds to allow for agile imaging operations of a number of locations along the satellite’s ground track and to permit stereo imaging.

The 40 by 40 by 60-centimeter Jilin-1 Technical Verification Satellite weighs in at around 55 Kilograms and hosts an experimental Earth Observation System set to undergo testing in an operational space environment for the improvement of future small EO satellite designs as China follows a trend of smaller and smaller remote sensing satellites that permit the creation of large constellations of satellites to collect a wealth of images of Earth’s surface on any given day. Powered by a body-mounted solar array delivering 35 Watts of power, LQSat has a ground resolution of approximately five meters. The satellite is also capable of agile imaging, stereo imaging and video collection, covering a ground swath of 10 Kilometers.

The two Jilin-1 Video Satellites are identical remote sensing satellites outfitted with video imaging systems for the acquisition of high definition video of targets on the ground as the satellites pass over. Each of the two satellites weighs around 95 Kilograms and measures 1.2 by 1.1 meters in size, equipped with a camera system capable of achieving a ground resolution of 1.13 meters, covering a frame of 4.3 by 2.4 Kilometers.

The Jilin small satellite project is far more ambitious than launching four satellites into orbit, having outlined the goal of operating over 60 satellites in orbit by 2020 to be able to capture views of any point on Earth every 30 minutes. 12 satellites are expected to head into orbit in 2016 to be followed by an ever increasing number each year aiming to operate 138 satellites in 2030 which would provide a capability of imaging any given point on the planet every 10 minutes – a goal that surpasses all western Small-Sat Earth observation companies.