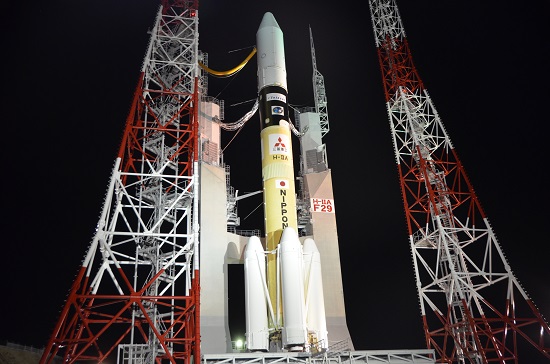 Japan’s H-IIA rocket was rolled out to its sea-side launch pad at the Tanegashima Space Center Monday night to get ready for liftoff on Tuesday on a semi-secretive mission, lifting a military communications satellite into orbit.

With the DSN-2 X-Band Satellite securely tucked away under the rocket’s payload fairing, H-IIA aims for liftoff at 7:44 UTC on Tuesday, the opening of a 74-minute launch window.

Given the military nature of the mission, specifics on the satellite and the launch profile are kept under wraps by Japanese officials. There will be no official broadcast of the launch, but video of the liftoff will be available through amateur webcasting groups.

Blasting off from Tanegashima, the rocket will be headed to the south-east to take the standard route toward Geostationary Transfer Orbit, firing its boosters and first stage followed by an initial firing of the second stage to reach a preliminary Parking Orbit. The rocket’s second stage will fire once more to inject the satellite into a standard GTO around 28 minutes after launch.


The Japanese Government contracted DSN Corporation in January 2013 to provide an upgraded space segment for the country’s military X-Band network, plus ground systems upgrades and operation of the system into the 2030s. Under the framework of a Private Finance Initiative, DSN agreed to use private funds, management and technical capabilities to establish and operate the project – incurring the initial capital investment before driving in annual revenue from the government for the years the system is operational.

DSN Corporation is comprised of satellite communications provider SKY Perfect JSAT which is the majority owner of DSN and responsible for project management and procurement & operation of the Space Segment. Technology company NEC and telecommunications provider NTT each hold 17.5% of shares and are responsible for ground segment upgrades & maintenance as well as technical assistance. Maeda Corporation, a civil engineering contractor, acts as a partner and built the new ground station infrastructure.

The DSN space segment will consist of a dedicated satellite – DSN-2, launching on Tuesday, and a hosted payload – DSN-1, part of the Superbird 8 communications satellite. DSN-1 was expected to launch in 2016, but the Superbird 8 satellite suffered heavy damage when an overpressurization even occurred during shipping to the launch site, setting the project back by around two years.

DSN-2 is based on Mitsubishi Electric’s DS-2000 satellite platform which has been used or a variety of communications applications and enjoys an excellent reputation for achievable on-orbit service lifetime. Details and specifications of the X-Band payload of the DSN-2 satellite are not available to the public given the military nature of the mission. The satellite will be used to connect Japanese military units on land, naval vessels and the air forces of Japan. According to press reports, DSN-2 will be stationed over the Indian Ocean from where it can cover UN contingents in South Sudan and provide services for operations against Somalian sea pirates.

Called upon for the launch of the DSN-2 satellite is the most powerful version of Japan’s H-IIA rocket, enlisting the help of four Solid Rocket Boosters to provide the kick needed to send DSN-2 on its way. Based on the type of launch vehicle in use for this mission, the mass of the DSN-2 satellite can be narrowed to around four to six metric tons, fairly typical for DS-2000 satellites.

Flying in its 204 configuration, the H-IIA workhorse consists of two cryogenic rocket stages plus four SRB-A boosters clustered around the first stage. The vehicle stands 53 meters tall, has a core diameter of four meters and weighs 443 metric tons at liftoff. It can lift up to 15 metric tons into Low Earth Orbit and six metric tons into a standard Geostationary Transfer Orbit.

Countdown operations picked up at the Tanegashima Space Center in the early hours on Tuesday with the rollout of the rocket from the Vehicle Assembly Building to Launch Pad 1, a 500-meter trip completed in a little under 30 minutes.

At the moment of booster ignition, the H-IIA rocket leaps off its pad with a total thrust of 1,034 metric-ton-force – the four boosters delivering 89% of the total thrust at liftoff. H-IIA will make a very short vertical ascent before beginning to pitch and roll in order to get aligned with its precisely planned ascent path taking the launch vehicle to the south-east for a trip across the Pacific Ocean, heading to a Low Earth Parking orbit.

The four boosters burn for just under two minutes – burnout will be sensed by the declining pressure in the combustion cambers and separation will be initiated around ten seconds after burnout using pyrotechnics and thrust struts to ensure a clean jettison. The four SRBs help accelerate the launch vehicle to over 2 Kilometers per second and separate when the vehicle is around 80 Kilometers in altitude.

Powered flight continues on the LE-7A engine of the first stage, generating a thrust of 109 metric ton-force when flying through the rarefied upper atmosphere, consuming 260 Kilograms of cryogenics each second of powered flight.

Just over three minutes into the mission, H-IIA will have reached an altitude of over 130 Kilometers, making it safe to jettison the Payload Fairing as aerodynamic forces can no longer harm the delicate spacecraft structure.

H-IIA’s first stage will burn until T+6 minutes and 40 seconds to accelerate the ascending rocket beyond 6 Kilometers per second. Eight seconds after MECO, the 37-meter long first stage will drop away to clear the way for the ignition of the cryogenic second stage. Achieving its full thrust of 13,970 Kilogram-force, the second stage will burn its LE-5B engine for around five minutes to boost the stack into a Low Earth Parking Orbit a little over 200 Kilometers in altitude.

After completion of the first propulsive phase of the mission, H-IIA will enter a coast phase of approximately 12 minutes to continue on its south-easterly path in order to fire the engine again when passing the equator so that the high-point of the orbit can be placed above the equator as well – standard practice in GTO launches. The second burn will be over three minutes in duration and set up for the separation of the DSN-2 satellite which is expected to occur around 28 minutes after liftoff, per the typical GTO mission profile for the H-IIA.

H-IIA Flight 29 in late 2015 debuted a modified second stage to support “Upgraded Geostationary Transfer Orbit” missions to boost satellites closer to their operational orbit by raising the orbit’s perigee. This requires a three-burn profile for the second stage – the first into a Low Earth Parking Orbit, the second after a short coast to increase the apogee to Geostationary Altitude over the equator and the third to increase the perigee and reduce the orbit’s inclination, performed at the apogee of the orbit after a four-hour coast.

According to a pre-flight briefing, Tuesday’s mission will follow a more-conventional two-burn profile, however, details on the exact timing of mission events and the target orbit were not provided.

The outcome of Tuesday’s mission will be confirmed at a press conference held around two hours after launch. Orbital data for the satellite will not be available through official channels, though satellite trackers will likely identify the spacecraft and keep tabs on where it will settle in Geostationary Orbit.