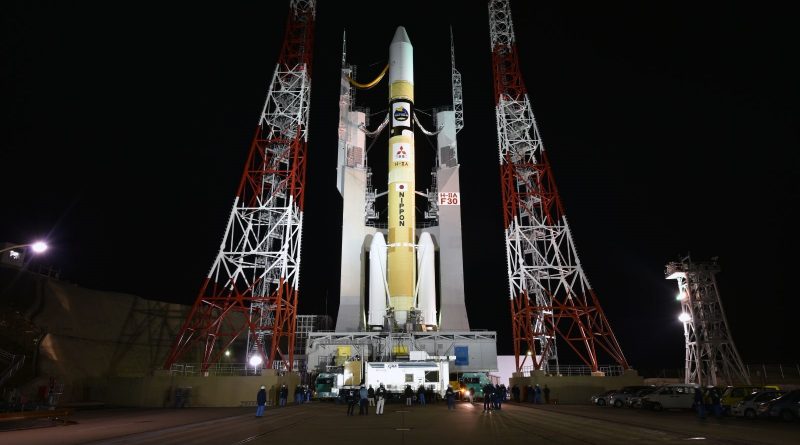 Liftoff – pushed from Tuesday due to bad weather – is expected at 6:20 UTC, the opening of a launch window of nearly three hours. Blasting off from the southern tip of Tanegashima Island, the 53-meter tall H-IIA will scream away with a thrust of 685 metric tons, delivered by a cryogenic core stage and a pair of Solid Rocket Boosters which will fire for the first 100 seconds of the flight.

With the boosters gone, the core continues to fire its 109-metric ton force LE-7A engine until six and a half minutes into the flight, handing off to the cryogenic second stage which will be tasked with a pair of burns of its LE-5B engine – first a five and a half-minute burn into a Parking Orbit ahead of a burn of a little over three minutes to boost the 3,500-Kilogram satellite into Geostationary Orbit with separation planned 28 minutes after liftoff.


This is Japan’s second launch of the year following up on the Astro-H (Hitomi) space observatory in February which enjoyed a flawless launch but succumbed to a chain of onboard failures just a few weeks into the mission well before any meaningful observations of the X-Ray universe could be made.

Himawari-9 is the second in a pair of identical Geostationary Meteorological Satellites (GMS) ordered from Mitsubishi Electric in 2009 by the Japanese Meteorological Agency. The Himawari-8 satellite was lifted into orbit in October 2014 to replace the aging Himawari-6 satellite launched in 2005 and to significantly enhance global imaging capabilities with the inauguration of the Advanced Himawari Imager (AHI) – the main instrument of the new generation of satellites.

The Himawari-8/9 satellites are currently the most advanced Geostationary MeteoSats in terms of image resolution, spectral coverage and image acquisition time – obtaining a global scan every ten minutes in addition to images of the Japanese territory every two and a half minutes. The GOES-R-class satellites operated by NASA and NOAA – set to debut later this month – have identical spectral coverage and resolution but will surpass Himawari in terms of collection speed.

Built by Mitsubishi Electric based on the DS-2000 Geostationary Satellite Bus, Himawari-9 weighs 3,500 kg at liftoff and hosts a single power-generating solar array that is deployed once in orbit. The main instrument, AHI, was developed by Exelis and covers 16 spectral bands, three in the visible wavelengths at a resolution of 0.5/1 Kilometers and 13 infrared channels at a two-Kilometer resolution.

The two-axis imaging instrument sweeps out image strips in the East-West directions and steps North/South for each successive scan to assemble a global frame every ten minutes, requiring 23 North/South steps. In addition, three regional frames will be collected every 2.5 minutes covering Japan plus a targetable region of interest to deliver high-speed data on targets such as Typhoons.

Himawari’s spectral coverage permits data to be used for a variety of applications including environmental monitoring and operational weather now- and forecasting. The infrared channels are used to deliver relevant data for the observation of cloud distribution and properties, atmospheric water, aerosols, rainfall, temperature and a number of other properties.

The Himawari satellites also carry a data collection system terminal to receive data from deployed terminals such as remote weather stations and sea-state platforms. Space Radiation is monitored by a dedicated detector to provide data on the radiation environment in Geostationary Orbit.

Himawari 8 and 9 each are built for a 15-year lifetime including eight years of primary service delivering meteorological data, ensuring operational service will be available through 2031.

Himawari-9 was originally set for liftoff on November 1st, but a bad weather forecast for the rocket’s rollout on Monday prompted the decision to push the rollout to Tuesday and set up for liftoff on Wednesday at 3:20 p.m. local time. The mission has a luxuriously long window of two hours and 58 minutes, providing plenty of time to deal with any hold-ups in the countdown. Weather is expected to be favorable with temperatures around 22°C, mostly clear skies and light winds at 7 meters per second.

H-IIA began its rollout to the launch pad at 16:30 UTC on Tuesday, marking the start of the rocket’s countdown. It takes around half an hour for the rocket to complete the 400 meter trip from its Vehicle Assembly Building before being carefully centered on the launch pad to begin the connection of ground system umbilicals.

About eight hours before launch, teams evacuate the launch pad to get ready for the long propellant loading sequence.

The propellant loading sequence takes approximately three hours until 116,600 Kilograms of cryogenics needed for launch are on board. Replenishing the propellants as they boil off, the tanks are kept at topping level until late in the countdown.

As computers are given control of the countdown, H-IIA’s Propellant Tanks will be pressurized for flight. At X-3 minutes, the launch vehicle is switched to internal power while Himawari-9 will have been switched to battery power ahead of the final countdown sequence. One minute before liftoff, thousands of Kilograms of water are being poured over the launch platform to suppress the acoustic loads at ignition & liftoff.

As the boosters ignite, H-IIA will jump off its pad with a total thrust of 684,500-Kilogram-force. The twin boosters deliver 78% of the total liftoff thrust as the H-IIA climbs away from its sea-side launch pad with the usual scream unique to Japan’s H-II rockets.

The 285-metric ton launch vehicle will make a short vertical ascent before executing its roll and pitch program to achieve the planned ascent trajectory – flying south-east for a trip across the Pacific, heading for an orbit inclined 22.4 degrees.

The two boosters fly in a special configuration with a shorter burn time, but higher thrust – optimized for a GTO mission profile. Each of the twin boosters will be delivering 281,200-Kilogram force of thrust over the course of a 98-second burn to accelerate the launcher to a speed of 1.5 Kilometers per second.

As thrust on the boosters tails off when their solid propellant is depleted, sensors will detect a pressure-drop and trigger the separation of the 15-meter long boosters around ten seconds after burnout at an altitude of 53 Kilometers.

With the boosters gone, the 37.2-meter Core Stage will continue powered ascent using the LE-7A alone, burning 260 Kilograms of cryogenics per second to generate 109,300 Kilogram-force of thrust when flying in the tenuous outer layers of the atmosphere.

When reaching an altitude of 142 Kilometers at a mission elapsed time of four minutes and five seconds, H-IIA will separate its protective payload fairing, exposing the payload on its way uphill and shedding no-longer needed weight.

The first stage will continue operation until T+6 minutes and 36 seconds, boosting the stack to a velocity of 5.3 Kilometers per second. Stage separation occurs eight seconds after cutoff at an altitude of 220 Kilometers as pyrotechnics cut the connection between stages and springs push the Core Stage away.

The LE-5B engine of the second stage will ignite six seconds after stage separation, at T+6:50 to deliver 13,970kgf of thrust for a burn of five minutes and 20 seconds tasked with lifting the stack into a Parking Orbit around 250 Kilometers in altitude.

With the conclusion of the first burn of the 9.2-meter long second stage, the vehicle enters a coast phase of eleven and a half minutes, continuing on a south-easterly heading targeting a point near the equator for the second ignition in order to insert Himawari-9 into a Geostationary Transfer Orbit peaking over the equator which eases the process of phasing the satellite into its operational orbit.

At T+23 minutes and 50 seconds, the second stage will re-ignite on a burn of three and a quarter minutes that will raise the apogee of the orbit to Geostationary Altitude. Himawari-9 is targeting an insertion orbit of 250 by 35,976 Kilometers at an inclination of 22.4 degrees.

Second stage shutdown is expected just after hitting T+27 minutes with injection at an altitude of 250 Kilometers and a velocity of 10.2 Kilometers per second.

Himawari-9 will be separated just before T+28 minutes, beginning to execute a pre-programmed sequence of establishing a stable three-axis orientation, initiate communications with ground stations and deploying its single solar array. Over the first hours and days, the spacecraft completes a series of health checks to make sure it made it into orbit in good shape. A few days into the mission, Himawari-9 will begin raising its orbit to enter Geostationary Orbit for a several months of checkouts and commissioning before being cleared for regular service.