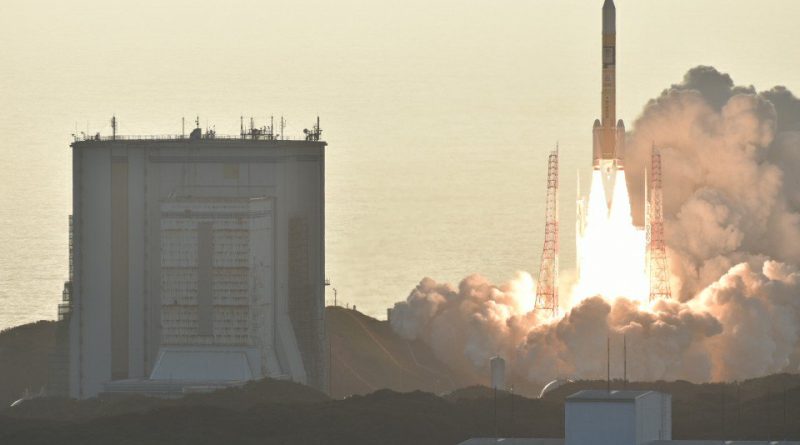 The 53-meter tall H-IIA raced off into the morning skies at 7:01:37 a.m. local time, 22:01 UTC on Monday, heading out over the Pacific Ocean to deploy the fourth satellite in the Quasi-Zenith Satellite System, set to reach its fully operational capabilities by the middle of 2018 for 24/7 navigation augmentation over the Japanese Islands, also providing an additional navigation beacon to the broader Asia-Pacific Region.

The ascending rocket dropped its two Solid Rocket Boosters under two minutes after launch and the cryogenic core stage continued firing until the six-and-a-half-minute mark when the second stage took over for a pair of firings, first to enter a preliminary orbit and again to boost the 4,000-Kilogram QZS-4 satellite into a highly elliptical transfer orbit. Over the coming days, the satellite will maneuver into a slot between the first two constellation satellites to mark the beginning of final commissioning work to bring the system to full capacity.


H-IIA made its 36th overall flight Tuesday morning and flew for the fifth time this year – marking a new record for the vehicle as the previous best was four launches in 2006 and 2014.

Japan’s Quasi Zenith Satellite System (QZSS) represents a single spacecraft in Geostationary Orbit, remaining locked in the same position of the sky, and a trio of satellites in a specialized elliptical orbit that allows each to dwell at high elevation over Japan for eight hours per day – providing an additional reference point for GPS receivers installed in cars, phones and other consumer devices that may otherwise not find a sufficient number of satellites overhead when navigating the urban canyons of Japan’s large cities as tall buildings block out or scatter signals  from satellites that are lower in the sky.

GPS currently operates thirty active satellites in six orbital planes some 20,200 Kilometers in altitude, each transmitting broadcast signals from which ground receivers can triangulate their position. At least four satellites have to be in view for a receiver to calculate its position with three used for triangulation and the fourth for time synchronization. Through the addition of at least one QZSS satellite at high elevation, the odds increase for a sufficient number of GPS-transmitters being visible for users, even between high-rise buildings.


QZSS takes a unique spot in the world’s navigation satellite systems as an augmentation architecture for a foreign constellation. Augmentation services are provided in a twofold manner: a) by sending GPS-compatible navigation signals in the L1, L2 and L5 bands to increase GPS availability and b) by relaying L1S and L5S augmentation signals generated on the ground to allow equipped receivers to factor signal corrections into their position calculations to yield a more precise result.

QZSS as a project was initiated in 2002, starting out under the auspices of an industry consortium which eventually dissolved and handed the project off to JAXA for further development work. The U.S. provided clearance in 2006 for QZSS to use the GPS navigation bands, a major prerequisite to the launch of the first QZS pathfinder satellite in 2010 on a proof-of-concept mission.

By 2011, the Michibiki-1 satellite had been declared healthy and began transmitting signals for extensive calibration and characterization, showing that GPS accuracy with augmentation messages from the satellite increased by a factor of 2.5. The promising results delivered by QZS-1 paved the way for the deployment of an operational QZSS constellation and JAXA ordered three satellites from Mitsubishi Electric in 2014 under a $526 million contract.

Initially baselined as a three-satellite constellation operating in elliptical 24-hour orbits to serve the Japanese islands, the system was expanded through the addition of a single Geostationary Satellite that could transmit augmentation messages to the entire Asia-Pacific Region.

With the path cleared for QZSS operational services, JAXA lined up a rapid fire campaign to get all three satellites into orbit within a four-and-a-half-month period in 2017. QZS-2 lifted off on June 1st and joined the Michibiki-1 satellite in what is known as Tundra orbit while QZS-3, the heaviest member of the group tipping the scales at 4,800kg, launched on August 19 and since entered Geostationary Orbit. QZS-4, an identical copy of QZS-2, will phase into the slot between the 1 and 2 satellites to have at least one satellite at elevation angles of 60 degrees or higher, as seen from the Japanese territory.


Based on the flight-proven DS-2000 satellite platform, QZS-4 stands 6.2 meters tall and has a launch mass of 4,000 Kilograms, including 370kg for the navigation payload. At the heart of the navigation package sits a pair of redundant Rubidium Atomic Clocks that provide the ultra-stable timing needed for the generation of the navigation signal that is transmitted via an L-Band antenna.

While the navigation signals are generated on board the satellite using the precise clocks as reference, augmentation messages are assembled on the ground by monitoring GPS signal variability through an array of ground stations across Japan and surrounding regions which detect GPS clock errors and other factors like signal delay caused by changes in Earth’s ionosphere. Correction data for these varying factors is uplinked to the QZS satellite which immediately re-transmits it to any enabled receiver in its footprint to then apply the corrections to its navigation solution to yield a more accurate location, on average with one-meter accuracy.

An expansion of QZSS to seven satellites is planned in the 2020s to add three craft to the elliptical orbit constellation segment so that two satellites dwell at high angles over Japan at any given time.

H-IIA, gearing up for its 36th launch since debuting in 2001, rolled to Launch Pad 1 at the sea-side launch complex at 10 UTC on Monday, two hours later than planned after an umbilical on the rocket had to be re-tensioned. Standing 53 meters tall, the H-IIA 202 launch vehicle comprises a two stage stack measuring four meters in diameter and a pair of SRB-A3 Solid Rocket Boosters attached to the first stage. Weighing 285 metric tons at launch, H-IIA 202 can lift 4,100 Kilograms into Geostationary Transfer Orbit.

The two-hour delay to the rollout was made up through on-pad schedule margin and H-IIA entered its Terminal Countdown Operation at 13:30 UTC with launch vehicle activation and checkouts. Over the course of a three-hour sequence, the two-stage launch vehicle was loaded with 120 metric tons of -183°C Liquid Oxygen and Liquid Hydrogen, stored at -253°C. Confirmation that both stages had reached flight level was provided at 17:13 UTC and tanks were kept topped up for the remainder of the countdown.

Final testing wrapped up as the sun came up over Tanegashima less than one hour before the instantaneous launch opportunity. As the countdown switched to auto-mode at X-4.5 minutes, H-IIA pressurized its propellant tanks, transferred to internal power and switched to onboard control before activating thermal batteries and completing a final thrust vector control check on the boosters to clear the way for ignition.

H-IIA fired up its LE-7A main engine at X-5.2 seconds, soaring to a liftoff thrust of 86 metric ton-force under close watch by computers before the point of no return – ignition of the twin boosters when clocks its zero, catapulting the vehicle skyward with a total thrust of 596 metric tons.

H-IIA balanced in a vertical orientation for only a few seconds before its engine and boosters gimbaled to place the vehicle onto a south-easterly departure path across the Pacific Ocean, burning 1,600 Kilograms of propellant each second of powered flight.

The familiar scream of the H-II family was audible as the vehicle made its early morning departure, passing Mach 1 less than a minute into the flight and encountering Maximum Dynamic Pressure shortly thereafter with the boosters entering a ‘bucket’ in their thrust profile to reduce stress on the climbing rocket.

The SRB-A3 boosters did most of the heavy-lifting in the early portion of the flight, each burning through 66 metric tons of propellants to generate 255 metric ton-force of thrust over a 98-second burn. Optimized for high-energy missions by providing higher thrust over a shorter burn, the 15-meter long boosters helped accelerate H-IIA to 1.5 Kilometers per second and dropped away one minute and 48 seconds after launch, using their thrust struts to ensure a clean separation.

Jettisoning the boosters 54 Kilometers in altitude, H-IIA headed on toward space powered by the LE-7A alone, burning 260 Kilograms of propellant per second to generate a vacuum thrust of 109,000 Kilogram-force. Four minutes and ten seconds into the flight, H-IIA crossed 151 Kilometers in altitude and separated its protective payload fairing to shed no-longer-needed weight on its way into orbit.

The rocket’s first stage boosted the vehicle’s speed to 5.2 Kilometers per second, shutting down its engine six minutes and 38 seconds after liftoff. Springs pushed the 37-meter long first stage clear of the upper stage six seconds after main engine cutoff as it handed powered flight duties over to Stage 2 for a pair of engine burns to lift QZS-4 into its desired transfer orbit.

The 14,000-Kilogram-force LE-5B engine started up just shy of seven minutes into the launch, tasked with accelerating the vehicle to orbital velocity to reach an initial Low Earth Parking Orbit. The five-minute and 37-second LE-5B burn was by the book with shutdown occurring 290 Kilometers over the Pacific Ocean, marking the start of a 12-minute coast phase.

Instead of a mission to Geostationary Transfer Orbit that aims to minimize inclination, H-IIA was actively working to increase orbital inclination, targeting a highly elliptical orbit of 250 by 36,140 Kilometers, inclined 31.9 degrees.

Re-start of the second stage was confirmed at X+24.5 minutes on a burn of exactly three minutes to raise the vehicle’s speed by 2.5 Kilometers per second and accomplish the high-energy injection required by Michibiki-4. Altitude and velocity closely matched the pre-launch prediction at SECO-2, indicating H-IIA had hit its orbital cutoff target with precision.

QZS-4 was sent on its way via spring-loaded separation fifty seconds after engine shutdown, embarking on a 15-year mission dedicated to delivering reliable and accurate navigation to users in Japan’s canyon-like city streets and aviators across the Asia-Pacific Region. Its mission will begin with a series of firings of the R-4D main engine to spiral the spacecraft up into the specialized Geosynchronous Orbit of the QZS constellation that describes a Figure 8 with its ground track and dwells over the Japanese Islands with a high point of 38,900 Kilometers.

Checking off its fifth orbital delivery of the year, H-IIA can look back at three flights in support of QZSS, the deployment of a classified Information Gathering Satellite and the launch of the DSN-2 military communications satellite. Japan’s next orbital launch was expected in November when an Epsilon rocket was to launch with the ASNARO-2 satellite; however, this mission has been delayed due to an electrical problem on the rocket. H-IIA will next see action with the launch of the GCOM-C climate satellite, a mission that has yet to receive a launch date.