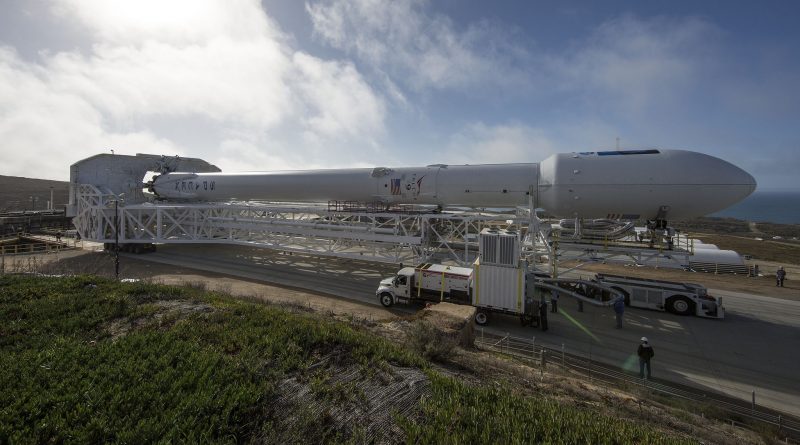 A fully assembled Falcon 9 rocket has been rolled to the launch pad at Space Launch Complex 4E at Vandenberg Air Force Base for the first time in over two years for Sunday’s planned launch of the U.S.-European Jason-3 Oceanography Satellite. Liftoff is expected at 18:42:18 UTC during a half-minute window and the Falcon 9 will be tasked with a 56-minute ascent mission that will again see an attempt to return the first stage booster to a floating platform deployed to the Pacific Ocean.

The mission is the final launch of the Falcon 9 v1.1 rocket that made its maiden launch from the West Coast Pad in September 2013 and is now making way for the Full Thrust version of Falcon 9 that offers a 30% increase in performance through the use of up-rated engines and densified propellants. Looking back at its career, Falcon 9 v1.1 so far checked off 13 successful missions in 14 launches and began paving the way towards SpaceX’s ambitious goal of re-using first stage boosters. SpaceX hopes to add another successful mission to the vehicle’s record and possibly close out its career with a successful landing.

The Jason-3 satellite was installed atop the Falcon 9 rocket on Wednesday following the successful completion of the rocket’s Static Fire Test on Monday that saw the nine Merlin 1D engines on the first stage soar to life for a seven-second burn to gather performance data. Reviews of data collected during the full-countdown and brief ignition showed that Falcon 9 and the ground systems at the launch pad are ready to support Sunday’s operations.

Jason-3, looking back at a lengthy road to launch, completed a final set of checkouts and battery charging operations before being installed atop its ride into space. Rollout of Falcon 9 occurred on Friday ahead of Falcon 9 going vertical on Saturday to be ready for countdown operations on Sunday, set to pick up several hours before the short launch window. Final clearance to head into launch operations was given by a clean Flight Readiness Review on Friday.

Weather will not get in the way on Sunday as forecasts show a 100% chance of acceptable weather conditions with only a high cloud layer obstructing the view of the ascending Falcon 9 rocket. For the first stage return, sea swell may be up to three to five meters which could become a challenge for the drone ship. In case of a launch delay on Sunday, a backup slot is available at 18:31 UTC on Monday with a 70% chance of cooperative weather as concerns associated with clouds and disturbed weather arise.

Getting ready to catch a Falcon 9 is the Autonomous Spaceport Drone Ship “Just Read The Instructions” that will be stationed almost 300 Kilometers due south of the launch site. A boost-back to a landing at the new landing zone at Space Launch Complex 4W is not possible on this mission as environmental assessment work is still ongoing to clear Falcon 9 to overfly a wildlife preservation on its inbound leg. The Drone Ship departed Long Beach early on Friday along with its support vessel and was expected to arrive at the designated landing zone sometime on Saturday for a final set of preparatory steps.

Countdown operations will be initiated around ten hours ahead of launch with the power-up of the Falcon 9 for an extensive set of testing activities and preparatory steps. At the pad, teams will work through final close outs of the rocket and ground systems before the launch team is polled for a go/no-go for propellant loading at L-4 hours. Range instrumentation will be prepared and controllers will begin watching over corridor clearance around the same time.

Loading of Kerosene propellant into the two stages of the Falcon 9 will commence before supercold Liquid Oxygen is loaded into the vehicle starting around three hours prior to liftoff. In total, Falcon 9 will receive over 480 metric tons of propellant plus nitrogen attitude control system propellant and helium tank pressurant gas.

Going through a final set of steps before launch, Jason-3 will switch to battery power and the launch team will complete the Go/No-Go poll to enter the critical automated countdown sequence at T-10 minutes – a highly choreographed set of steps to pressurize the rocket’s tanks, retract the Strongback structure, chill the engines for ignition and put the flight computers in charge of all vehicle functions.

Lifting off under the power of its nine Merlin 1D engines, the 68-meter tall Falcon 9 will rise vertically with a total thrust of over 600 metric-ton force before pitching and rolling onto a southerly trajectory. The vehicle will pass through Mach 1 just over a minute after launch with Maximum Dynamic Pressure following shortly thereafter.

Shutdown of the first stage is expected two minutes and 34 seconds after launch with stage separation three seconds later. For the second stage, the flight begins with a burn of over 6 minutes to head into an elliptical parking orbit for a coast phase of 45 minutes to climb up to apogee so that the second burn can serve as a circularization maneuver.Fairing separation occurs three minutes and 12 seconds into the flight.

The second burn, occurring 54 minutes into the flight, will also facilitate an adjustment of the the orbital inclination. Jason-3 will be separated 55 minutes and 48 seconds after launch and aims for an operational orbit of 1,328 by 1,380 Kilometers, inclined 66.05°.

After spacecraft separation, the second stage will perform a targeted deorbit burn, igniting its MVac engine for a third time to set up destructive re-entry over the Pacific Ocean one orbit after launch.

For the first stage booster, the adventurous return to Earth begins immediately after separation with a maneuver out of the plume of the second stage. Sill ascending, the stage will flip around to face its engines towards the direction of travel and make use of its cold gas thrusters to settle the propellants inside the tanks for a partial boost back maneuver starting at T+4:25 to aim for the location of the Drone Ship.

Heading back towards the atmosphere, the booster will deploy its four aerodynamic grid fins to provide guidance during atmospheric descent. A short re-entry burn using a subset of the Merlin 1D engines will begin to slow the vehicle down and protect the booster from the extreme aerodynamic environment occurring during entry. What follows will be a fast descent through the atmosphere during which the grid fins are actuated to modify the angle of attack of the booster to control its downrange travel distance.

Firing up its center engine just around half a minute prior to touchdown, the booster will home-in on the SpaceX logo painted on the drone ship platform, deploy its four landing legs and hopefully come to rest upright on the ASDS around nine minutes after liftoff. Should the landing succeed, teams will conduct a remote survey of the booster and safe its propellant systems before engineers can return to the ASDS and secure the first stage for its return to shore. Whether the recovered booster would return directly to Vandenberg or be brought back to Long Beach for offloading has not been specified.

Arriving in orbit, Jason-3 will begin its initial steps of acquiring a stable orientation, starting communications with the ground and deploying its two power-generating solar arrays around two minutes after separation. Teams will begin working a multi-day campaign to put the spacecraft through initial testing and commissioning activities before heading into instrument commissioning taking a period of weeks.

Jason-3 weighs in at 525 Kilograms and sets out to continue a record of ocean surface topography measurements, started by the Topex/Poseidon satellite in 1992 and continued through Jason-1 launching in 2001 and OSTM/Jason-2 that has been in operation since 2008. The ocean altimetry measurements are of vital importance when following the global circulation patterns, sea level changes and climate implications in a constantly warming world. Long-term and continual data of changes in the oceans is essential for both, operational applications and scientific research.

The primary instrument on the Jason-3 mission is a radar altimeter that can measure variations in sea level over the global oceans with a very high accuracy of 3.3 centimeters. Also installed on the satellite is an Advanced Microwave Radiometer to deliver data for correction of active altimeter data as well as a Joint Radiation Experiment to study the effect of space radiation on modern electronics.