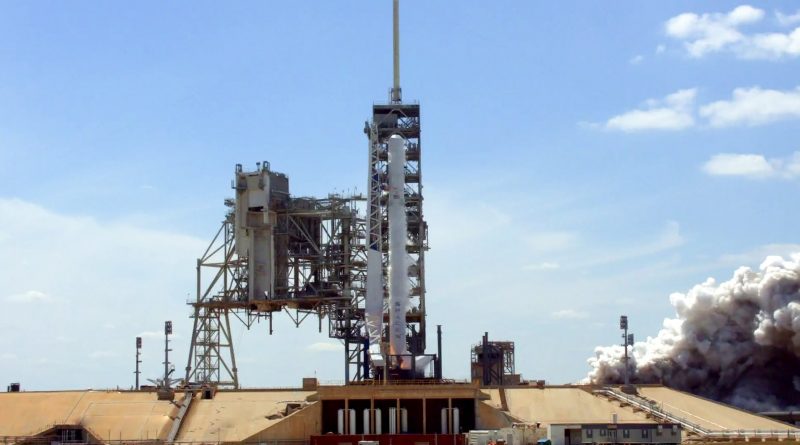 SpaceX’s Falcon 9 is aiming for a Sunday liftoff from Florida’s Space Coast on the company’s first classified satellite delivery for the secretive National Reconnaissance Office in charge of operating all U.S. spy satellites.

Hidden under Falcon 9’s payload fairing is the NROL-76 satellite headed to a classified orbit to join a fleet of satellites tasked with collecting intelligence, supporting secure communications and exploring technologies for the spy satellites of the future.

Liftoff from Kennedy Space Center’s Launch Complex 39A is planned for a two-hour window opening at 11 UTC. Departing Florida to the north-east, Falcon 9 will fire its first stage for 137 seconds, marking the shortest first stage burn in the rocket’s flight history, before the MVac-powered second stage takes over to push the satellite into its classified orbit. Falcon 9 will fly into a pre-arranged news blackout when the rocket’s clamshell-type fairing drops away just shy of three minutes into the flight.

While the second stage heads into orbit out of public sight, the 47-meter tall first stage will home in on Cape Canaveral’s Landing Zone 1 via a propulsive U-turn ahead of an Entry Burn and a single-engine landing maneuver that aims to gently set the booster down on its four landing legs. It will be the fourth land-based recovery attempt for the Falcon 9, all three previous on-shore landings have been successful.


Sunday’s hush-hush mission comes on the heels of SpaceX’s first booster re-flight mission with the SES-10 satellite one month ago. However, the NRO flight will use a brand-new launch vehicle, marking the 33rd flight of Falcon 9 since 2010 and the fifth SpaceX mission this year as the company continues work to accelerate its launch pace to tackle a busy manifest.

The identity of the NROL-76 payload has been a mystery ever since its existence became known in 2016 when NRO officials disclosed the agency had booked a ride on SpaceX’s workhorse rocket. The contract award for NROL-76 dates back to 2013 or even mid-2012 when SpaceX was still in the midst of transitioning from the original Falcon 9 version to the much improved Falcon 9 v1.1.

As one of the big five intelligence agencies in the U.S, the NRO goes through great lengths to keep its activities and the identities of its satellites secret, but only with partial success as occasional leaks of information and an eager network of satellite trackers often reveal the nature of NRO missions. However, NROL-76 has proven to be a difficult case to solve, not only because it is the first dedicated NRO launch performed by SpaceX.


Safety areas identified for Sunday’s launch show Falcon 9 will depart the Cape to the north-east – ruling out a geostationary satellite delivery but leaving a number of options on the table as a north-easterly departure can reach a variety of Low Earth Orbits as well as highly elliptical Molniya Orbits employed by communications and missile warning assets for optimized coverage of the extreme northern regions where viewing angles from Geostationary Orbit are extremely low.

The fact that Falcon 9 will be making a Return-to-Launch-Site recovery shows this particular mission has plenty of performance margin – either aiming for a low-energy orbit or lifting a fairly light payload. If heading for Low Earth Orbit around 500 Kilometers in altitude, NROL-76 could be as heavy as eight metric tons while the higher-energy Molniya delivery would restrict the payload mass to around 2.3 metric tons.

If ending up in a 12-hour Molniya Orbit, the prime candidate for the NROL-76 mission is a fourth-generation craft belonging to the Satellite Data System – a constellation of satellites in high orbits tasked with relaying imagery collected by low-orbiting reconnaissance craft to their operators in real time. SDS has been in operation since the late 1970s and typically used a combination of satellites in Geostationary Orbit and Molniya Orbits to enable real-time relay from high-latitude regions while also supporting secure communications for Air Force aircraft and satellite control stations.

The last SDS satellite launched into Molniya Orbit was NROL-24 (USA-198) in 2007 and speculation emerged in recent years that SDS could be transitioning to an all-GEO system. If that is not the case, a replacement for the aging Molniya satellites would have to reach orbit relatively soon.

The 2.3-metric ton Molniya Orbit performance of Falcon 9 lies right in the range for Boeing’s all-electric BSS-702SP satellite platform, three of which were ordered by the U.S. Government in 2013 but are yet to be attributed to a satellite program.

Should NROL-76 be headed for LEO, the palette of potential candidates is much bigger, however, the mission appears not to be linked with any existing NRO constellation because the launch window remained the same after a slip from mid to late April. Windows for a planar mission would shift by several minutes per day.


The NROL-76 mission patch depicts a pair of explorers (possibly Lewis & Clark), one peering into the distance through a telescope while the other has a stern look on his face and a rifle at the ready. The words ‘Explore – Discover – Know’ are inscribed on the patch.

Some guesswork usually revolves around the NRO’s patches to find hints to a mission’s identity. For NROL-76, a reasonable conclusion seems to be a one-off reconnaissance or technology demonstration satellite, possibly exploring a new type of sensor or wavelength band for use on a future intelligence-gathering mission.

A similar mission in 2006 aimed to validate radar sensors for the Topaz satellites currently in service for the NRO, but that mission ended with the USA-193 satellite failing shortly after liftoff and being purposefully destroyed in 2008 to avoid hazards associated with the craft’s re-entry.

Satellite Trackers around the globe will be paying close attention to the NROL-76 launch and will swing into action to spot the craft in its classified orbit. Once orbital parameters are known, more will become clear on the purpose the craft servers and trackers will be looking for activity such as orbital maneuvers or changes in brightness that could reveal whether the satellite carries any large appendages like radar antennas.

Falcon 9 stood tall atop its LC-39A launch pad on Tuesday to be filled with propellants and briefly fire up its nine Merlin 1D engines for the usual Static Fire Test conducted by SpaceX for each mission. The rocket then moved back into its hangar to receive its top-secret payload before rolling out again on Saturday to get set for a lengthy countdown operation starting in the overnight hours.

Meteorologists are optimistic about Sunday’s launch attempt, giving an 80% chance of cooperative weather conditions. The current weather pattern is influenced by a high pressure area over the Bermudas and a low-pressure system moving over the Gulf Coast states, creating southeasterly winds over the Space Coast and bringing the potential of coastal showers. Primary concerns for Falcon 9 are high ground winds and violations of the cumulus cloud rule. Should the launch slip to Monday, the front will advance into the Florida Panhandle and add a concern of thick cloud rule violations.

Countdown operations will pick up with the activation of the Falcon 9 rocket for a lengthy testing campaign while teams at the launch pad finish close outs of the vehicle and button up all ground facilities for launch. With the pad cleared around three hours to launch, Falcon 9 will head into final tanking setup steps and a repetition of critical communication and Flight Termination System testing.

The Launch Team will be polled for a go/no-go for tanking at around L-73 minutes before the automated countdown sequencer kicks in at T-70 minutes to take Falcon 9 through the highly choreographed fueling operation. Rocket Propellant 1, chilled to -7°C, will start flowing into the two-stage rocket right away while the oxidizer side enters chilldown before the sub-cooled LOX begins flowing into the vehicle along with cryogenic Helium needed for tank pressurization in flight.

The pace of countdown events picks up noticeably inside T-7 minutes, starting with the chilldown of the rocket’s Merlin engines, exercises of various valves in the engines, the transition to internal power, arming of the flight termination system and priming of the Strongback structure for its rapid retraction at the moment of liftoff. Falcon 9 will finish propellant loading at the T-2-minute mark and a final GO will be given by the Eastern Range and the Launch Director before Falcon 9 assumes full control of the countdown at T-1 minute to oversee the pressurization of tanks ahead of igniting the engines.

Soaring to life, Falcon’s nine Merlin 1D engines will reach a collective launch thrust just shy of 700 metric ton-force to lift the 70-meter tall rocket off the ground. Following liftoff, Falcon 9 will balance in a vertical position before pitching and rolling onto its north-easterly trajectory to depart Florida’s Space Coast.

The NROL-76 mission will feature the shortest first stage burn for Falcon 9 to date, firing the Merlins for just 137 seconds to dispatch the second stage on its way to orbit. Back in 2015, the second Orbcomm mission flown by SpaceX fired the first stage for 140 seconds and the Dragon SpX-9 and 10 missions that also made an RTLS recovery fired the stage for 141 seconds.

Additionally, the NROL-76 mission will experience Maximum Dynamic Pressure at T+68 seconds, earlier than any mission before, indicating a different flight profile will be used by the Falcon 9. Some observers speculated that this could be a sign of Falcon 9 utilizing a higher thrust setting which has been announced would be part of the rocket’s Block 5 upgrade expected later this year, however, no information was released by SpaceX that would indicate this to be the case for this mission.

Another indication of an extremely lofted trajectory being utilized on Sunday comes in the early fairing separation time at T+2 minutes and 48 seconds. Regardless of payload, fairing separation on Falcon 9 normally comes at an altitude of 110 Kilometers, occurring around 3:40 into the flight on GTO missions and earlier for LEO deliveries that usually employ a steep ascent on the first stage an initial portion of the second stage to reach circular orbits with a single upper stage burn. This type of lofted trajectory may further build the case for NROL-76 being a LEO satellite.

Following MECO at T+2:17, the first stage will be pushed away from the second stage three second later, clearing the 95,000 Kilogram-force MVac engine for ignition two minutes and 28 seconds into the flight. Fairing separation will be the last primary mission item to be confirmed to the public as Falcon 9 enters the typical news blackout of NRO missions, though confirmation of launch success will be provided after the payload is separated in orbit.

For the first stage, flying a lofted trajectory is beneficial as it limits the downrange travel distance and makes the return to Florida easier. Immediately after separation, the booster will fire up its cold gas thrusters to flip around and face its engines toward the direction of travel for a full boost-back maneuver, igniting a subset of the nine Merlins to reverse its travel direction and accelerate toward the Space Coast.

Seven minutes and nine seconds into the flight, the first stage will light three of its engines for the entry burn, hitting the brakes to create a more benign entry environment. Next will be a brief unpowered descent during which the four actuated grid fins will keep the vehicle stable and adjust its path toward Landing Zone 1, flying out any cross track errors and modifying the vehicle’s angle of attack to manage the downrange travel distance.

The center engine will light up just after T+8 minutes to slow the booster down for a gentle landing on four fold-out landing legs that will deploy seconds before touchdown. If successful, this will be SpaceX’s fourth land-based landing and the tenth successful recovery overall.