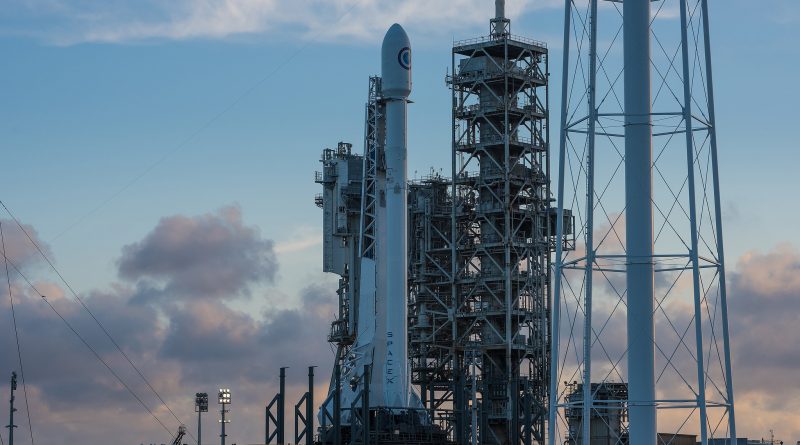 SpaceX called off Sunday’s planned launch attempt of the company’s Falcon 9 rocket with the classified NROL-76 payload for the U.S. National Reconnaissance Office. Per standard company procedure, the countdown was taken down the wire until a Hold was called inside T-1 minute due to a problem on the rocket’s first stage.

The Launch Team immediately pressed into procedures for a 24-hour recycle to set up a Monday morning liftoff from Launch Complex 39A at the Kennedy Space Center with a window of 7 to 9 a.m. local time, 11 to 13 UTC. SpaceX said the company was holding off in an abundance of caution and will re-evaluate whether a 24-hour turnaround is possible after de-tanking the rocket on Sunday.

Meteorologists expect weather conditions to worsen slightly from an 80% to a 70% chance of favorable conditions during the two-hour window as a low pressure front advances toward Florida from the Gulf states and takes over influence from a high pressure region that is fading over the Bermudas. As the front makes its way into the Florida panhandle by Monday morning, the potential rises for upper level cloudiness. Primary weather concerns are high liftoff winds and violations of the thick cloud rule.


Countdown operations for Sunday’s launch attempt had been quiet for the most part of the lengthy countdown that picked up in the overnight hours with a multi-hour checkout sequence on the Falcon 9 and its various subsystems. Dawn was slowly breaking over Cape Canaveral when the launch team approved Falcon 9 to press into its automated countdown sequence at T-70 minutes to take the two-stage rocket through its complex propellant loading operation.

Prop load picked up with RP-1 flow to both stages while the oxidizer side went through a final chilldown of tanks and lines before the sub-cooled Liquid Oxygen began flowing around T-45 minutes.

While propellant loading was going through its usual throttle sequence, Launch Controllers became aware of a suspect signature from a sensor on the rocket’s first stage. Per the usual procedure, no hold was called in Falcon 9’s countdown timeline and teams began diagnosing the issue while the automatic sequencer continued taking Falcon 9 through propellant loading and into terminal countdown starting with engine chilldown at T-7 minutes.


The Launch Director called the countdown to be held just inside T-1 minute with clocks coming to a stop at T-52 seconds. It is SpaceX procedure to leave any hold up to the Chief Engineer, Mission Director or Launch Director.

Taking the countdown down to the last minute also provides another full exercise of Falcon 9 and its ground systems to uncover any other issues if present.

The most likely cause of Saturday’s scrub was a faulty piece of instrumentation, one of two Liquid Oxygen outlet temperature sensors on the first stage and the forward plan is to switch the sensor in question which may require Falcon 9 to be moved into a horizontal position. SpaceX was still assessing whether repair work needed on the vehicle would be possible in a 24-hour turnaround following de-tanking of the rocket after the scrubbed attempt.

If SpaceX will not be able to make Monday’s backup slot, a new attempt would have to be booked on the Eastern Range, however, there is currently very little activity on the range schedule in terms of rocket launches other than SpaceX’s, giving the company flexibility in setting a new attempt.

What is hidden by Falcon 9’s payload fairing and where it is headed remains a mystery, however, some light on the possible identity was shed by NRO officials present at the Kennedy Space Center. According to official NRO information, the agency did not directly book a ride with SpaceX but contracted with Ball Aerospace which then secured the Falcon 9 launch vehicle. This is indicative of a ‘delivery in orbit’ type of contract which would make Ball Aerospace the manufacturer of the NROL-76 satellite.

To date, Ball Aerospace has built a reputation for optical instrumentation carried by Earth-orbiting satellites and interplanetary spacecraft, as well as a number of small- and medium-class satellites. The largest satellite platform offered by Ball Aerospace is the BCP-5000 that can carry sizeable payloads and has been optimized for Earth-observation missions. BCP-4000 is similarly massive, but optimized for Synthetic Aperture Radar instruments.

WorldView-3 is the biggest satellite manufactured by Ball, weighing in at 2,800 Kilograms. NROL-76 is likely in a similar mass range, giving Falcon 9 plenty of excess performance for the first stage return to Landing Zone-1 and the second stage deorbit maneuver.


What payload the satellite might be carrying is up for speculation. The NROL-76 patch features a pair of explorers – Lewis & Clark – one peering into the distance with a telescope while the other intently looks toward the same direction with a rifle at the ready. The words ‘Explore – Discover – Know’ are inscribed on the patch which could indicate NROL-76 will be used as a technology demonstration, exploring a future sensor for intelligence gathering craft, potentially making use of new technology or a novel wavelength band not previously used in reconnaissance.

As for the satellite’s orbital destination, a number of scenarios have been presented that fit the launch safety areas issued for this mission: a departure corridor taking Falcon 9 to the north-east into an orbit inclined around 50 degrees and a NOTAM for a large patch of the Indian Ocean south east of South Africa where the second stage of the rocket will re-enter after making a targeted deorbit burn 3+ hours after liftoff.

The case of NROL-76 heading into a Low Earth Orbit has gotten stronger after Ball’s reveal as the satellite’s manufacturer, also taking into account the lofted trajectory to be flown by the Falcon 9 rocket that is indicative of a single-burn mission into Low Earth Orbit. However, safety zones also fit a Molniya Transfer Orbit mission that would leave the satellite in an elliptical orbit peaking around 17,000 Kilometers from where it would have to maneuver into a true Molniya orbit under its own power.

A worldwide community of trackers is ready to spring into action and spot the new satellite in orbit to begin monitoring its moves that could deliver more insight into the craft’s purpose.