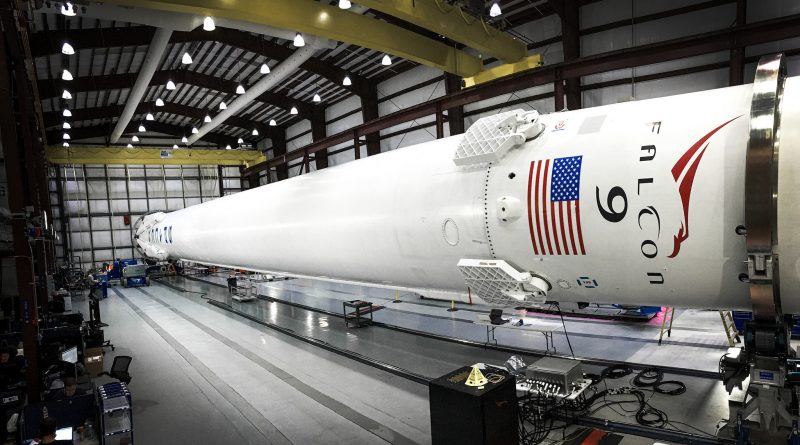 SpaceX cleared their Falcon 9 for liftoff from Cape Canaveral on Wednesday to deliver a pair of communications satellites to Geostationary Transfer Orbit, marking Falcon’s third GTO mission in a row and the third launch in a period of under six weeks.

Falcon 9 is set for liftoff at 14:29 UTC, the opening of a 44-minute launch vehicle. Thundering away from its SLC-40 launch pad, the 70-meter tall rocket will swing to the east-south-east along the standard route to GTO. The first stage and its nine Merlin 1D engines will be in action for a little over two and a half minutes, and the second stage will fire twice, first for six and a half minutes to enter a Parking Orbit and again for a little over a minute to lift its payloads into a highly elliptical orbit.

The first stage of the Falcon 9 will again attempt a landing on the Autonomous Spaceport Drone Ship, waiting 680 Kilometers from the launch site. SpaceX was able to recover three boosters on the three most recent Falcon 9 missions, however, failure remains a distinct possibility due to the extreme re-entry conditions associated with GTO missions.

The satellite platform enables operators to share the cost of a single launch vehicle while sparing the launch operator from integrating dual payloads since the two satellites already come with a built-in adapter developed by Boeing.

SpaceX is generally not inclined to do dual payload missions like its competitor Arianespace due to the fact that problems with one of the co-passengers affect both, the other payload and the launch services provider. The design of the 702SP platform allows SpaceX to treat the mission like a single payload launch since the satellite manufacturer completes all processing of the individual satellites and delivers a one-piece stack for installation on the launch vehicle.

With a combined mass of 4,200 Kilograms, the two spacecraft are aiming for a Supersynchronous Transfer Orbit with a high-point well above the Geostationary Belt.

The satellites purely rely on electrical propulsion systems and therefore need longer to maneuver from their transfer orbit to their respective stations in Geostationary Orbit – 75°E for ABS 2A to deliver services to Asia and Africa, and 116.8°W for Eutelsat 117 West B for coverage of Latin America. Both satellites find their main application in the Direct-to-Home television business.

Eutelsat 117 West B features an all Ku-Band payload covering Andean region, Central America and the Caribbean and a large portion of South America, plus a high-power spot beam is provided for coverage of Mexico. The satellite will deliver video, television and communications services to millions of customers.

Eutelsat 117 West B rides in the upper slot and is separated from the Falcon 9 rocket at T+30 minutes followed five minutes later by its co-passenger ABS 2A.

The Falcon 9 rocket tasked with another high-energy delivery and high-speed return attempt went through its Static Fire Test on Sunday, briefly igniting its nine Merlin 1D engines to provide performance data for reviews. Rolled back into the hangar, Falcon 9 was outfitted with its dual-payload stack and looks forward to an overnight rollout to the launch pad.

The L-1 weather forecast from the 45th Weather Squadron shows an 80% chance of acceptable conditions for Wednesday’s launch window. Southwest flow will delay the development and progression of the East Coast Sea Breeze, creating generally favorable weather conditions, however, there is a slight chance of cumulus clouds developing due to surface heating. Cumulus clouds are the primary concern for the launch attempt since any other significant weather is not expected to develop until much later in the day.

Standing 70 meters tall atop its launch pad at Space Launch Complex 40, a former Titan launch site, the Falcon 9 rocket is powered up several hours ahead of the expected T-0 time to head into its lengthy countdown. With around four hours to liftoff, Air Force Range Controllers will take up station at the Morrell Operations Center to begin monitoring the clearance of the launch corridor.

Once fully checked out, Falcon 9 begins its tanking sequence that – owed to the use of densified propellants – is much more complex than that for previous launchers. The SpaceX Launch Team will go through the poll for a GO/No GO for propellant loading at T-38 minutes followed by the initiation of the Automated Countdown Sequence at T-35 minutes, marking the start of a fast-paced fueling sequence.

The tanks of the two-stage rocket will be chilled down before propellants start flowing, beginning with Kerosene loading at T-34:30 followed by the initiation of LOX flow into the first stage at T-33:30 and the second stage just 19.5 minutes ahead of liftoff.

To make sure propellants inside the tanks are at liftoff mass when clocks hit zero, SpaceX implements a rapid propellant loading sequence, filling the Falcon 9 with over 500 metric tons of LOX and RP-1 in less than half an hour.

In the last hour of the countdown, Falcon 9 receives its updated flight software including the parameters for its landing attempt. The two satellites will be verified to be on internal power and in flight mode before Falcon 9 heads into the business end of the countdown.

At T-10.5 minutes, the Merlin 1D engines on the first stage will begin their chilldown sequence by opening LOX pre and bleed valves to get ready for start, also setting up the TEA-TEB ignition system. The two Strongback cradles will open and the large support structure will retract to its launch position three and a half minutes before blastoff. Liquid Oxygen loading will close out at T-2 minutes and 40 seconds on the first stage and right at the T-2-minute mark on the second stage, coinciding with Falcon 9 going to internal power.

A final Status check with the Launch Director occurs at T-90 seconds and Falcon 9 assumes full control of the countdown at T-1 minute, starting the last steps prior to ignition.

Rising from its pad under the loud thunder of its nine engines, Falcon 9 will climb vertically for around 20 seconds, clearing the tower. The pitch and roll maneuvers start a short time into the flight to allow Falcon 9 to fly to the east-south-east, departing the Space Coast and lighting up the night skies.

Heading uphill, Falcon 9 will break the sound barrier about 70 seconds into the flight and encounter Maximum Dynamic Pressure around 77 seconds after liftoff, throttling down its engines for approximately 20 seconds around MaxQ.

MECO, Main Engine Cutoff, is expected two minutes and 36 seconds into the mission, leaving the first stage with a sufficient reserve in propellant for its adventurous return to Earth. Three seconds after engine shutdown, the pneumatic stage separation system will be initiated to cut the connection between the two stages and push the first stage away to clear the way for the ignition of the MVac engine on the second stage.

Coming to life at T+2:47, the upgraded MVac engine of the second stage will soar to a thrust of 95 metric-ton-force to fire for six minutes and 35 seconds to push the stack into a Parking Orbit. Approaching the end of its burn, the second stage will enable Terminal Guidance Mode to ensure an on-target insertion followed by the deactivation of the Flight Termination System which will no longer be required with the stage at orbital velocity.

As the second stage arrives in orbit, about 200 Kilometers below, in the Atlantic Ocean, the Autonomous Spaceport Drone Ship will be ready to catch a Falcon 9 Booster.

Separating at a high speed well over Mach 6, the first stage will complete an initial maneuver immediately after separation, flying out of the second stage plume and flipping 180 degrees to point the main engines to the direction of travel.

No propellant is available for a braking or boost-back maneuver and the first stage will continue on a ballistic arc until hitting the atmosphere, creating a large downrange travel distance, aiming for the Drone Ship stationed 660 Kilometers from the launch pad.

Next, the booster deploys its four aerodynamic grid fins for atmospheric descent that is preceded by a short 20-second entry burn involving three engines to slow the vehicle down before slamming into the dense atmosphere. With the four grid fins deployed, Falcon 9 is set for one and a half minutes of atmospheric descent during which the fins provide roll, pitch and yaw control. The fins will be used to correct the final cross-track errors as the first stage starts homing in on the exact coordinates of the Drone Ship.

If still in an operational condition after a high-energy re-entry, the first stage will re-start three of its engines that rapidly slow the booster down before the two outer engines shut down to allow the vehicle to descend powered by the center engine alone.

Deploying its landing legs with seconds to spare, the first stage will hopefully master another bulls-eye landing eight and a half minutes after blasting off, aiming to increase SpaceX’s inventory of returned boosters to five. Should the landing succeed, teams will conduct a remote survey of the booster and safe its propellant systems before engineers can return to the ASDS and secure the first stage for its return to shore.

After the first stage arrives back on Earth, the focus will very quickly shift back to the second stage, carrying out the primary mission of lifting Eutelsat/ABS into Geostationary Transfer Orbit. Boosting the stack into a preliminary parking orbit, the second stage will be tasked with a 16.5-minute coast phase so that the second burn could place the high-point of the orbit over the equator, easing the process when transitioning the satellite to a Geostationary Orbit.

The MVac engine is expected to re-start 25 minutes and 54 seconds after liftoff for a burn of 64 seconds to sufficiently raise the apogee of the orbit. It is understood that the two satellites are aiming for a Supersynchronous Transfer Orbit. For reference, the 2015 dual-payload mission targeted an orbit of 410 by 63,950 Kilometers at an inclination of 24.8 degrees.