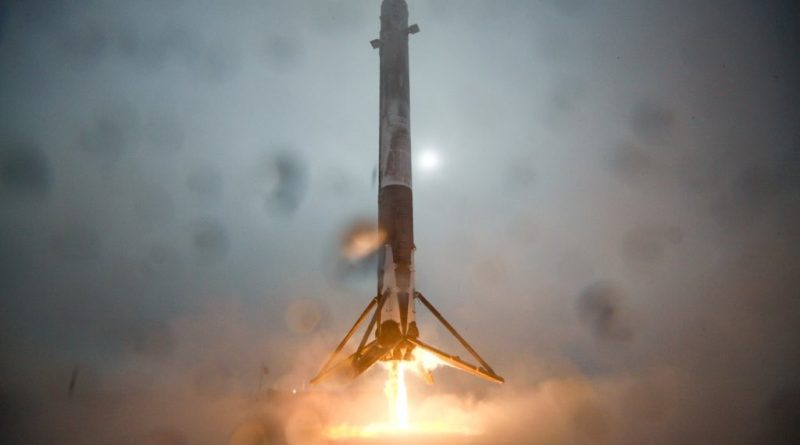 SpaceX was not able to achieve the company’s next milestone on Sunday when their Falcon 9 first stage booster came in hot and made a hard landing in the latest attempt to fly the rocket to the Autonomous Spaceport Drone Ship located in the Pacific Ocean as part of the company’s quest for reusability.

Lifting off from Vandenberg Air Force Base at 18:42 UTC, the Falcon 9 first stage successfully sent the rocket’s second stage on its way to orbit before embarking on its adventurous return journey culminating in a harder-than-planned landing on the floating platform after one of the landing legs failed to latch for touchdown.

With Sunday’s attempted barge landing, SpaceX hoped check off back to back successes in the company’s aspirations of achieving an operational reusability of the Falcon 9 booster – building on last-month’s successful return to land on the East Coast that marked a first in rocketry as never before had a first stage involved in an orbital mission made an intact landing under the power of its engines.

Although Falcon 9 held plenty of leftover performance carrying the light-weight Jason-3 oceanography satellite, SpaceX had to opt for a landing in the Ocean because the rocket is not yet cleared to overfly a wildlife preserve near its landing site at Vandenberg.


Mastering the barge landing is as important as returning cores to land since Falcon 9 missions with less excess in vehicle performance will not be able to fly all the way back to the launch site. The same will be the case for Falcon Heavy core stages as their energy at separation will not permit a return to land and require the drone ship to be placed under the rocket’s trajectory.

Sunday’s launch operation got underway bright and early at California’s Central Coast with Falcon 9 being powered up ten hours ahead of the opening of the day’s 30-second launch window. Following extensive testing on the launcher and the completion of pad close outs, the launch team began the process of loading over 480 metric tons of -183°C Liquid Oxygen and Rocket Propellant-1 into the two stages of Falcon 9 – a two-hour operation that finished inside T-1 hour.

Final preparatory steps and status polls were made to clear Falcon 9 to head into its critical 10-minute countdown auto sequence that saw the pressurization of tanks, the retraction of the strongback and the chilldown of the engines as well as the transfer to Falcon’s computers for ignition. Falcon 9 was on the mark and did not experience any last-minute hold-ups, showing progress over the troubles of hitting the spot in narrow launch windows in the early Falcon missions.

The nine Merlin 1D engines on the first stage ignited, soared up to a collective liftoff thrust of over 600 metric-ton-force and Falcon 9 started rising from its pad at precisely 18:42:18 UTC, embarking on its final mission in the v1.1 configuration, carrying the Jason-3 satellite into an orbit over 1,300 Kilometers in altitude.

Passing T+2 minutes, the second stage started chilling down its MVac engine and the nine Merlin engines on the first stage throttled down to limit stress on the 68.4-meter tall rocket as it approached shutdown. First stage cutoff occurred at approximately two minutes and 34 seconds into the flight with separation of the stages three seconds later at an altitude of 67 Kilometers and a velocity of 6,150 Kilometers per hour, Mach 5.

Being sent on its way after a clean separation, the second stage ignited its MVac engine on an initial six-and-a-half-minute firing to push the stack into an elliptical parking orbit.

While the second stage continued ascending, the first stage booster set sail on the widely watched return journey to continue SpaceX’s quest of perfecting a core landing on the Autonomous Spaceport Drone Ship, considered more complex than a return to shore due to the smaller size of the landing pad, stationkeeping errors of the floating platform and sea swell causing the landing pad’s altitude to vary by up to several meters.

First for the booster was a quick maneuver out of the second stage plume ahead of the flip-around, pointing the nine Merlin 1D engines to the direction of travel to set up for the boost-back – all while still gaining altitude. The attitude control thrusters fed with gaseous nitrogen were put to use for a propellant settling maneuver prior to the boost-back burn which started four and a half minutes into the flight.

The half-minute boost-back utilized a trio of Merlin 1D engines to place the booster on a trajectory to the ASDS, stationed 300 Kilometers south of the launch site. SpaceX was forced to go for a barge landing on this flight because work is still open in an environmental assessment to clear inbound Falcon boosters to fly over a wildlife preserve when heading for a touchdown on the flat concrete pads established at Space Launch Complex 4W.

Real-time calls from the Launch Team confirmed the successful completion of the boost-back with the booster on a descent towards the atmosphere. Coming back from the edge of space, the first stage deployed its four aerodynamic grid-fins for guidance during atmospheric flight – independently actuated in a two-degree of freedom scheme to control the three-axis attitude of the stage.

Passing ~70 Kilometers right at T+7 minutes, the first stage re-started for a re-entry burn of 25 seconds, slowing the vehicle down and also shielding the engine compartment from the extreme entry environment. Upon completion of the entry burn it was up to the grid fins to control the angle of attack of the ~42-meter tall booster in order to manage the downrange travel distance, also flying out any residual cross track errors.

The center engine lit up again eight and a half minutes after launch, set for some heavy throttling to go through the final trajectory adjustments and transition the booster to a gentle vertical descent towards the prominent SpaceX logo in the center of the landing platform. Live video from the Drone Ship showed signs of the first stage approaching but cut out right before touchdown. The last call prior to the loss of communications was that all landing legs had completed deployment by T+9:03.

Touchdown of the stage was reported to be at a good speed, but one of the legs of the booster failed to lock in its deployed position and collapsed after contact with the deck. As a result, the stage tipped over and burst into flames but was not a complete loss as a large portion of the booster remained on the barge.

Managing a gentle descent towards the barge was no small feat given rough sea conditions with waves up to four meters at an average frequency of under 20 seconds.

SpaceX CEO and Chief Designer Elon Musk summarized the difficulty of landing on the Drone Ship in a Tweet: “Definitely harder to land on a ship. Similar to an aircraft carrier vs land: much smaller target area, that’s also translating & rotating.”

Musk continued: “However, that was not what prevented it being good. Touchdown speed was ok, but a leg lockout didn’t latch, so it tipped over after landing.”

Two previous barge landing attempts in 2015 came similarly close, but could not achieve an intact landing due to technical bugs ironed out for subsequent attempts including the successful on-shore landing on the Orbcomm mission in December.

While the first stage made its on-target landing that did not end in success, the Falcon 9 second stage it had sent on its way seven minutes earlier arrived in an elliptical parking orbit of 175 by 1,321 Kilometers, concluding the first burn and heading into a 46-minute coast phase – one of the longest coast phases flown by Falcon 9 on a primary mission.

In its elliptical parking orbit, the stack climbed to apogee for the critical second burn tasked with the circularization of the orbit. The 801-Kilonewton MVac engine restarted just after passing the T+55 minute mark for a short burn of under ten seconds to achieve an orbit close to Jason’s operational orbit of 1,328 by 1,380 Kilometers inclined 66.05 degrees. The achieved orbit was reported to be 1,305 by 1,320 Kilometers at the desired inclination.

Separation of the Jason-3 satellite occurred 56 minutes into the flight (19:38 UTC) heading off on a mission dedicated to the continuation of a two-decade record of ocean topography for a better understanding of global circulation patterns, sea level changes and climate implications as well as operational weather forecasting.

The Falcon 9 upper stage will ignite for a third time to conduct a targeted deorbit burn, setting it on a course to a destructive re-entry over the Pacific after one orbit.

An update on Spacecraft Status will be posted later.