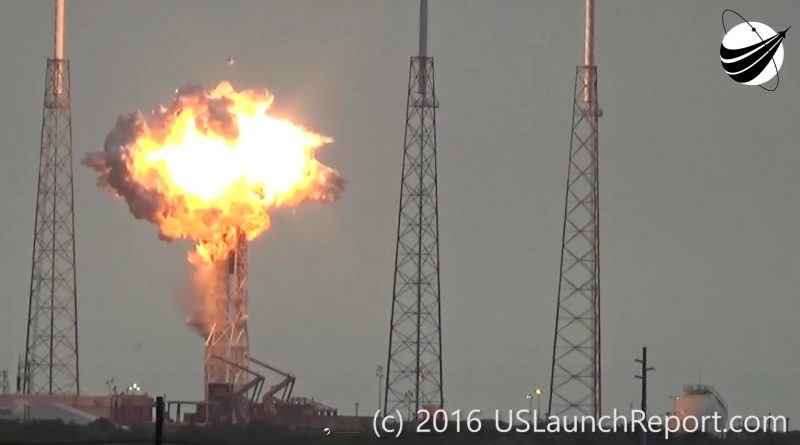 While teams are picking up the pieces left of the Falcon 9 rocket after its dramatic on-pad explosion on Thursday, a relentless effort has gotten underway at SpaceX to trace back the root cause of the mishap that claimed the loss of the $195 million AMOS-6 communications satellite.

SpaceX issued an update late on Friday reporting that the company is forming an Accident Investigation Team to identify the root cause of the failure and develop corrective measures to avoid a future occurrence and make the Falcon 9 launch system safer and more reliable.

The 70-meter Falcon 9 rocket exploded on its SLC-40 launch pad at 9:07 a.m. local time in the final minutes of the countdown to a Static Fire Test – a part of every SpaceX launch campaign since the early Falcon 1 days to act as a final end-to-end test of the rocket and pad systems prior to launch day.

A spectacular video captured by U.S. Launch Report shows a powerful blast originating from around the rocket’s second stage which then collapsed in a blaze of fire, leading to the destruction of the first stage in a second explosion.


The 13-meter long payload fairing with the Israeli satellite inside appeared in remarkable condition – held in place on top of the Strongback structure for several seconds after the collapse of Falcon 9. The fairing eventually plunged ~57 meters to the ground and created another blast when the satellite’s hypergolic propellant tanks were breached.

Per standard procedure, SLC-40 and its surroundings, were cleared prior to loading Falcon 9 with sub-cooled Liquid Oxygen and chilled Rocket Propellant 1. There were no injuries, but SpaceX confirmed that the launch complex incurred damage, though the scale of ground systems damage was not immediately apparent.

The incident occurred around the T-8-minute mark and originated within or around the oxidizer tank of Falcon’s second stage, as seen in the U.S. Launch Report video.

Providing a sense of the speed at which the failure unfolded, SpaceX revealed that the company’s engineers are focusing on a 35 to 55-millisecond period during which the catastrophic failure transpired.

While the footage shot from a distance of 4 Kilometers reveals some key events of Falcon’s fiery demise, the video does not yield any definitive clues as to what caused the blast. SpaceX has much more to work with – a number of close up videos to search for visual clues of anything out of the ordinary, and around 3,000 channels of telemetry from a wealth of sensors to obtain a clear picture of how each and every subsystem behaved. Also available is whatever is left of Falcon 9, permitting some forensic analysis to be carried out on components.

Although SpaceX engineers have plenty to work with, piecing together the exact mechanism that caused the anomaly will likely be a lengthy process.

The investigation into the mishap will be led by SpaceX with oversight by the Federal Aviation Administration which provides the launch certification for Falcon 9 when the time for its return comes. NASA, the U.S. Air Force and other customers will also participate in the investigation, being kept in the loop on SpaceX’s findings and corrective actions before entrusting Falcon 9 with their payloads again.

The timing of the explosion at T-8 minutes is also rather curious. At that point in the countdown, Falcon 9 is not yet armed and help upright with support by the Strongback structure, still using a ground power feed and in the process of being loaded with propellants.

At T-8 minutes, the first stage is in the final minutes of being loaded with RP-1 fuel while the second stage is already full of fuel – as can be seen by the large quantities of Kerosene spilling down from the rocket after the initial blast.

At the time in question, both stages of the rocket are in the midst of their Liquid Oxygen fast-fill sequence with flow rates carefully controlled to finish oxidizer loading right at the T-2 minute point on Stage 2. Also active during this time frame is high-pressure Helium loading on the second stage, filling the Composite Overwrapped Pressure Vessels which are inside the oxidizer tank, submerged in LOX.

At the time the failure occurred, the SpaceX launch team would have been reviewing the readiness for the start of engine chilldown at T-7 minutes and whether a hold would be required ahead of that milestone which marks the start of a fast-paced sequence of events to transition Falcon 9 to its launch configuration. SpaceX did not specify whether there was any prior sign of the impending failure, though the speed of the event would suggest that the launch team, like everyone else in the area, was taken completely by surprise.

One of the biggest open questions is whether the event originated within the second stage or was caused by a faulty Ground Support Equipment component. The U.S. Launch Report video appears to show the epicenter of the initial blast around the area of the bulkhead between the LOX and RP-1 tank with the initial blast on the side of the rocket facing the Strongback, though the video can not reveal whether the destructive event occurred on the outside of the vehicle.

SpaceX did not provide details on the damage sustained by their SLC-40 launch pad, likely because assessments at the site were still in progress. As evident in the U.S. Launch Report video, a powerful fire – fueled by propellants from the rocket – continued for several minutes until a series of secondary explosions occurred, likely involving RP-1 ground storage tanks, adding more fuel to the blaze.

SLC-40 will likely require extensive repairs taking the pad out of commission for a period of months. The Strongback structure which had remained upright after the explosion appeared to be in bad shape, possibly requiring replacement.

SpaceX noted that Launch Complex 39A at the Kennedy Space Center is in the final stages of being outfitted for Falcon 9 and Falcon Heavy missions. Per the current schedule, that pad will be operational in November – Falcon 9 on the other hand may not fly again this year depending on the complexity of the failure investigation and corrective action.

SpaceX is confident that its two pads at LC-39A and SLC-4E at Vandenberg Air Force Base will be sufficient to support the upcoming flight manifest.

The AMOS-6 mission would have been the 29th launch of the Falcon 9, the ninth of the Full Thrust variant and the ninth SpaceX flight of the year. It marks the second operational Falcon 9 to be lost after the June 2015 in-flight anomaly that claimed the loss of the Dragon SpX-7 cargo spacecraft.

For SpaceX, the current focus is on identifying the root cause of the failure and safely returning Falcon 9 to flight – a process that could take a number of months. The company has around 70 missions on its manifest, though it remains to be seen whether all customers will stay with SpaceX through the second long-duration stand-down in launch activities.

If looking for alternatives, operators may quickly run into difficulties placing their satellites on another rocket. Ariane 5, Europe’s workhorse launch vehicle, has a booked manifest through 2017, ULA’s Atlas V is a high-price option and also has a long list of missions already manifested, and the Russian Proton suffers from reliability issues, currently out of commission until at least October/November after engine problems on its most recent mission.

SpaceX had planned a strong closing of 2016 with nine missions on the schedule before the end of the year (including AMOS-6). Six flights were expected from Cape Canaveral and three missions were to launch from Vandenberg.

The impacts of Thursday’s failure on SpaceX’s manifest including the company’s commercial crew development will become clearer in the coming weeks as engineers piece together what happened on Falcon’s Florida launch pad.