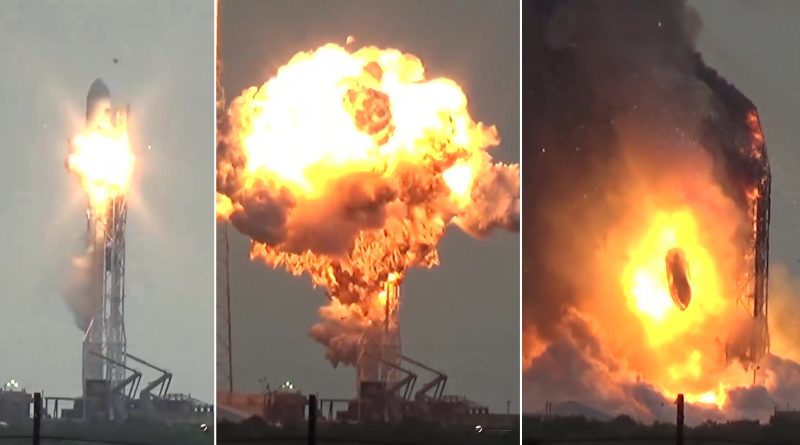 SpaceX suffered a major setback on Thursday when the company’s Falcon 9 rocket exploded atop its Cape Canaveral SLC-40 launch pad during the countdown to what was expected to be a routine Static Fire Test to clear the rocket for a Saturday morning liftoff with the Israeli AMOS-6 satellite.

Both, Falcon 9 and the $195 million AMOS-6 communications satellite were lost in the mishap and the launch pad appeared to suffer considerable damage in the explosion and the fire that followed it. SpaceX reported the anomaly occurred at 9:07 a.m. local time (13:07 UTC), originating around the second stage’s liquid oxygen tank.

There were no injuries and the majority of damage was contained within the SLC-40 pad perimeter.

U.S. Launch Report, an independent video production company, has been providing video of all recent SpaceX activities at Cape Canaveral and again had their cameras pointed to SLC-40 to record video of the Static Fire Test. Their video of the mishap is likely the only high-quality footage of the event that will ever see the light of day.

Although the video does not reveal an obvious cause of the accident, it offers spectacular insights into the progression of the rocket disaster. Below are still frames from the U.S. Launch Report video showing some of the key events of Thursday’s on-pad explosion, which, more accurately put was a deflagration – an extremely fast burning fire as opposed to a detonation, a distinction dependent on the flame front speed.

An interesting observation apparent when scrutinizing the video is the presence of a flame from the very beginning of the event. Typically, when a tank splits open for whatever reason, there is a delay for the fuel and oxidizer to mix and then ignite, provided an ignition source is present (open flame, spark, hot component, electrical or electrostatic arc). The placement of the initial blast as seen in the video would position its origin somewhere near the Stage 2 umbilical attachment, but the angle may be misleading without video from a second perspective.