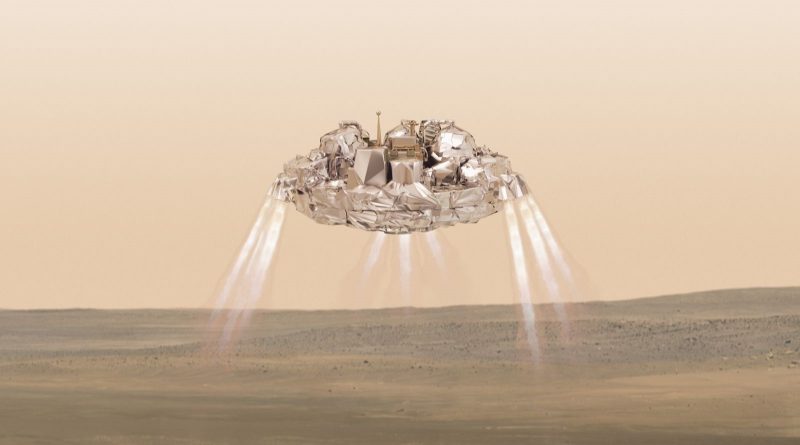 A one-second glitch led to a 3.7-Kilometer free fall for the European Space Agency’s Schiaparelli lander that crashed on Mars back on October 19 when attempting an experimental parachute-and-rocket-assisted landing on the red planet to pave the way for the ExoMars 2020 mission that aims to dispatch a rover to the Martian surface.

Significant progress was made by the European Space Agency, piecing together the chain of events that led up to the lander’s hard impact in the plains of Meridiani Planum. According to the new findings, Schiaparelli’s crash has been traced back to a combination of a transient Inertial Measurement Unit lock-up and faulty software leading the onboard computer to think the vehicle was already on or close to the ground.


Schiaparelli embarked on its adventurous six-minute landing sequence after being shepherded to Mars by the Trace Gas Orbiter following a March 14 liftoff atop a Russian Proton Rocket. Hitting the atmosphere, Schiaparelli – more formally known as the Entry, Descent & Landing Demonstrator Module – was set to first slow down during a blazing entry, deploy a supersonic parachute, fire nine landing engines and finally drop to the surface from only one and a half meters.

Review of a large data set downlinked in real time during the landing maneuver showed that the events of the entry sequence went according to plan and that the AMALIA and COMARS+ experiments collected data which has been passed to scientists to learn about the structure of the Martian atmosphere and study the engineering physics of entry at Mars for future missions.

In a press release issued on Wednesday, the European Space Agency reports that Schiaparelli deployed its supersonic parachute at an altitude of 12 Kilometers and a speed of 1,750 Kilometers per hour – matching the pre-landing prediction of 11km & 1,700km/h very well. Having slowed down under the parachute, Schiaparelli dropped its 2.4-meter heat shield 7.8 Kilometers in altitude, also in line with the prediction of 7km.

With the heat shield gone, the Doppler Radar Altimeter was able to acquire the ground for altitude and speed measurements – first going through a short validation sequence before its measurements were processed as part of the navigation & control algorithm. However, while still descending under the chute, Schiaparelli’s Inertial Measurement Unit suffered a transient saturation event – generating a maximum body rate reading for a period of around one second.

This false reading from the IMU persisted longer than would be expected and, when merged into the navigation algorithm, generated an altitude estimate that was negative, i.e. below ground level. Because the bad IMU data was not rejected, the Guidance, Navigation and Control System assumed Schiaparelli was close to the ground, triggering the separation of the lander from the backshell, firing the engines for only a few seconds and switching into landed mode – powering up the surface payload while actually entering a free fall from 3.7 Kilometers in altitude.

Working with a spacecraft simulator, engineers were able to reproduce the vehicle’s response when inserting the erroneous IMU information into the GNC algorithm.

While clearly representing progress in the investigation into Schiaparelli’s untimely demise, the findings are still far from the whole story needed to pin-point a root cause.

In a first route of inquiry, ESA will have to determine how and why the Inertial Measurement Unit saturated for a duration not foreseen in the fault recognition design of the lander. The IMU used on Schiaparelli incorporates solid-state fiber-optic gyros and MEMS accelerometers operated at 200 measurements per second, meaning the saturation occurred over a large number of measurement cycles. Reasons for saturation on the IMU may be a defect internal to the IMU or an actual excursion of body rates on the vehicle outside the IMU’s specifications.

The second item to be looked at by engineers is why the software could not detect the false reading from the IMU and did not recognize a negative altitude as an erroneous measurement. It also has to be determined whether software testing ahead of the mission was sufficient and how a corner-case scenario such as this could be overlooked.

ESA expects to deliver the full conclusion of the investigation into the landing anomaly in early 2017 when the report of an independent inquiry board will published.

A verdict on whether the second half of the ExoMars project can go ahead will be provided at the ESA Ministerial Conference on December 1/2 when ESA government officials will decide on a three-to-five-year spending plan for the space agency.

ExoMars 2020 needs €400 million to be fully funded – ESA will request an additional €300 million from the member states while raising the remaining funds from within the agency’s existing budget.

The ExoMars project will be one of the biggest topics at the conference and Schiaparelli’s crash may lead to additional questions on whether the investment in the second mission is worthwhile, however, ESA officials were confident they could make the case for the ExoMars mission based on the wealth of highly valuable data delivered by Schiaparelli.

“ExoMars is extremely important for European science and exploration,” said Roberto Battiston, President of Italy’s ASI space agency. “Together with all the participating states in the program, we will work towards the successful completion of the second ExoMars mission.”

Good news have continued to come from the Trace Gas Orbiter following its successful orbital insertion on October 19. TGO is currently in the midst of a pair of science orbits lasting from November 20 through 28 to exercise the pointing of the instruments and the imaging sequences.

At present, the vehicle circles Mars in a highly elongated orbit of 250 by 98,000 Kilometers, taking 4.2 days for one lap around the planet. Ahead for TGO is a lengthy orbital adjustment campaign that combines propulsive maneuvers with aerobraking to achieve a 400-Kilometer circular orbit for science operations to begin in earnest in late 2017.

The Trace Gas Orbiter is outfitted with two European and two Russian instruments – a pair of high-fidelity spectrometer instruments, a high-resolution imaging camera, and a suite of neutron sensors and radiation dosimeters. The two spectrometer instruments are capable of detecting the spectral signatures of trace gases down to a concentration of a few parts per billion, allowing TGO to track changes in the Martian atmosphere, to create high-resolution vertical profiles from the ground to 160 Kilometers in altitude, and to identify possible sources and sinks for atmospheric trace gases.