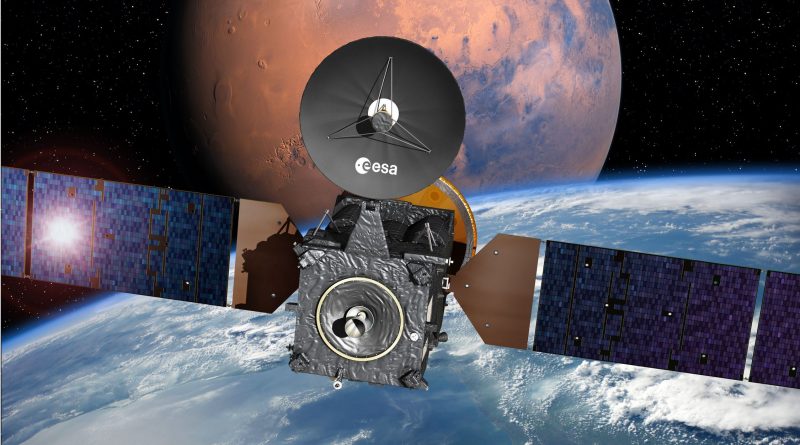 ExoMars 2016 has been sent on its way to Mars on Monday after a day-long ascent mission atop a Proton-M/Briz-M launch vehicle taking the heaviest craft to visit Mars three times around planet Earth before being injected onto its Trans-Martian Trajectory.

Throughout the day, the Mission Team anxiously watched data from the launch vehicle, hoping for a successful insertion of the spacecraft in Proton’s first interplanetary flight in nearly two decades and the very first flight beyond Earth orbit for the Briz-M upper stage.

The multi-billion Euro ExoMars project is a collaboration between the European Space Agency and the Roscosmos State Corporation for a pair of missions – the first in 2016 to fly an orbiter and landing demonstrator to Mars, and the second in 2018 or 2020 to deliver a rover and instrumented lander to the surface to look for signatures of past and present life as the first mission with this explicit goal.


The path to the launch pad for the ExoMars mission was extremely long and not without obstacles. First envisioned in the 1990s as a European rover project, ExoMars entered a firm planning stage when NASA’s Mars Exploration Rovers landed on Mars back in 2004.

Initially starting out as a project between ESA and NASA, the mission went through a number of designs of different orbiter and rover combinations before it became clear that the U.S. could not finance its side of the project. ESA and Roscosmos then partnered up for the two ExoMars missions, also leading to the switch to the Proton rocket.

The ExoMars 2016 mission is comprised of the Trace Gas Orbiter set for a detailed study of the tenuous Martian Atmosphere, and the Schiaparelli lander to demonstrate landing technology for future missions to Mars. With the orbiter at Mars acting as orbital communications terminal, the way will be clear for the 2018/2020 mission featuring an ESA-built rover and a Russian lander for an ambitious surface mission.

The 58-meter tall Proton-M rocket carrying the ExoMars spacecraft lifted off at 9:31:42 UTC on Monday from Site 200/39 at the Baikonur Cosmodrome, quickly disappearing in thick clouds under the loud rumble of its six main engines, pushing the vehicle up the hill with a thrust of 1,014 metric-ton-force.

Proton’s first stage fired for one minute and 59 seconds before handing off to the four engines of the second stage, generating a thrust of 244,600 Kilogram-force to continue accelerating the vehicle on its way to orbit. Staging between the second and third stage took place five and a half minutes into the flight when the vehicle was already 130 Kilometers in altitude, traveling 5.4 Kilometers per second.

The third stage with its powerful main engine and four-chamber vernier was in action for a little over four minutes, lifting the stack with a total thrust of over 60 metric-ton-force. ExoMars was revealed prior to the T+6-minute mark when the protective payload fairing was split open and fell away from the rocket.

It took Proton less than ten minutes to burn 622 metric tons of hypergolic propellants, sending the Orbital Unit on its way nine minutes and 42 seconds after liftoff.

Inserted at a speed of 7.2 Kilometers per second at an altitude around 153 Kilometers, Briz-M and ExoMars were not yet in orbit – requiring Briz-M to make its first burn immediately after separation to give the stack the needed boot to achieve a Parking Orbit.

Briz-M, a versatile upper stage capable of a multitude of mission profiles, was embarking on its very first mission beyond the orbit of Earth. Normally, the upper stage is used to boost communications satellites into Geostationary Transfer Orbits in missions lasting nine to 15 hours – therefore the 11-hour duration of Monday’s flight was no issue for the vehicle.

The Briz-M weighs in at 22,170 Kilograms at launch, standing 2.6 meters tall and measuring 4.1 meters in diameter – sharing the space underneath Proton’s fairing with the spacecraft.

It hosts an S5.98 main engine generating 2,000 Kilogram-force of thrust with the ability of igniting up to eight times. A separate high-pressure propulsion system is used for propellant settling via four thrusters and attitude control, using 12 thrusters.

Briz-M first main engine burn was preceded by the stage acquiring a stable orientation and settling its propellants for ten seconds. Ignition was confirmed 11 minutes and 16 seconds into the flight and Briz-M was to fire for four minutes and 29 seconds, though the upper stage dynamically adjusted its flight profile based on measured insertion errors by the Proton rocket – common practice to ensure an on-target orbital insertion into a circular 175-Kilometer Parking Orbit, inclined 51.5°.

After the successful completion of the first burn, Briz-M headed out over the Pacific, passing between Hokkaido and Honshu as it embarked on its first lap around the planet. Setting up for thee burns, Briz-M was tasked with raising the stack’s velocity by another 4 Kilometers per second to enable ExoMars to depart Earth’s gravitational influence.

Swinging around the planet for the first time, Briz-M re-ignited its engine one hour and 38 minutes after launch on a firing of just over 18 minutes, stretching from the western border of Kazakhstan all the way across Mongolia, China and South Korea before heading out over the ocean again. This burn aimed for an orbit of 270 x 5,800 Kilometers and was performed very accurately, allowing Briz-M to settle down for another full orbit of coasting.

Passing the high-point of its Preliminary Orbit, Briz-M was inbound again, re-starting the S5.98 engine three hours and 52 minutes after launch for a burn of 14.5 minutes to achieve a highly elliptical orbit.

The third main engine burn began while the vehicle was over the Atlantic and took the stack across Europe – flying over Portugal, Spain, France, Germany, the Czech Republic, Poland, the Ukraine and Russia, lasting until Briz-M was over central Kazakhstan, from where it had launched four hours earlier.

A minute after shutting down its engine, the upper stage separated its Auxiliary Propellant Tank that had carried over 14 metric tons of propellant expended during the first three firings of the main engine. To shed unnecessary dead weight, the APT has been designed to separate once empty with Briz-M pulling away from the spent tank using its four settling thrusters.

The separated propellant tank was tracked in an orbit of 696 by 21,086 Kilometers at an inclination of 51.6 degrees – confirming a good post-burn orbit for the mission. Next up was the big nail-biter – a six-hour coast phase to allow Briz-M to fly through its highly elliptical orbit, taking a tour through Earth’s radiation belts.

Making its final close pass of the planet, Briz-M re-started its engine at 19:47 UTC, ten hours and 19 minutes after liftoff, for a boost of 12 minutes and 30 seconds. The Trans-Martian Injection maneuver began when the vehicle was flying over the Great Lakes, heading over Canada and all the way across the Atlantic Ocean for shutdown over North Africa.

A good burn was swiftly confirmed based on reading’s from Briz-M’s navigation sensors and the upper stage began preparing for the big finale of its mission – the separation of the ExoMars spacecraft.

The 4,332-Kilogram ExoMars probe was sent on its way ten hours and 41 minutes after liftoff, after a seemingly flawless mission of Proton and Briz-M.

But the long wait for the Mission Control Team at the European Space Operations Center was not over at that point because ExoMars was programmed to autonomously step through its initial post-separation sequence without anyone watching. This was due to power limitations – the spacecraft had to wait until entering daylight to power-up its transmitter.

In the minutes after separation, ExoMars successfully stabilized its orientation, guided by its Inertial Measurement Units and later by the sun sensors with its thrusters pulsing to place the vehicle into a spin-stabilized sun-pointing attitude. Next was the deployment of the two power-generating solar arrays, bringing the spacecraft’s span from tip to tip to 17.5 meters.

The long-awaited first signal from ExoMars was received by the 2-meter dish at the Malindi Ground Station in Kenya right on time at 21:28 UTC – confirming that ExoMars was healthy after its trip into space. Controllers at ESOC quickly performed a review of telemetry, showing all systems in a healthy state and the battery being charged by the arrays.

The two-meter Malindi antenna was used given the spacecraft’s proximity to Earth and the antenna’s wide field of view, not requiring precise trajectory information for acquisition of signal.

Later in the night, the 15-meter antennas at Maspalomas, Spain and Kourou, French Guiana will start tracking – relaying communications with the spacecraft, but also measuring its trajectory to confirm ExoMars is on a good departure path which will take several hours to confirm.

The seven-month journey of the ExoMars spacecraft will first take the vehicle through detailed testing operations, powering up and checking out the instruments, before a major Deep Space Maneuver occurs around July 28 to set ExoMars on its final course towards Mars.

Several smaller trajectory corrections will be made to set the stage for the separation of the Schiaparelli lander on October 16 followed three days later by the big day – Mars Orbit Insertion for the Trace Gas Orbiter and landing for Schiaparelli – two critical maneuvers representing the final hurdles before the mission can begin delivering unprecedented science data from our neighbor planet in the Solar System.