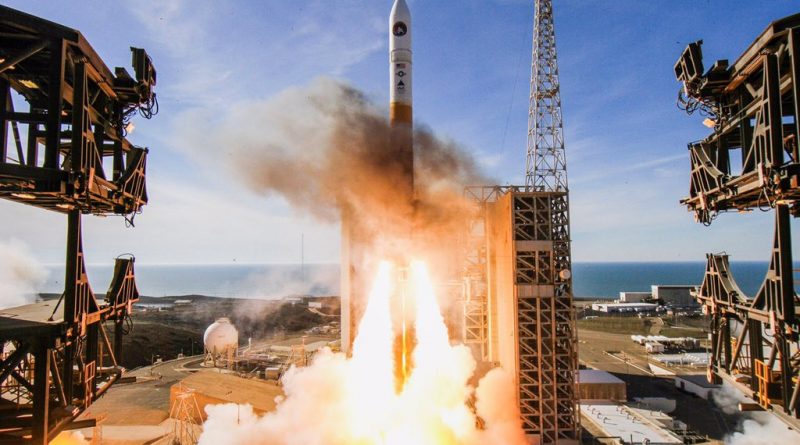 A United Launch Alliance Delta IV rocket thundered off from California’s Vandenberg Air Force Base Friday afternoon on classified government business, lifting the secret NROL-47 satellite for the U.S. National Reconnaissance Office to replenish the U.S. spy satellite fleet. Flexing its muscles, Delta IV fired up the most-powerful hydrogen-fueled engine in the world and was assisted by a pair of solid rockets when blasting off at 2:11 p.m. local time at California’s central coast, 22:11 UTC.

The 66-meter tall Delta IV rocket roared into clear skies as it swung onto a south-westerly ascent trajectory to boost its hush-hush passenger – likely the fifth Topaz radar reconnaissance satellite – into a unique backwards orbit. Coverage of the mission ended just over three minutes into the rocket’s climb when the typical News Blackout of National Reconnaissance Office missions took effect to allow NROL-47 to reach its classified orbital destination out of public sight.

Confirmation of launch success was provided by United Launch Alliance two hours and 20 minutes after liftoff when the satellite had separated from the Delta IV upper stage and began its classified mission.


Keeping with the theme of classified spaceflight dealings, Friday’s mission was the second secret launch in under a week, coming on the heels of Sunday’s SpaceX Falcon 9 mission with the mysterious Zuma spacecraft that is still a point of public focus amid reports of the mission failing within hours of launch. While the veil of secrecy surrounding Zuma apparently outlived the spacecraft’s existence, the case of NROL-47 is vastly different since its identity can be pin-pointed with fair certainty before it even reaches orbit.

Although the NRO, as the operator of all U.S. reconnaissance satellites, goes through great lengths to keep its activities and the identity of its satellites secret, long-running programs are often revealed through information leaks and satellites can be identified by the capabilities of their specific launch vehicles, clues found in their mission insignia and orbital activities scrutinized by a worldwide community of satellite trackers.


NROL-47 is revealed through its unique retrograde – or ‘backwards’ – orbit indicated by the launch hazard area for Friday’s launch. Since only one NRO Program operates in this type of >100-degree orbit, it is reasonable to conclude that NROL-47 is the fifth Topaz radar satellite. Other elements backing this theory include the use of the Delta IV M+(5,2) rocket that has flown exclusively with Topaz satellites and was making its last flight on Friday.

Development of radar reconnaissance satellites started in the U.S. around the mid-to-late 70s and the Lacrosse Program, also known under the code name Onyx, launched five satellites between 1988 and 2005 – one aboard the Space Shuttle and the remaining four on Titan IV rockets. Lacrosse satellites operated in two different orbital regimes, inclined 57 and 68 degrees, and the last Lacrosse, launched in April 2005, remains in operation as of NROL-47’s launch.

Topaz finds its origin in the Future Imagery Architecture – a program initiated in 1999 to consolidate the NRO’s optical and radar programs. However, the optical component of the program ran so hopelessly over schedule and budget that the program was terminated in favor of the existing Keyhole imaging satellites while the radar component, also plagued by technical difficulties, continued toward launch. The first FIA Radar satellite launched as NROL-41 atop an Atlas V 501 in 2010, several years behind the original schedule. It was followed by NROL-25 and 39 that launched on Delta IV and Atlas V in 2012 and 2013 and the fourth satellite was orbited in 2016 as NROL-45 by a Delta IV.


Budget documents leaked by whistleblower Edward Snowden show that one more Topaz satellite was set to be launched in 2017 before the program transitions to more advanced Block II satellites – fitting with the overall theory for NROL-47 as its launch was pushed from 2017 due to additional technical reviews related to Delta’s Common Avionics System.

Orbital data collected by amateur satellite trackers show the four Topaz satellites in orbits of 1,100 by 1,105 Kilometers at an inclination of 123 degrees with a separation of roughly 90 degrees in right ascension between the four constellation planes. NROL-47 – if its launch azimuth is an indication – will differ from this pattern:

Broadcast warnings issued for Friday’s launch to identify the areas where the rocket’s boosters, fairing and first stage will fall clearly differ from those of the previous Topaz launches and point to a launch azimuth of 200 degrees instead of a 220° azimuth flown by its four predecessors. This would point to an orbital inclination around 109° for NROL-47 vs. 123° for the rest of the Topaz satellites. To reconcile the launch azimuth with the given second stage re-entry area for Friday’s launch, an orbital altitude around 400 Kilometers above the existing Topaz constellation is indicated.

The motivation behind moving Topaz-5 into a different orbit may be to expand the constellation’s latitude coverage similar to what was done for the Lacrosse predecessor program with its 57° and 68° planes. The 123-degree retrograde orbit covers latitudes from 57°S to 57°N while a 109° orbit would range between 71°S and 71°N – this would allow the four Topaz satellites at 123° to continue in their role for rapid revisit data collection while Topaz-5 ensures what was visible to Lacrosse will remain within reach for Topaz.

The change in orbit may also be motivated by a desire to exploit peculiar harmonics arising from Earth’s geopotential that can influence the progression of orbital eccentricity and inclination over time. Nevertheless, despite the different orbit, there is almost full certainty that NROL-47 is a radar satellite belonging to Topaz; its role within the constellation will become evident once satellite trackers can identify its exact orbit.

Receiving 229,200 Kilograms of -183°C Liquid Oxygen oxidizer and -253°C Liquid Hydrogen fuel, Delta IV stood fully fueled when the mission’s liftoff time had to be shifted more than one hour into the four-hour launch window as a Red Team had to be sent to the SLC-6 launch pad to deal with a faulty valve configuration on a Helium pumping station.

Getting back on track, the Launch Team put the Delta IV launch vehicle through a last set of checkouts and the countdown entered its automated phase at T-4 minutes to take the vehicle into pressurization, switch it to battery power and hand control over to the new INCA flight control assembly prior to ignition of the 3,137-Kilonewton RS-68A engine.

Upon ignition of the twin boosters, Delta IV jumped off its launch pad at precisely 22:11:00 UTC on Friday, January 12. Powering uphill with a total thrust of 470 metric-ton-force, Delta IV swung to the south-west, having to fight its way into orbit and make up for the eastward rotation of the Earth normally taken advantage of when launching satellites into prograde orbits.

Burning through 1,500 Kilograms of propellants per second, Delta IV pushed through the speed of sound 49 seconds after liftoff followed by Maximum Dynamic Pressure seven seconds later. The twin boosters, each consuming 30 metric tons of propellant, burned out one minute and 31 seconds into the mission with separation occurring three seconds later.

Stage separation was to be completed right around the T+4 minute mark as the Common Booster Core departed the vehicle and the DCSS deployed the RL-10B nozzle extension before lighting the engine for an initial burn. Delivering 11,200 Kilogram-force of thrust, the RL-10B engine successfully pushed the stack into an elliptical Parking Orbit with a burn of over 12 minutes to get set for a coast of half an orbit to climb all the way up to apogee.

The second burn of the second stage, likely only 15 seconds in duration, is tasked with circularizing the orbit for spacecraft separation around 90 minutes after launch with an official confirmation of launch success expected to be forthcoming from ULA some time thereafter.

The second stage was set for a third burn of its engine to drop itself out of orbit to head for a destructive re-entry and splashdown of any surviving components in the Indian Ocean, south of Madagascar, around three hours after launch.

Friday’s launch was the 36th flight for the Delta IV rocket and the 379th mission of a vehicle named Delta, going back to the beginnings of U.S. space flight in 1960.