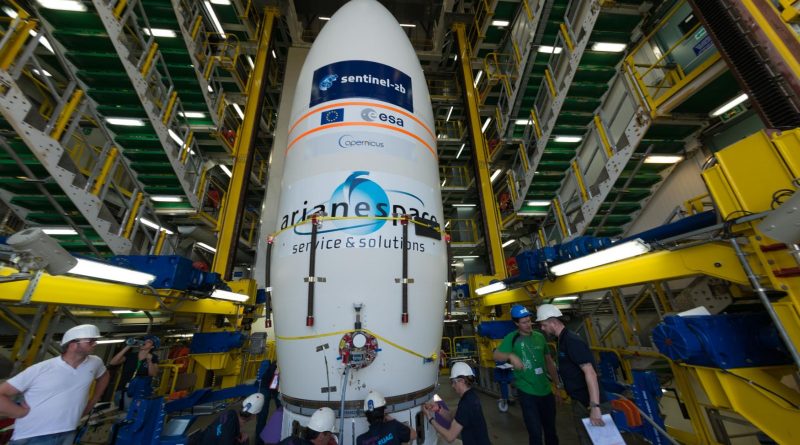 Europe’s Copernicus Earth Observation Constellation will welcome its newest member Monday night when the Sentinel-2B satellite blasts off from the Guiana Space Center atop a Vega Rocket, blazing into orbit to cut in half the revisit time for multispectral images delivered by Copernicus.

Liftoff from the ZLV launch site is set for 1:49:24 UTC to enable Sentinel-2B to enter a precise position within the existing constellation, targeting release into orbit 57 minutes after launch.

Sentinel-2B is the fifth satellite taking flight under the framework of Copernicus – a program designed to provide independent access to relevant Earth observation parameters. Copernicus collects a complete set of Earth observation parameters by deploying a series of satellites to orbit, outfitted with a range of instruments including optical imagers, multispectral payloads, radars, microwave instruments and spectrometers.


The Copernicus Program’s global surveys will be used by policy-makers, maritime operators, scientists, meteorologists and resource managers. Taking the pulse of an ever-changing planet, the operational Copernicus satellite constellation is expected to finish deployment by the early 2020s.

To date, Copernicus launched a pair of radar-imaging satellites, designated Sentinel-1, to collect all-weather, round-the-clock imagery at high resolution, Sentinel-2A tasked with the collection of high-resolution imagery in 13 spectral bands, and Sentinel-3A, regarded as the most comprehensive in the program carrying a variety of sensors for visible, radar and microwave detection over land and sea. Sentinel-2B is the twin to Sentinel-2A and the two will enter orbits phased by 180° for the best possible revisit geometry for image collection on a global scale.

Sentinel-2A lifted off on June 23, 2015, also using the Vega rocket, and has since delivered a wealth of data that is useful in a large number of areas. The Sentinel-2 craft were built by Airbus Defense and Space and have a launch mass of 1,130 Kilograms, hosting a single instrument known as the Multispectral Imaging Payload MSI that acquires optical images of the entire land mass of Earth in thirteen channels in the Visible/Near-Infrared and Shortwave Infrared wavelength range. Resolution of imagery delivered by the satellite will vary from 10 to 60 meters depending on the selected wavelength channel between 0.4 and 2.4 micrometers.

Sentinel-2B completed a transcontinental flight in the first week of January to be shipped from Europe to its equatorial launch base to undergo final launch preparations. Over the course of several weeks, Sentinel-2B underwent a final checkout sequence, received 24 Kilograms of propellant and was installed atop its Vega payload adapter before being encapsulated in the protective payload fairing. Out at the ZLV launch site, the four-stage Vega rocket took shape in the second half of January into early February as the three large solid-fueled stages were stacked and the small AVUM fourth stage was added in preparation for installation of Sentinel-2B.

Hoisted atop the rocket on February 20, Sentinel-2B underwent a last set of preparatory steps including mission rehearsals in coordination with the Vega rocket. The Launch Readiness Review on Saturday confirmed all was in order aboard the launcher, verified readiness of the satellite and ensured all tracking stations are ready for Vega’s ninth mission, the sixth to a Sun Synchronous Orbit.

The 30-meter tall Vega enters countdown operations nine hours before the instantaneous launch window, kicking off the day’s operation with the activation of various systems while engineers at the launch pad finish close outs of the rocket and the facility. As an all-solid launcher with an upper module fueled by storable propellants, Vega’s countdown does not include any dynamic events such as propellant loading.

The Multi-Function Unit, controlling all aspects of Vega’s mission, will be powered up at the T-6-hour mark to complete pre-flight checks, followed by the activation of the Inertial Reference System and the communications system for an initial round of checks while Vega is still hidden inside its Mobile Service Gantry. Flight Computer checks will commence before the Service Gantry is retracted at T-3 hours and 15 minutes, taking around 45 minutes to reach its launch position.

Navigation System and RF Link Checks will be repeated once the gantry is out of the way followed by the re-activation of all systems to reach a readiness point for the Synchronized Sequence at T-50 minutes – leaving plenty of margin in case of open tasks.

Provided all stations are GREEN and the satellite is ready, the countdown will enter its Synchronized Sequence – a highly choreographed procedure that includes the final steps that are necessary to configure Vega for liftoff. During these final four minutes, the launcher transfers to battery power, as does the Flight Termination System that is armed for launch around T-3 minutes. Vega will complete a Thrust Vector Control check of its first stage and the Flight Control System will transition to launch mode before Vega is handed control of the countdown in the final seconds leading to blastoff.

Upon ignition of its P80 first stage, Vega will literally jump off the ground – generating a total thrust of 280,000 Kilogram-force to lift the 137-metric-ton vehicle. Seconds after lifting off, Vega will pitch over to begin flying to the north, aiming for a Sun Synchronous Insertion.

The 11.2-meter long first stage will burn over 88 metric tons of solid propellant in just 110 seconds, accelerating the rocket to a speed of 1.8 Kilometers per second. Burnout on the first stage is sensed by the declining chamber pressure, triggering the pyrotechnic stage separation sequence at T+1:55 to set up for the ignition of the second stage, designated Zefiro-23.

Separation of the 8.4-meter second stage is expected three minutes and 39 seconds into the mission, around 120 Kilometers in altitude at a velocity of close to four Kilometers per second. The third stage, called Zefiro-9, will fire up 12 seconds after staging, beginning a burn of 120 seconds with an average thrust of 23 metric ton-force.

The protective payload fairing will split open and separate three minutes and 56 seconds into the flight when Vega will be well on its way out of the dense layers of the atmosphere. Stage 3 accelerates the vehicle to 7.5 Kilometers per second and separates six minutes and 32 seconds after launch. At that point, the AVUM – Attitude and Vernier Upper Module – assumes control of the flight, first tasked with stabilizing its orientation before coasting uphill for a little under two minutes.

The AVUM will ignite its Ukrainian RD-869 engine at T+8 minutes and 23 seconds on a burn of just over seven minutes to push the stack into orbit with a thrust of 250 Kilogram-force. Arriving in an elliptical Parking Orbit, the stack will have to coast so that the second AVUM burn, set for T+55 minutes, can deliver the stack into a circular orbit.

The two-minute firing of the upper stage aims for a circular orbit 786 Kilometers in altitude, inclined 98.57 degrees. Sentinel-2B will be sent on its way less than one minute after engine shutdown, tasked with stabilizing its attitude, deploying its three-panel solar array and initiating communications with the ground. The satellite will then head into three days of Launch and Early Orbit Operations filled with systems checks and activations to transition the newly launched craft into a stable configuration for a multi-month commissioning sequence.

Also part of Sentinel-2B’s early mission phase is an orbit raising campaign. Not to endanger the operational Sentinel-2 twin, the new addition is launched into an initial orbit 11km below the operational orbit, requiring a series of orbit raising maneuvers to reach the correct orbit and the proper phasing with the 2A satellite.

For the AVUM upper stage, the mission will end with a targeted deorbit maneuver one hour and 48 minutes into the mission to remove itself from orbit.