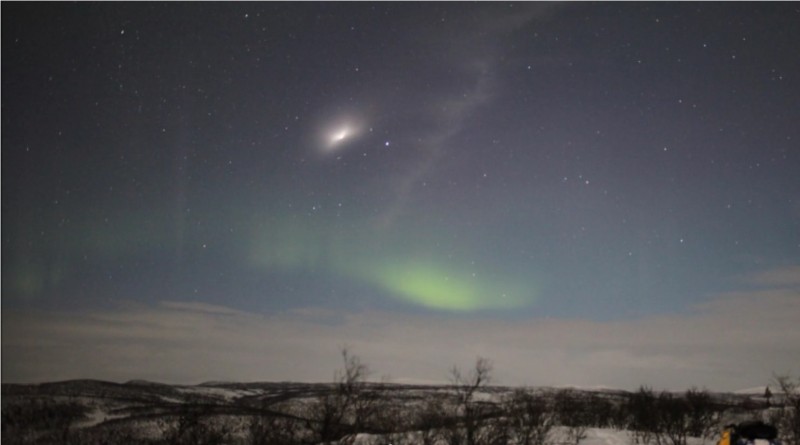 Europe’s latest addition to the Copernicus Earth Observation Satellite Constellation is taking its first steps in orbit after receiving a smooth ride on Tuesday atop a Russian booster. The Sentinel-3A satellite was delivered to an on-target orbit by the Rockot launch vehicle and successfully initiated orbital operations under the watchful eyes of controllers at the European Space Operations Center.

The 29-meter tall Rockot booster lifted off from the Plesetsk Cosmodrome at 17:57 UTC on Tuesday, ejecting itself out of an above-ground launch container using a cluster of four engines. Ascending with a thrust of 191 metric-ton force, the converted Intercontinental Ballistic Missile quickly passed the speed of sound, flying to the north-west to head into a polar orbit.

The first stage fired its four engines for just over two minutes before handing off to the second stage to push the stack into a sub-orbital trajectory with a thrust of 26,000 Kilogram-force in a burn lasting exactly three minutes. On its way uphill, Rockot separated its protective fairing, revealing the 1,200-Kilogram Sentinel-3A satellite.


The Briz-KM Upper Stage separated from Rockot five minutes and 19 seconds and first performed a burn of just over nine minutes to lift the stack into an elliptical transfer orbit for a one-hour coast up to apogee so that the second burn could circularize the orbit. Briz-KM re-started its S5.98 engine one hour and 15 minutes into the flight, burning for 32.39 seconds to raise the perigee.

Sentinel-3A aimed for an insertion orbit of 801 by 817 Kilometers at an inclination of 98.46 degrees. Separation of the satellite was confirmed when Sentinel-3A checked in with the Kiruna Ground Station in Sweden, sending back data indicating it had gotten a smooth ride atop the Rockot.

Later on Tuesday, tracking data was released by the Joint Space Operations Center showing the Sentinel-3A satellite very close to its intended orbit and the Briz-KM in its disposal orbit after a pair of deorbit maneuvers:

The launch of Sentinel-3A was seen from multiple angles with observers in place along to rocket’s polar ground track.

A spectacular view from Finland shows the ascending launch vehicle along with a star-filled sky and a beautiful display of the Aurora Borealis as a backdrop. The short video clip shows the Briz-KM upper stage surrounded by a bright cloud of expanding exhaust in the midst of its first burn to push the stack into orbit. Trailing the bright Briz-KM is the second stage of the Rockot launch vehicle appearing as a small object traversing the sky in a sub-orbital trajectory, en-route to its destructive re-entry.

A video posted to YouTube shows the re-entry of the second stage of the Rockot launcher as seen over Greenland, near Thule. Although the video only provides a zoomed-out view of the event, the fiery re-entry is clearly visible, also showing a smoke trail left behind by the 3.9-meter long second stage. The visible portion of the re-entry in the partly-cloudy skies lasted for about 12 seconds.

Rockot’s second stage remained on a sub-orbital trajectory, releasing the Briz-KM upper stage at an altitude of 242 Kilometers and a speed of 5.7 Kilometers per second. Any surviving components of the 1,500-Kilogram rocket stage were expected to impact 3,865 Kilometers from the Plesetsk launch site.

Arriving in orbit, the Sentinel-3A satellite was released at precisely 19:17:22.905 UTC and the spacecraft made first contact with the Kiruna Ground Station 92 minutes after liftoff.

Attitude Control on the spacecraft appeared very good and Sentinel-3A quickly reached a stable enough posture for the deployment of its single power-generating solar array. The team at ESOC spent the overnight hours powering up the various subsystems of the satellite and went through detailed checkouts to kick off a three-day Launch and Early Orbit Phase that prepares the spacecraft for commissioning activities.

The Sentinel-3A satellite joins the Sentinel-1A radar satellite and Sentinel-2 multi-spectral imaging craft that launch atop Soyuz and Vega boosters in 2014 and 2015. In contrast to the Sentinel 1 and 2 satellites that each carry only one specialized instrument, Sentinel-3A hosts a package of four instruments to collect a variety of data and is therefore considered the most comprehensive Sentinel satellite launched to date.