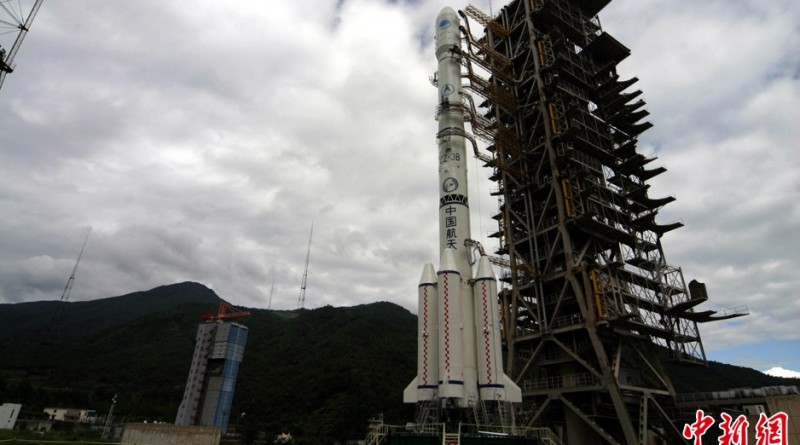 Update: Long March 3B lifted off on time at 16:16 UTC, marking the start of an ascent mission of a little under half an hour. Confirmation of mission success by Chinese officials will be reported when available.

A Chinese Long March 3B rocket is set for liftoff from the Xichang Satellite Launch Center at around 16:16 UTC on Friday, past midnight on Saturday local time, embarking on a mission to deliver the APStar-9 satellite to Geostationary Transfer Orbit.

APStar-9 is the first Chinese-built satellite to enter the fleet of communications provider APT Satellite Company Ltd. Weighing in at around five metric tons, the satellite is based on the DFH-4 satellite platform built by the China Academy of Spaceflight Technology. It is outfitted with 32 C-Band and 14 Ku-Band transponders designed to deliver video broadcasting, VSAT services, mobile data services for planes and sea-going vessels, and Direct-to-Home television broadcasting. Built under a $211 million contract, APStar-9 will replace the APStar-9A satellite launched in 1998 at the 142°E position in Geostationary Orbit.

Set for liftoff from Xichang, the 56.3-meter tall Long March 3B/E will begin heading to the south-east, sticking to a standard mission profile taking the satellite to a Geostationary Transfer Orbit. Blasting off with a thrust of 604 metric-ton force, the CZ-3B/E will fire its four boosters for the first 140 seconds of the flight before they would separate from the vehicle that would continue onward powered by its Core Stage for another 18 seconds before the second stage cuts in for a burn of exactly three minutes. The cryogenic third stage will be tasked with two burns, the first just under five minutes in duration to boost the stack to a Low Earth Parking Orbit, and the second taking place when the vehicle passes the equator to position the apogee of the orbit above the equator. Separation of the APStar-9 satellite is expected around 26 minutes after liftoff with confirmation of launch success coming forward shortly thereafter.

A detailed launch recap will be posted when Chinese officials confirm the success of the mission.