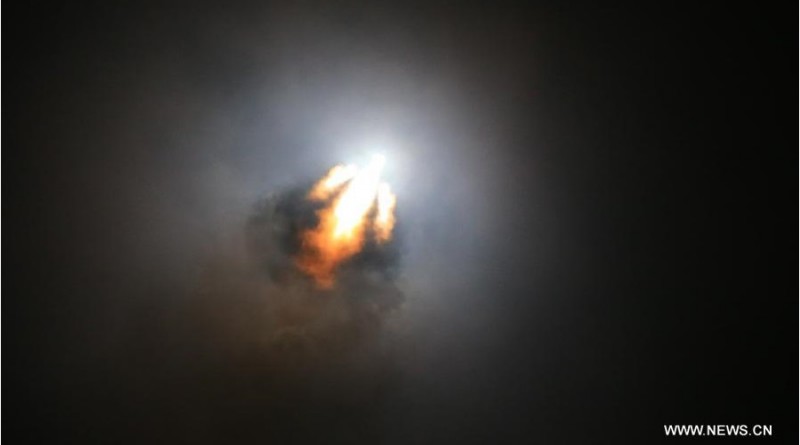 Blasting off from China’s Sichuan Province, Long March 3B headed uphill under the loud thunder of its four boosters and core stage delivering a total thrust of over 600 metric ton-force. Coming just after midnight local time, the launch was accompanied by the usual reports of Earthquakes from the area as the rocket thundered to the south-east for a pass over the Chinese mainland, and the island of Taiwan before heading out over the Pacific.

Conducting a standard ascent mission to GTO, the Long March rocket fired its third stage twice for spacecraft separation approximately 26 minutes into the flight. Confirmation of launch success was provided by Chinese space officials shortly after the successful separation of the satellite occurred.

The contract for the APStar-9 satellite was signed in November 2013 as the first APT Satellite Company mission contracted to a Chinese satellite builder and launch provider. Valued at $211 million, the contract specified an October 2015 launch target, leaving less than two years for the construction of the satellite platform, the integration of the communications payload and pre-launch testing to be conducted. The satellite entered construction in October 2014 followed by the integration of the communications payload and the beginning of end-to-end testing in early 2015.


The satellite arrived at the launch site on August 27 for final processing, propellant loading and integration with the launch vehicle that had been assembled in the weeks leading up to Friday’s midnight liftoff. The launch processing team was deployed to Xichang in the second half of September, in charge of the final preparations of the launch vehicle and facility for this mission that, according to Chinese reports, will be followed in close succession by the next Long March 3B mission involving a Chinese military communications satellite.

The APStar-9 satellite has a launch mass of around five metric tons and is based on the DFH-4 satellite platform supplied by the Chinese Academy of Spaceflight Technology. DFH-4 can accommodate payloads of up to 590 Kilograms, supporting high-performance multi-band communications payloads with a total end-of-life power of 10.5kW delivered by two six-meter solar arrays. The satellite uses state of the art systems to hold its position in Geostationary Orbit with precise three-axis attitude sensing and actuation.

APStar-9 hosts 32 C-Band and 14 Ku-Band transponders. The C-Band payload generates one large beam covering the Asia-Pacific region plus one enhanced beam focused on South East Asia to facilitate video broadcasting, VSAT services and cellular backhaul. The Ku-Band system will deliver coverage to the West Pacific and eastern Indian Ocean with coverage stretching from Japan to Australia and as far east as India and Sri Lanka. The Ku system provides Direct-to-Home Television, VSAT services, mobile communications and telecommunications connectivity to sea-going vessels and airplanes.

Counting down, the rocket activated its guidance systems and underwent the last steps leading up to ignition, notably the transfer to internal power and the pressurization of all tanks.

At 16:16:00 UTC, Long March 3B/E ignited its boosters and core stage that soared to a collective liftoff thrust of 604 metric-ton-force. Thundering off, the rocket rose from its pad, lighting up the night skies over the Xichang launch base in the Sichuan province in south-western China. After a vertical ascent of a few seconds, the rocket began to pitch and roll onto its planned ascent path, taking it south-east across China before passing over the Pacific Ocean.

With all engines firing at full throttle, Long March 3B/E burned 2,350 Kilograms of propellant per second as it started racing uphill and making its way downrange, passing Mach 1 and encountering Maximum Aerodynamic Pressure after passing the one-minute mark. Each of the four boosters delivered 75,500 Kilogram-force of additional thrust to the vehicle using a single DaFY-5-1 engine. The boosters consumed their propellant load of 41,200kg, each, over the course of a burn of 140 seconds. All four boosters shut down as planned and separated from the Core Stage using pyrotechnic separation mechanisms and small retrorockets to ensure a clean separation.

While the second stage was firing, Long March 3B departed the dense atmosphere, making it safe to jettison the protective payload fairing and expose the APStar-9 satellite for the rest of its ride uphill.

Separation of the APStar-9 satellite was expected just after T+26 minutes and was declared a success by Chinese officials. The achieved orbit was given as 212 by 41,965 Kilometers.

In the coming days and weeks, the satellite will complete its transfer to Geostationary Orbit and take up station at 142 degrees East where it will complete in-orbit testing and commissioning before entering operational service for a mission of at least 15 years.