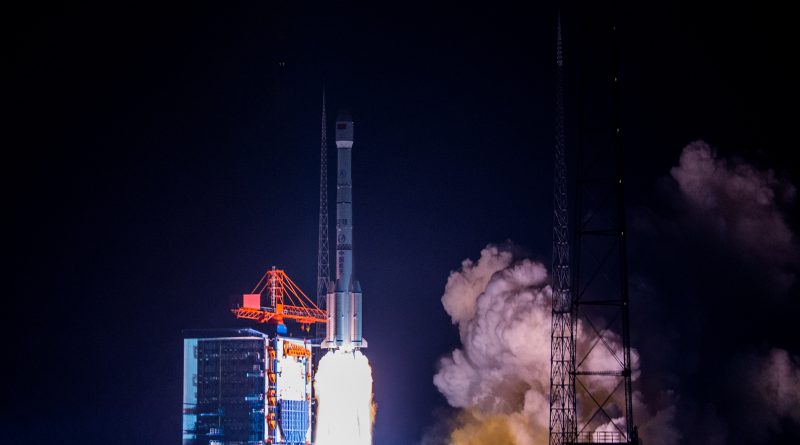 The launch of China’s Zhongxing-9A communications satellite atop a Long March 3B rocket did not reach its planned orbital destination on Sunday, Chinese state media confirmed after several hours of silence following the midnight hour liftoff from the Xichang launch base.

China’s official press agency Xinhua reported Monday morning that the Zhongxing-9A satellite “failed to enter the preset orbit” and that the exact reason for the failure is under investigation. Orbital data provided by the U.S. Joint Space Operations Center on Monday shows the satellite in a significantly lower orbit than would be expected for a Geostationary Transfer Mission.

The three-stage Long March 3B rocket lifted off from the Xichang Satellite Launch Center at 16:11 UTC on Sunday, shortly after midnight local time, on what was expected to be another routine haul into Geostationary Transfer Orbit. Powered by its hypergolic-fueled core stage and four boosters, the 56-meter tall rocket swung to the south east to first overfly the Chinese mainland before heading out over the Pacific Ocean on the standard route to GTO out of China.


Based on the information available on Monday, the flight proceeded as planned through the rocket’s lower stages that consume a self-igniting mix of Unsymmetrical Dimethylhydrazine and Nitrogen Tetroxide with the boosters dropping away two minutes and 20 seconds into the mission followed 18 seconds later by the core stage to hand off to the also hypergolic-fueled second stage for a three-minute firing.

According to space officials, trouble struck at some point during operation of the rocket’s cryogenic third stage that was tasked with a pair of firings – first to inject the stack into a 190-Kilometer Parking Orbit followed by a coast phase to allow the second burn to inject the satellite into a standard Geostationary Transfer Orbit peaking over 35,000 Kilometers above the equator.

No target orbit was released before Sunday’s mission, but typical GTO injections for Long March 3B reached orbits around 190 to 200 Kilometers on perigee, 35,000 to 41,000 Kilometers on apogee and 25 to 27 degrees inclination. Orbital data provided by the Joint Space Operations Center for Sunday’s launch shows two objects in an orbit of 193 x 16,357 Kilometers, 25.68° – confirming the flight was significantly off target and ended well short of the intended Geostationary Transfer Orbit.


Per reports posted after news of the incident became known, the Long March 3B suffered an attitude control issue of an as-of-yet unknown cause. The 5,100-Kilogram Zhongxing-9A satellite was reported in healthy condition after its botched orbital insertion, successfully completing initial orbital operations including the deployment of its power-generating solar arrays and communications antennas.

Analysis is currently underway whether it will be possible to maneuver the satellite into a Geostationary Orbit and getting any meaningful life time out of the mission given the rather large delta-v deficit in excess of 500m/s that would have to be made up by the spacecraft and could cost over ten years of operational life.

Sunday’s launch was the 93rd of the Long March 3 rocket family that debuted back in 1984 and the 40th of the CZ-3B heavy-lifter that adds four boosters to the basic CZ-3 three-stage stack. The Long March 3 family had kept a spotless record over 50 missions, suffering its most recent launch failure in 2009 with the Indonesian Palapa-D satellite that ended up in a lower-than-planned orbit due to an engine problem on the third stage.

All in all, Long March 3-class rockets suffered six failures and partial failures, including the off-target ZX-9A mission; four failures occurred over the first 11 missions flown by the CZ-3 family. Long March 3B has had only one failure before, occurring in 1996 on the rocket’s maiden flight when it veered off course immediately after liftoff and crashed into a nearby village, claiming a very large number of casualties.

The consequences of Sunday’s failure will be severe for the satellite and impacts on China’s planned “second-half surge” remain to be seen. The Chinese typically schedule most of their launches in the second half of the year – Sunday’s mission was only the seventh orbital launch carried out from China in 2017 with well over a dozen missions still on the manifest.

Long March 3 missions are likely to be put on hold until the cause of the failure is fully understood and corrective actions can be implemented. The next Long March 3 mission was scheduled for mid-July when a CZ-3C was expected to loft a pair of Beidou-3 satellites into Medium Earth Orbit to join China’s global navigation satellite system.


As is typical for an incident like this, engineering teams will also be looking at commonality with other launch vehicles, however, the CZ-3 third stage is unique to this particular launcher family. Some commonality exists between the CZ-3 upper stage and the second stage of China’s new heavy-lift Long March 5 rocket that uses two YF-75D engines, a much evolved version of the YF-75 that powers the CZ-3’s third stage. CZ-5 was expected to make its second flight in early July with the Shijian-18 advanced communications satellite.

Sunday’s launch mishap was the third orbital launch failure or partial failure in 2017 after Japan’s SS-520 experimental NanoSatellite launcher failed to lift the TRICOM-1 3U CubeSat in January and Rocket Lab’s Electron small satellite launch vehicle did not reach orbit on its debut mission last month. Although Rocket Lab’s inaugural mission was celebrated as a success for demonstrating much of the new rocket’s flight sequence, it by definition counts as launch failure for not reaching orbit when intending to do so.