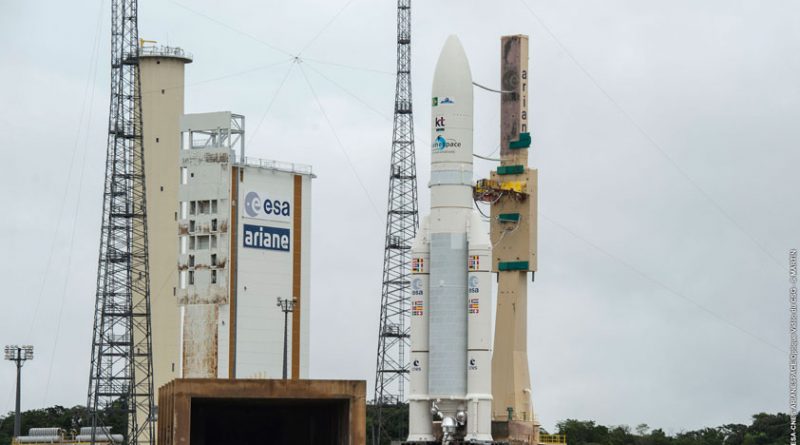 Europe’s Ariane 5 rocket rolled out to its French Guiana launch pad on Wednesday for a long-delayed dual-satellite delivery that was held up for over a month by a general strike in the small French department that caused operations at the space base to grind to a complete halt.

Liftoff from the ELA-3 launch site at the Guiana Space Center is planned for a window stretching from 20:31 to 23:19 UTC on Thursday and Ariane 5 will be in action for 36 minutes to deliver Brazil’s SGDC and KTSat’s KoreaSat-7 satellites to Geostationary Transfer Orbit.

Preparations for the second Ariane 5 mission of the year had progressed to an advanced level by March 20 when the 55-meter tall rocket stood fully assembled and ready for rollout from its Final Assembly Building for liftoff the next day. An on-time rollout was prevented by a strike within the company running heavy transportation at the spaceport and Arianespace anticipated the situation would resolve in a period of days, but it quickly became apparent that Europe’s spaceport and much of French Guiana would stand still for an extended period.


It was not the first time a launch from the South American spaceport was held up by a social movement after strikes delayed an Ariane 4 by four days back in 1989 and an Ariane 5 had to wait an additional day in 2011, but it soon became clear that the 2017 labor dispute would not resolve in a matter of days when protests around the country’s large cities called for a general strike.

Government officials and protest leaders finally came to an agreement on April 21, allocating €1.1 billion to improve public safety, health care, education and transportation with another €2.1 billion funding package placed under priority review by the French government. However, the month-long stand still was not without consequences for Arianespace operations as a satellite booked on a future launch had to be flown out of the country after sitting on the tarmac for several days with no clear route to the space center, 300 Russian personnel in charge of Soyuz operations left the country after sitting on their hands for weeks and Arianespace encountered around a €10 million loss over the month-long social movement.


The French launch services provider reaffirmed its customers after the strike ended that all twelve missions scheduled for 2017 will be performed as the company takes advantage of a planned lull in launch operations in May and June to fly the three missions affected by the strike to end up back on a nominal schedule by the end of June.

The two passengers of Ariane 5 mission VA236 remained in place atop the rocket throughout the month-long delay, being supplied with conditioned purge flow. A detachment of the French Foreign Legion provides permanent protection services for the space center and Ariane 5 remained in a fully safe configuration inside its Final Assembly Building.

Located in the upper payload berth for the VA236 mission is SGDC, the ‘Geostationary Satellite for Communications and Defense’ – a defense and strategic communications satellite operated by Telebras on behalf of the Brazilian government. Built by Thales Alenia Space based on the large Spacebus-4000C4 platform, the satellite hosts 50 Ka-Band and seven X-Band transponders to deliver a high data throughput of 57 Gbps. The Ka-Band payload will be utilized to deliver nationwide Internet distribution over Brazil while the X-Band payload covers South America and neighboring maritime regions to carry encrypted communications for the Brazilian government.

The 5,735-Kilogram SGDC satellite is joined by the smaller Koreasat-7 spacecraft in the lower payload slot, hidden underneath the Sylda adapter. Also built by Thales, the 3,680kg satellite makes use of the smaller Spacebus-4000B2 platform and facilitates 30 Ku-Band and three Ka-Band transponders that feed steerable, high-throughput beams to direct capacity where it is needed. Satellite operator KTSat of South Korea will use the satellite to deliver video and data services, Internet access, DTH television broadcasting, government communications and corporate networking services.

Thursday’s launch is the 287th mission by Arianespace and the seventh all-Thales flight. KTSat is a repeat customer at Arianespace, having flown two satellites on Arianespace vehicles in September 1999 and December 2010.

The VA236 launch campaign was resumed on April 24 with a series of reviews of steps needed to return the launch base to full service and set up for the rollout of the launch vehicle. A number of steps had to be repeated such as arming the launch vehicle and conducting the Launch Readiness Review to ensure there were no red flags prior to heading into final launch preparations.

Ariane 5 emerged from the Final Assembly Building on Wednesday for a 2.7-Kilometer trip over to the ELA-3 launch pad where the rocket was carefully placed atop its launch table for the final 24-hour launch preparation process. Countdown operations will formally begin at 9:08 UTC, eleven hours and 23 minutes before the day’s afternoon launch window opens.

The first several hours of the countdown are dedicated to the final physical reconfigurations of the launcher and close outs of the launch complex with activation of the vehicle occurring ten and a half hours ahead of T-0 for detailed checkouts of the rocket’s various subsystems. Propellant loading will pick up five hours ahead of launch with chilldown operations before the EPC core stage and ESC-A upper stage will be loaded with 184 metric tons of -183° Liquid Oxygen Oxidizer and -253°C Liquid Hydrogen fuel. The 30.5-meter tall EPC will enter propellant loading at T-4 hours and 23 minutes followed 40 minutes later by the second stage, taking around two hours to reach stable replenish on both stages.

Ariane 5 will be put through a repetition of communication checks before the launch team presses into a final set of preparatory steps to set the stage for the seven-minute synchronized sequence where computers take over to transition the vehicle to a fully autonomous launch configuration. Checking off dozens of steps in the last seven minutes, Ariane 5 will pressurize its propellant tanks, switch to battery power, arm the various pyrotechnic charges on the vehicle and assume full control of all the vehicle’s functions just before ignition of the main engine.

Upon ignition of the EAP boosters, Ariane 5 will thunder off with a total thrust of 1,420 metric tons, balancing in a perfectly vertical posture for the first 13 seconds of its climb before pitching and rolling onto a due easterly departure path for a quick trans-Atlantic flight. Ariane 5 will push through the speed of sound just 49 seconds after liftoff followed around twenty seconds later by the area of Maximum Dynamic Pressure.

Doing most of the work in the initial flight phase, each of the boosters will consume 237 metric tons of solid propellant to help accelerate Ariane 5 to a speed approaching two Kilometers per second. Once sensing declining pressure inside the boosters, Ariane 5 will fire pyrotechnics to separate the spent EAPs at T+2 minutes and 20 seconds, continuing on toward orbit under the power of the core stage alone.

Blazing uphill with a thrust of 136 metric-ton-force, Ariane 5 will depart the discernible atmosphere by three minutes and 22 seconds into the mission, allowing the payload fairing to be jettisoned to reveal the SGDC satellite while Koreasat-7 will remain hidden under the Sylda adapter. Shutdown of the core stage is expected at T+8 minutes and 53 seconds, followed six seconds later by the separation of the spent EPC that will continue on a ballistic trajectory toward atmospheric entry.

Four seconds after separation, the ESC-A will fire up its six-metric-ton HM-7B engine on a long burn of 15 minutes and 54 seconds to boost the stack into a highly elliptical Geostationary Transfer Orbit. VA236 is targeting an orbit of 250 by 35,926 Kilometers at an inclination of 4.0 degrees; the launcher is carrying a total payload upmass of 10,289kg including the two satellites and their associated adapters.

Having accelerated the vehicle to 9.4 Kilometers per second, the second stage will shut down its main engine and enter the complex ballistic phase to go through a range of motions to drop the satellites and Sylda adapter off in slightly different orbits. SGDC will be first to be sent on its way at the T+28-minute mark followed by the jettisoning of the Sylda adapter two minutes later to reveal the Koreasat-7 spacecraft that will depart the second stage just shy of 37 minutes into the mission, marking the conclusion of the 92nd flight of the Ariane 5 rocket.