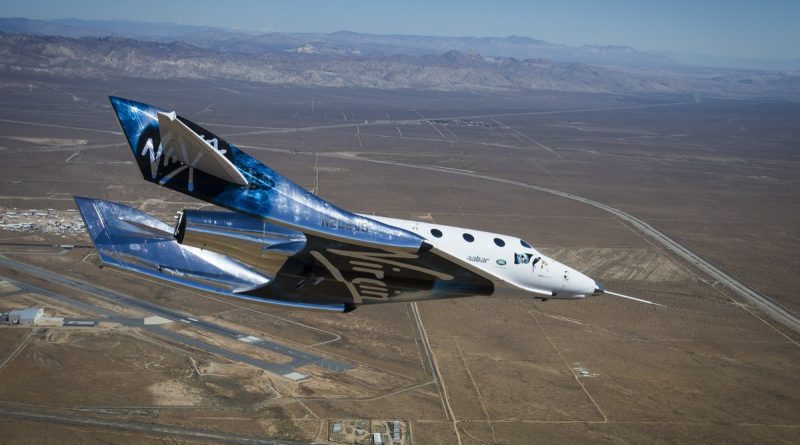 Virgin Galactic’s second SpaceShipTwo, the VSS Unity, completed its first feather flight on Monday out of Mojave Air and Space Port to mark another major step on the path toward powered test flights later this year to finish qualifying the sub-orbital space plane for commercial missions with paying customers.

The second production SpaceShipTwo vehicle flew freely for the first time last December after two years of recovery following the fatal accident of the VSS Enterprise during a powered test flight in 2014. Although no firm time table has been set, Virgin Galactic hopes to catch up with testing of VSS Unity this year to begin powered testing that will take the craft through a number of flights with increasing rocket burn duration until being able to simulate fully operational flights to the edge of space and back.

Prior to Monday’s test, the VSS Unity had completed four captive carry tests to characterize its aerodynamic characteristics and flight control performance followed by three non-feathered free flight tests. At the controls for Monday’s flight were pilots Mark Stucky and Mike Masucci and the WhiteKnightTwo carrier craft was piloted by Nicola Pecile and CJ Sturckow, assisted by test engineer Dustin Mosher.


The primary focus was on the craft’s feather re-entry system that had gone through extensive testing on the ground before being cleared for flight testing. SpaceShipTwo’s wings are designed to rotate upward into what is known as the feathered configuration which changes the craft’s aerodynamic behavior and places it into a pitched-up orientation – increasing drag to bleed off speed as it comes back into the atmosphere. The feather system allows SpaceShipTwo to slow down in higher atmospheric layers and a second major advantage is SpaceShipTwo will automatically stabilize in this high-drag orientation.

“Full analysis of the data from today’s flight will, as always, take time; but initial reports from the pilots and from mission control are extremely encouraging,” Virgin Galactic said in a statement after Monday’s test. “Once data reviews are complete, we will move forward with our testing program—pressing onward with additional glide flights designed to expand our envelope of flight weights and centers of gravity.”


The feather system, specifically its manual deployment by the onboard crew, was the primary focus of the investigation conducted by the National Transportation Safety Board after the 2014 test accident that killed the craft’s co-pilot while the injured pilot was able to parachute to safety. The NTSB concluded the structural break-up of the winged spaceplane was caused by a premature unlocking of the craft’s feather mechanism during the dynamic transsonic flight regime which induced the feathers to extend followed by the rapid disintegration of the craft.

Prior to finishing work on the VSS Unity, Virgin Galactic and the craft’s builder, The Spaceship Company, implemented a number of changes including a mechanical inhibit that will prevent unlocking of the feathers during the safety-critical phase of the flight. Pilot training and procedure manuals were also updated to reflect the dangers associated with a premature unlocking of the craft’s feather system.

No firm plan exists for VSS Unity’s test flight program in terms of the number of glide tests to be performed ahead of rocket-powered flights. The fundamental tests up to powered flights were already completed by the first vehicle and engineers are now working to verify Unity’s behavior in various flight environments before upgrading to powered tests.

The start of commercial operation of SpaceShipTwo will depend on the progress of the test program and is expected by the end of 2018, though Virgin reassured that the company’s engineers will have the last word on when the craft is ready to head into commercial operation which will occur out of Spaceport America in New Mexico.

Virgin Galactic has already lined up hundreds of customers that are ready to pay up to $250,000 for a flight to the edge of space to witness the sight of the curvature of Earth and its thin atmosphere in a flight lasting about two and a half hours from takeoff to landing – of which only a few minutes would be spent in microgravity.

Virgin finds itself in competition with Blue Origin that has been making strides in recent years with the New Shepard booster and crew capsule combination, completing numerous sub-orbital test flights and proving its re-usability ambitions by using the same vehicle for five consecutive tests between November 2015 and October 2016. Blue Origin aims for initial crewed test flights in the first half of 2018 followed a short time later by suborbital passenger and science flights.