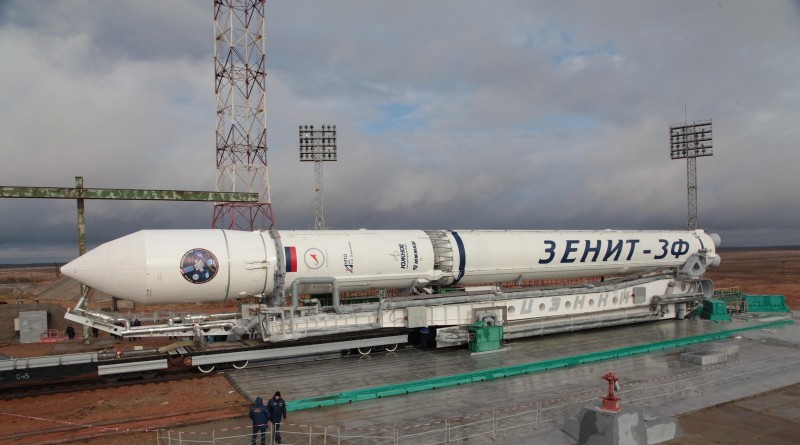 A Zenit rocket has been rolled to the launch pad at Site 45/1 of the Baikonur Cosmodrome for the launch of the Elektro-L No. 2 weather satellite on Friday. Liftoff of the Zenit 3SLBF rocket is planned at 13:45 UTC and the two-stage launcher is expected to operate for eight and a half minutes before handing off to the Fregat SB upper stage that will be in operation for nearly nine hours, conducting a three-burn mission to deliver the 1,855-Kilogram satellite to Geostationary Drift Orbit.

Elektro-L No. 2 is the second satellite in Russia’s second generation of Meteorological Satellites operating from Geostationary Orbit. The project finds its origin in the 1980s when plans were outlined to launch a pair of satellites to Geostationary Orbit for operational meteorology and Earth observation. The project was downsized to only one satellite that launched in 1994 and stopped operating in 1998. As a follow-on, the Elektro-L program was initiated in 2001 when NPO Lavochkin was awarded the contract for the construction of the two satellites, the first of which launched in early 2011.

This is the first Zenit launch in over a year and the first from Baikonur in over two years, but it may very well be the last flight of the powerful Zenit booster.

The Zenit 2 has been flying since 1985 and Zenit 3 has been around since 1999, being used for missions to a variety of orbits, though the vehicle’s reliability has been sub-par with 69 successful flights out of 82 launches.

The first and second stage of the Zenit launcher were designed by Yuzhnoye and are manufactured by Yuzhmash, both based in the Ukraine. Due to the conflicts arising between Russia and the Ukraine in recent years, the future of the Zenit had been up in the air for some time as Ukrainian engineers were not allowed to complete processing of Zenit rockets at the Baikonur Cosmodrome. Eventually, agreements were reached for the processing of Elektro-L’s booster that had been stored in Baikonur since mid 2013.

There had been some conflicting information on how many Zenit rockets would remain after the launch of Elektro-L No. 2. It is understood that one flight-ready Zenit rocket remains and was manifested for the launch of the Spektr-RG space telescope and a second Zenit was in assembly for the launch of the Ukrainian Lybid communications satellite, though the future of this project has become uncertain given the strained relations between Russia and the Ukraine. Spektr-RG was reported to have moved to Proton, but there has been no official word on changes in its launch plans.

Reports were published in the run-up to this launch that it will be the final Zenit mission, also marking the last flight of the world’s most powerful rocket engine used on the first stage of the rocket. It remains to be seen whether the remaining Zenit will receive a flight assignment or become a museum piece.

With the approval of the Russian State Commission, the Zenit rocket made its roll to the launch pad on Wednesday. Once arriving at Site 45/1, the launcher was put in its vertical launch position to begin the usual L-2 Day Operations during which technicians will perform final testing of the launch vehicle and close out the rocket and pad structures.

On Friday, Countdown Operations will get underway that include more vehicle tests and activations ahead of fueling at T-2 hours and 30 minutes. The first stage will receive 236,567kg of Liquid Oxygen while the second stage receives a total of 59,431kg of oxidizer. Loading the first and second stage with highly refined Kerosene begins around 90 minutes before liftoff. About 90,219kg of fuel are loaded into the first stage while the second is filled with 59,431 Kilograms.

At T-15 minutes, the Transporter Erector Device will be retracted and moved to its launch position at a safe distance to the rocket. Over the final two minutes of the countdown, the launcher is transferred to internal power and propellant tank pressurization takes place. The massive RD-171 first stage engine will ignite 3.5 seconds ahead of launch to build up thrust, reaching a total liftoff thrust of 770 metric ton-force.

The first stage of the Zenit-3SL is 32.9 meters tall, 3.9m in diameter and weighs 354,350kg at launch. RD-171 itself weighing 9,500 Kilograms, delivers 7.55 Meganewtons of thrust operating at a high chamber pressure of 245bar using oxygen-rich technology. Its four combustion chambers share common turbopump equipment but its nozzles can be gimbaled individually by up to 6.3 degrees to control the vehicle in flight.

Thundering uphill, the Zenit will make a pitch and roll maneuver to align itself with its precise ascent trajectory – departing Baikonur to the north-east. The launcher will pass maximum dynamic pressure one minute and six seconds into the flight as the first stage continues to power the vehicle.

Zenit’s second stage is 10.4 meters in length and carries 82,500 Kilograms of propellants that are expended during a 4-minute 40-second main engine burn and a longer vernier burn.

Five minutes and 17 seconds into the flight, Zenit will jettison its protective payload fairing, exposing the Elektro-L satellite and Fregat SB upper stage. Following main engine cutoff, the RD-8 vernier will burn for about one more minute to inject the stack into an elliptical parking orbit of 167 by 554 Kilometers at an inclination of 51.35 degrees.

Fregat Separation is expected 8 minutes and 35 seconds into the flight, setting the stage free for a flight of close to nine hours, directly delivering the satellite close to its planned Geostationary Orbit.