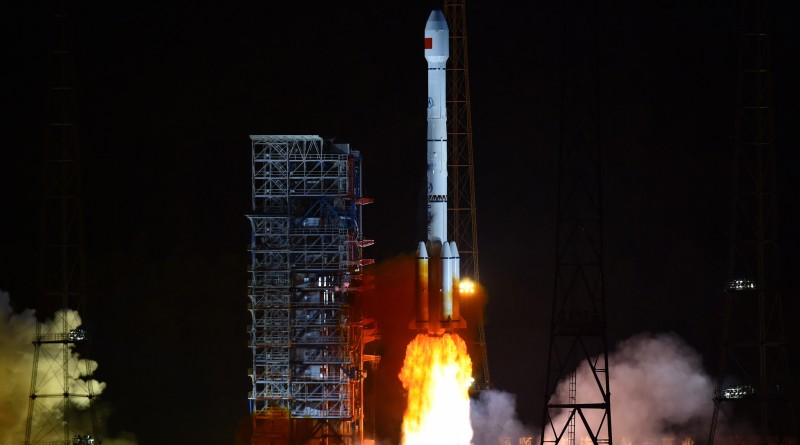 A Chinese Long March 3B rocket blasted off from the Xichang Satellite Launch Center at 16:46 UTC on Wednesday, carrying a military communications satellite to Geostationary Transfer Orbit. Keeping up the pace in orbital launches towards the end of the year, this marks the sixth flight of the heavy-lift Long March 3B and the 13th mission of the Long March fleet in the last three months.

Chinese officials confirmed the success of the launch about two hours after the post-midnight liftoff.

The payload of Wednesday’s launch has been identified as Zhongxing-1C (ChinaSat-1C) and belongs to China’s military communications satellite fleet operated from Geostationary Orbit, 36,000 Kilometers above the equator to deliver secure communications around the globe. Operated by the Chinese armed forces, the architecture of the secure satellite communications system calls for a division of tactical and strategic communications.

The Fenghuo series of satellites is used to provide tactical communications in the form of secure data and voice links between ground terminals including mobile systems operating in the UHF frequency range.

The Shentong satellite series is operated by the People’s Liberation Army and delivers secure voice and data communications in Ku-Band for strategic applications. Shentong was inaugurated with the ChinaSat-20 mission in 2003 and a second first generation satellite was lofted in 2010. The second generation of Shentong satellites saw two launches to date, the first in 2015 and the second last month when a Long March 3B delivered the ChinaSat-2C satellite to Geostationary Transfer Orbit.

Based on the ChinaSat-1C designation, the satellite likely belongs to the Fenhuo tactical communications satellites. No information or technical details are available on the satellite and no updates were given on the preparation for the launch with the exception of the typical navigational warnings in the usual secrecy of Chinese military space missions.

Lifting off from Xichang at 0:46 a.m. local time, the 56.3-meter rocket weighing 456 metric tons completed a short vertical ascent before aligning itself with a south-easterly trajectory, taking it over the Yunnan, Guizhou and Guangxi provinces, the Gulf of Tonkin, Hainan Island and out over the Pacific Ocean.