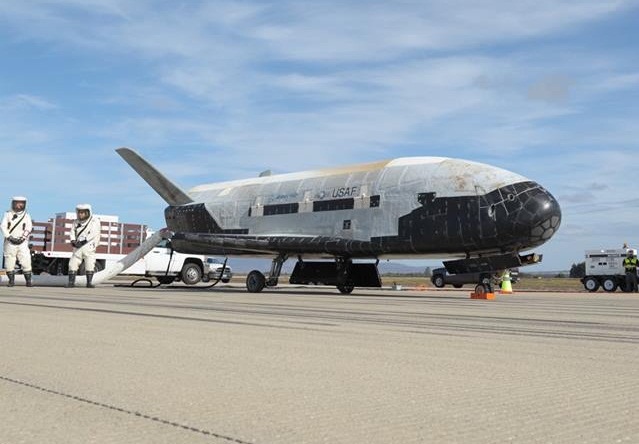 The ominous X-37B space plane operated in semi-secrecy by the U.S. Air Force may be approaching the end of its fourth mission, indicated by a move to a lower orbit earlier this month that has been a sure sign of an imminent landing on the craft’s first three missions.

OTV-4, as this mission is known, blasted off atop an Atlas V rocket on May 20, 2015 to mark the fourth overall flight of the winged spacecraft and the second of this particular X-37B vehicle. As is typical for X-37B missions, only very limited information was released on the flight’s objectives and the mission’s duration was given as a minimum of 200 days.

In the hush-hush nature of X-37B, no information on the craft’s orbit is provided through official channels, but the amateur satellite tracking community kept close watch over the first three OTV missions and the fourth would be no different. Satellite watchers got a fix on the spacecraft’s orbital trajectory within six days of launch, showing OTV-4 in a relatively low orbit of 312 by 325 Kilometers at an inclination of 38 degrees. While the altitude of X-37B missions has widely varied in the different missions, all previous flights had used an orbital inclination of 40 to 43 degrees.


Satellite watchers lost track of the X-37B in August 2015 and recovered it in October in an orbit of 349 x 357 Kilometers, in-line with the OTV-2 mission that spent the majority of its mission in a similar orbit. Over the course of its flight, OTV-4 kept its apogee around 355 Kilometers while the perigee was lowered to 325 Kilometers. This behavior is fairly consistent with the previous two X-37B missions which stuck to a constant orbit for the vast majority of their missions unlike the very first X-37B flight that kept observers busy by flying in five different orbits over the course of its mission.

This week, satellite observers noticed that OTV-4 went missing again as the result of a maneuver that placed it into a different orbit. Observations from Spain led to the recovery of the vehicle in an orbit of approximately 307 by 320 Kilometers. All previous OTVs conducted orbit reduction maneuvers in the days leading up to their landing – first into an orbit around 320 Kilometers followed by a second maneuver taking the vehicle below 300km for the last few days of the mission.

It is very likely that the recent orbital maneuver by OTV-4 was completed as a preparatory step for the vehicle’s homecoming. Additionally, there have been reports of activity at the Shuttle Landing Facility at the Kennedy Space Center, one of several available landing sites for the X-37B, the others being Vandenberg Air Force Base and Edwards Air Force Base, both in California.

Florida has been identified as the desired landing site for the X-37B before the OTV-4 mission as the vehicle’s main processing base was shifted to KSC starting in late 2014 when the program’s main contractor Boeing acquired former Space Shuttle Orbiter Processing Facility 1. A prominent sign reading “Home of the X-37B” has been placed on OPF-1, indicating the facility is fully equipped to handle pre- and post-flight processing of the winged space planes.

Hints to a possible landing time are not available but should show up in the days leading up to X-37B’s return in the form of air route closures. The Eastern Range is booked by an undisclosed customer until February 17 which required SpaceX to move the earliest possible launch date for the Dragon SpX-10 mission to the 18th. Whether this closure is related to X-37B is not known.

Saturday marked day 634 in the OTV-4 mission, still well short of the 674-day record duration set by OTV-3 but surpassing the first two X-37B missions that came home after 224 and 468 days, respectively.

The exact objectives of the OTV-4 mission were not disclosed to the public, but contrary to previous missions, details on two of the experiments hosted within the craft’s 2.1 by 1.2-meter payload bay were released.

The test was to involve operation of the thruster over an extended period of time to learn about any degradation that may occur in the space environment through analysis of telemetry gathered from the thruster and data from OTV’s accelerometers, measuring the thrust delivered by the system.

It will be interesting to see what type of coverage OTV-4’s homecoming will receive in terms of visuals of the landed vehicle. Prior to launch, no photos of the spacecraft were provided, sparking some speculation of external hardware changes.