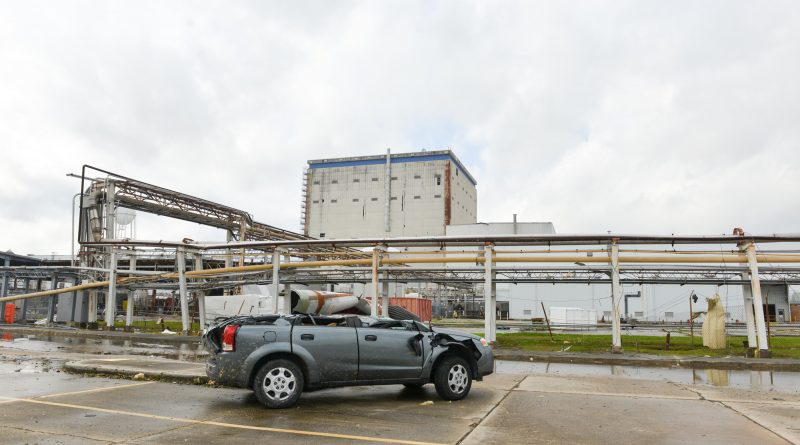 A strong tornado plowed through NASA’s Michoud Assembly Facility in Louisiana on Tuesday, leaving a trail of damage to buildings and vehicles but luckily causing no severe injuries to 3,500 personnel on site.

Michoud has been a major player in U.S. rocketry since the early 1960s, building the large first stages of the Saturn IB and Saturn V rockets, and manufacturing the External Tanks for the Space Shuttle before taking on its current role of building NASA’s Orion Spaceship and Space Launch System rocket as well as Sierra Nevada’s Dream Chaser space plane. MAF is located near the Mississippi River, downstream of downtown New Orleans.

Tuesday’s tornado was the result of a volatile meteorological setup with a line of thunderstorms associated with an early springtime cold front progressing through the southern U.S.

Weather radars showed the prominent hook echo of a strong tornado with wind speeds approaching 250 Kilometers per hour when the rotation moved over Michoud at 11:25 a.m. local time, 17:25 UTC.


Radar-based wind speed measurements would suggest a rather powerful tornado ranking as an EF3 on the Enhanced Fujita Scale, however, the official ranking by the National Weather Service will be determined through ground observations of tornado damage to structures, cars and vegetation. Videos of the event showed the classical appearance of a powerful wedge tornado and radar detected signatures of a debris cloud as the tornado picked up debris from the ground.

At least seven tornadoes touched down within the line of storms moving through the Southeast on Tuesday, causing widespread damage to communities in Louisiana.

Images of damage quickly emerged on social media, showing overturned cars and damage to building roofs and walls. NASA issued an initial statement within three hours of the tornado indicating that damage assessments were underway and employees were being accounted for. In an evening update, NASA was able to confirm that all 3,500 employees at the facility were accounted for and only minor injuries had occurred. Among the buildings that incurred damage was Michoud’s main manufacturing building which sustained roof damage in several areas. Around 200 parked cars received damage.

“Our hearts go out to our employees and the people in New Orleans who have suffered from this serious storm,” said Keith Hefner, director of the facility. “The safety of our team is always our main concern, and we are pleased to report that we’ve identified only minor injuries.”

Security and emergency operations crews began working on temporary repairs, restoring power and securing perimeter fencing overnight and into Wednesday. In an updated statement, NASA said around 40 to 50% of buildings received damage and around five buildings have some form of severe damage.

Flight hardware at the facility was mostly spared from tornado damage including a one-of-a-kind welding device needed to complete welds around the circumference of the giant 8.4-meter diameter SLS core stage tank. The most recently welded SLS piece had left MAF just one week before the tornado struck.

Although no critical flight hardware was harmed by the storm, some equipment was left exposed to the elements due to damage to buildings. Teams scrambled to patch holes in the roof of Building 103, the main construction building at MAF, housing critical parts and tools for SLS and Orion.

“Michoud has a comprehensive emergency plan that we activated today to ensure the safety of our people and to secure our facilities,” said Hefner. “I am proud of our dedicated team onsite who are successfully implementing that plan.”

Michoud sustained storm damage in 2005 when Hurricane Katrina struck the Gulf Coast, leaving a path of destruction in its wake. At MAF, Katrina caused severe damage to buildings and Space Shuttle hardware including ET-122, an external tank that eventually was repaired and helped propel Shuttle Endeavor into orbit on its last mission in 2011.

The Pegasus barge parked at Michoud also weathered the storm with no damage according to NASA statements. Pegasus was used to ship External Tanks for the Shuttle from MAF to the Kennedy Space Center and will be re-purposed to haul SLS core stages between their manufacturing site in Louisiana, the main test site at Stennis Space Center, Mississippi and Florida’s Space Coast.

Any impacts to SLS and Orion schedules due to tornado damage will become clear over time, depending on how fast permanent repairs can be implemented to safely resume work at MAF’s facilities. The inaugural test launch of the 98-meter tall Space Launch System is scheduled for November 2018 on a shakedown mission of an Orion spaceship to lunar orbit and back. The first crewed Exploration Mission on SLS/Orion is planned between 2021 and 2023.

One historical artifact that has fallen victim to the tornado is the first Shuttle External Tank to stand on a launch pad. Known as the external tank-ground vibration test article (ET-GVTA), the tank was in outdoor storage when the tornado hit, lifting up the tank and sending it rolling over a vehicle and into nearby structure. Photos captured after the storm passed show the tank structure crumpled to a pile, marking the demise of a piece of Space Shuttle history.

Michoud had also been home to ET-94, the last remaining external tank flight article, as well as the Saturn V first stage for the canceled Apollo 19 mission. Both these articles left Michoud last year to head for exhibits in California and Mississippi.