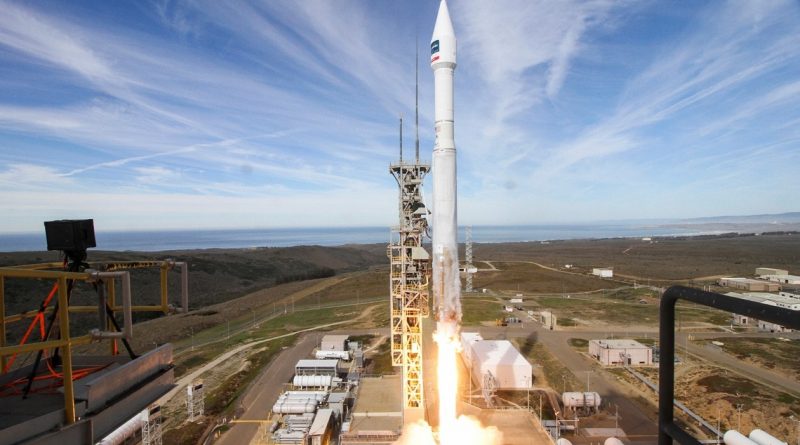 Soaring into the skies over California’s coast on Friday, ULA’s Atlas V rocket resumed launches from the U.S. West Coast with the commercial WorldView-4 satellite that sets out to deliver the highest resolution imagery of Earth available on the commercial market.

Friday’s launch marked the sixth flight of the workhorse launcher in 2016, coming after seven consecutive launches from Cape Canaveral. Shifting coasts, Atlas V was looking forward to its first mission from Space Launch Complex 3E at Vandenberg in over a year owed to the delay of the InSight Mars lander and an extended stand-down on the Western Range for the relocation of the Range Control Center and a massive wildfire that led to a two-month slip to facilitate repairs of the power and communications infrastructure at the Air Force Base.

Atlas V rumbled off on time at 18:30 UTC, powering uphill under the loud thunder of its Russian-built RD-180 engine that fired for four minutes as the 58-meter rocket headed downrange to the south-west, flying toward a polar orbit. The rocket’s trusted Centaur Upper Stage completed a single burn to reach an orbit over 600 Kilometers to send the two-metric-ton satellite on its way 19 minutes into the flight. With primary mission success already checked off, Atlas V headed into a two-hour secondary mission to deploy a group of seven small CubeSats.


Friday’s launch marked a rare commercial mission of the Atlas V, usually tasked with the delivery of payloads for government customers like the Air Force or National Reconnaissance Office. When flying fully commercial missions, Atlas V is still operated by the United Launch Alliance team, but the launch provider is Lockheed Martin Commercial Launch Services that markets the Atlas V in the competition for commercial contracts.

It was the tenth commercial flight out of 66 missions of the Atlas V rocket, the second for satellite operator DigitalGlobe following the launch of WorldView-3 in August 2014.

WorldView-4 spent three years in storage, starting out as GeoEye-2 when being ordered from Lockheed Martin and Harris Corp. in 2010 to join GeoEye’s satellite fleet after a planned 2013 launch. After GeoEye and DigitalGlobe merged in 2013, it was decided to go ahead with the WV-3 launch while placing the GeoEye satellite into storage to be called up for launch when needed within the constellation.

Launch plans for the re-named satellite were firmed up in late 2014 due to increasing market demands for DigitalGlobe imagery after the company was cleared by the U.S. Department of Commerce to sell its highest resolution imagery to all customers, lifting a restriction of only selling the high-quality images to the U.S. government and select private entities.

The 2,086-Kilogram WorldView-4 satellite is based on Lockheed’s LM900 satellite bus coupled with a large telescope assembly that gives the spacecraft a total length of 5.3 meters.

It is only the third iteration of LM900 to fly, being used for two Ikonos imaging satellites, one of which failed to reach orbit while the other had an excellent service life of 16 years under operation by different companies including GeoEye and DigitalGlobe.

The current generation of LM900 uses heritage from Lockheed’s interplanetary division that had tremendous success in recent years with the Mars Reconnaissance Orbiter, Mars Maven, Juno and most recently with the launch of OSIRIS-REx – all using a common avionics chain that is also employed by WorldView-4.

With a robust design, WorldView-4 looks forward to a mission of at least eight years, collecting very high-resolution images of Earth with its 1.1-meter telescope developed by ITT Corporation.

Covering a ground swath of 13.2 Kilometers, WorldView-4 captures black-and-white images at a 31-centimeter ground resolution and color imagery at 1.24 meters. An agile pointing system allows the satellite to quickly slew and collect adjacent strips to assembly images of an area of 66 by 112 Kilometers during a single flyover.

The Atlas V rocket for this mission, AV-062, can also look back at a longer-than-usual road to liftoff. It was stacked at SLC-3E last December, designated to lift off in March with the InSight mission, but only days after the rocket was assembled, NASA was forced to call off the planned launch and delay InSight by two years due to serious technical trouble with the Mars lander’s primary seismic instrument.

NASA released the Atlas V launch vehicle and United Launch Alliance decided to keep the vehicle stacked inside the Mobile Service Tower that provided adequate protection from the elements for the extended stay on the pad.

Topped by its commercial imaging payload in early September, Atlas V counted down to a September 16 launch which had to be scrubbed due to a technical issue related to a leaky propellant umbilical. The expected two-day delay to repair the Hydrogen line turned into a two-month stand-down – caused by the largest wildfire in Vandenberg’s history, raging for over a week and consuming an area of 50 square Kilometers.

Getting back into a launch posture, Air Force engineering teams worked tirelessly for weeks to restore the power and communications infrastructure and re-open the range for rocket launch business, beginning with the launch of Atlas V.

Atlas V went through final checks earlier this week before heading into an eight-hour countdown in the very early morning hours on Friday, local time. Dawn broke just as teams began to roll the large Service Tower to its launch position at a safe distance from the rocket at the L-5-hour mark in the countdown.

Atlas V was well-behaved in the first hours of its countdown that were filled with a series of tests and reconfigurations – in progress while the launch complex was buttoned up by engineers. Picking up the count after a planned hold at the T-2-hour mark, Atlas V headed into a 90-minute tanking sequence to load its Centaur stage with 48,100 liters of Liquid Hydrogen stored at -253°C and 15,700 liters of Liquid Oxygen while the Common Booster Core received 185,500 liters of the -183°C oxidizer. The booster had received its dose of Rocket Propellant 1 – 94,600 liters – prior to the day’s countdown.

Fully fueled at L-30 minutes, Atlas V received an updated version of its launch profile and teams configured the WV-4 satellite for its ride into space to clear the countdown to head into T-4 minutes – the start of a highly choreographed sequence preparing the rocket for liftoff.

Three seconds before clocks hit zero, Atlas V commanded its Russian-built RD-180 engine to ignite, roaring to a thrust of 392 metric-ton force with liftoff occurring at precisely 18:30:33 UTC. Leaving its launch pad, the 58-meter tall Atlas V burned propellant at a rate of 1,150 Kilograms per second – balancing in a vertical position for the initial climb-out of 17 seconds.

Heading into the thinner layers of the atmosphere, thrust on the RD-180 increased to 422 metric ton force before the engine was commanded into a gradual throttle-back to limit acceleration on the vehicle to 5Gs in the final seconds of its burn. BECO – Booster Engine Cutoff was commanded at T+4 minutes and 3 seconds after a nominal performance of the Common Core Booster, meeting its cutoff target well within predicted margins.

The first stage departed the vehicle six seconds after shutdown, using retrorockets to pull away from the Centaur upper stage which immediately purged its reaction control system and pre-started the RL-10 engine. The RL-10C ignited ten seconds after staging and reached its full thrust of 10,400 Kilogram-force, tasked with lifting the stack into its target orbit with a single burn.

In order to achieve the single-burn SSO insertion, Centaur flew a lofted trajectory in the early portion of its burn before pitching down to lift the perigee and reach orbital velocity. The mission aimed for an orbit of 610.5 by 628.3 Kilometers at an inclination of 97.96 degrees.

Centaur shut down its engine 15 and a half minutes after liftoff when sensing it had reached the target orbit, setting up for spacecraft separation via a re-orientation maneuver. The WorldView-4 satellite departed the upper stage at T+19 minutes in what appeared to be a clean separation, heading off on an eight-year mission. The first step for the satellite was the stabilization of its attitude in space followed by the deployment of its solar panels to enter a safe state for several weeks of commissioning and orbital fine-tuning.

Centaur, after checking off the delivery of its primary passenger, retreated from WorldView-4 and headed off on a two-hour secondary mission to deploy seven CubeSats in a rideshare opportunity sponsored by the National Reconnaissance Office. Known as ENTERPRISE, the CubeSat deployment mechanism had room for a total of 12 CubeSat Units and contained spacecraft from different institutions to complete a variety of demonstration tasks.

The seven satellites were successfully ejected from their deployers beginning two hours and 11 minutes after launch in a sequence lasting 14 minutes. All CubeSats are dedicated to technical demonstration missions of some kind, ranging from the demonstration of an instrument to help quantify climate change, a new CubeSat propulsion system to testing of store-and-forward communications, space-to-space comm links and locator beacons for future CubeSat missions.

To conclude its mission later in the day, Centaur will fire up its RL-10 engine again to burn to depletion, in the process boosting itself into a solar orbit, leaving Earth’s gravitational influence at a blazing speed of five Kilometers per second.

A busy closing to 2016 is planned by United Launch Alliance. Attention will shift back to Florida’s Space Coast where an Atlas V 541 has been assembled to lift the GOES-R Geostationary Weather Satellite into orbit on November 19 for NASA and NOAA. In December, ULA’s Delta IV will lift the eighth satellite in the U.S. military’s Wideband Global Satcom System followed by another commercial Atlas V mission to launch the EchoStar 19 communications satellite.