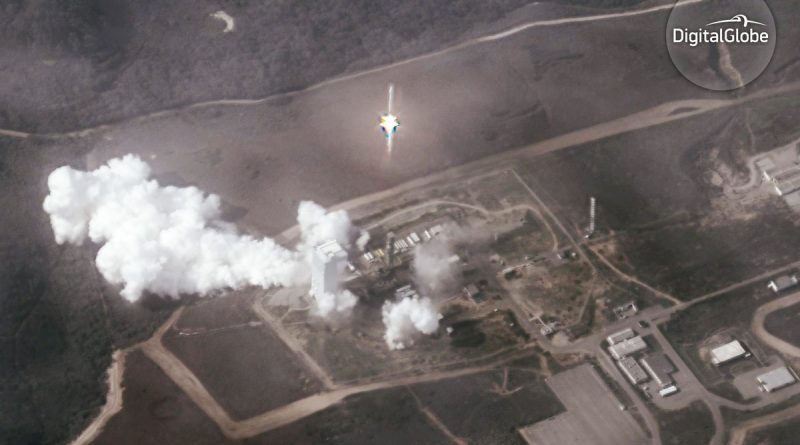 DigitalGlobe announced this week that the company’s WorldView-4 high-resolution imaging satellite was ready for operational services after completing in-orbit checkouts and calibration.

To commemorate the milestone of WV-4 entering service, DigitalGlobe released a photo of its launch taken from a truly unique perspective. The image was captured by the company’s WorldView-2 satellite orbiting Earth at an altitude of 765 Kilometers. At the time WorldView-4 took flight atop its Atlas V rocket on November 11, the WorldView-2 satellite passed 637 Kilometers north-east of Vandenberg Air Force Base, slewing 38-degrees off-nadir to capture a slightly oblique view of the ascending rocket.

The stunning photo shows the 58-meter tall Atlas V rocket still in vertical ascent, balancing on 390 metric tons of thrust delivered by its Russian-built main engine. 19 minutes after the image was taken, WorldView-4 was released into orbit after a flawless ascent mission by the two-stage Atlas V.


It was not the first time a WorldView launch was captured: back in 2014 when WorldView-3 was taking to the skies aboard an Atlas V, DigitalGlobe collected a series of images showing the rocket’s progress toward orbit, creating a spectacular .gif animation.

WorldView-4, although from a different manufacturer, can be considered a companion to the WorldView-3 satellite in that both achieve a ground resolution of 30 centimeters – the highest available on the commercial market. The addition of WV-4 doubles DigitalGlobe’s daily capacity for unmatched satellite imagery that finds application in a vast number of areas.

“Imagery with this level of detail enables users to reliably read street markings, distinguish between cars, trucks, and vans, and confidently understand activities of significance,” DigitalGlobe said in a statement.

WorldView-3 is primarily used to capture imagery for U.S. government customers and WV-4 will allow DigitalGlobe to offer high-resolution products to commercial users in the U.S. and allied nations. The WorldView-4 satellite also allows for direct-tasking by customers, the first of which is already receiving data from the satellite. Tasking orders and archive access for WV-4 will be made available to all DigitalGlobe Customers in the second half of the year.

“Meeting our commitment to delivering WorldView-4 access on time for our customers is a tremendous achievement,” said Tim Hascall, DigitalGlobe EVP and Chief Operations Officer. “We look forward to making WorldView-4’s capabilities available to all of our customers, helping them to make critical decisions with confidence for many years to come.”

WorldView-4 currently resides in an orbit of 613 by 617 Kilometers, inclined 97.96 degrees which allows the satellite to capture images of any location on the planet. From its orbit, WV-4 achieves a resolution of 31 centimeters in black-and-white panchromatic imagery and 1.24 meters for full color and near infrared images with a total daily coverage of up to 680,000 square Kilometers.

WorldView-4 is the fifth active satellite currently under operation by DigitalGlobe. It started out as GeoEye-2 when being ordered from Lockheed Martin in 2010 with a planned launch in 2013.

After the merger of GeoEye and DigitalGlobe, WorldView-3 proceeded toward launch and GeoEye-2 went into storage. Based on the rising demand for high-resolution imagery, DigitalGlobe decided to firm up a 2016 launch date for the re-named satellite.

A decision by the U.S. Department of Commerce in 2014 played a role in accelerating launch plans for WorldView-4 as DigitalGlobe was cleared to begin offering its highest resolution imagery on the commercial market after the company had been regulated only to sell high-resolution products to U.S. government users and select private entities while downsampling data for all other commercial users.

Based on Lockheed Martin’s LM900 satellite platform, WorldView-4 is capable of highly agile targeting, swiftly moving from one target to the next to maximize coverage.

The satellite hosts a 1.1-meter telescope developed by ITT Corporation with, covering a 13.2-Kilometer ground swath. Taking advantage of its agile pointing system, WV-4 can assemble images of an area of 66 by 112 Kilometers in a single pass or point to multiple targets along its ground track.

After its smooth ride into orbit, WorldView-4 entered a 12-week commissioning campaign that included orbital maneuvers to put the spacecraft into the proper Sun Synchronous Orbit and detailed calibration activities to fine-tune the performance of the optical payload. DigitalGlobe released the first image taken by WorldView-4 in December showing the Yoyogi National Gymnasium in Tokyo. Since then, the company published more images from the satellite resolving activity in the South China Sea, cars in the streets of Sao Paulo and even beach-goers in Australia.

“Seeing these first images is only a glimpse of the value WorldView-4 will bring to the world,” said Carl Marchetto, vice president and general manager of Lockheed Martin Commercial Space. “This satellite will help disaster relief workers, city planners and government officials make critical decisions through clear pictures and information about events around the globe.”