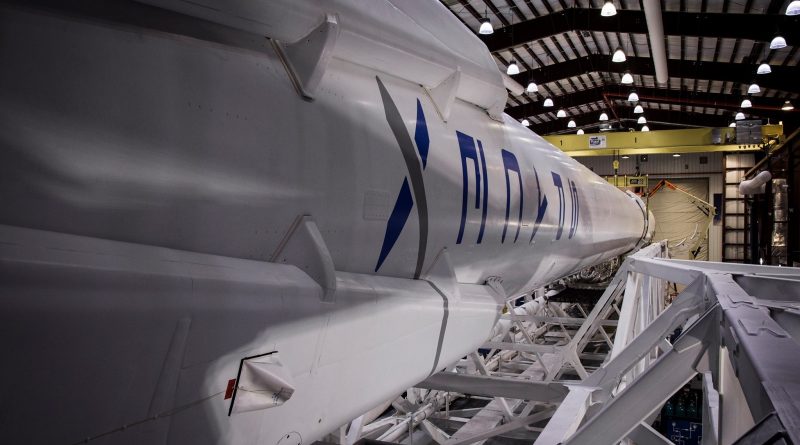 The launch of the SpaceX Falcon 9 rocket with the JCSat-14 communications satellite is being delayed 24 hours to a Friday morning target due to an unfavorable weather outlook for the Thursday opportunity. The launch window for Friday remains the same with a two-hour duration and an opening time of 05:21 UTC (01:21 a.m. local time).

The delay was called in the morning hours on Wednesday due to an unfavorable trend in the weather that was expected to hinder Falcon 9 countdown operations to proceed at their nominal schedule. A late-season frontal boundary is moving over the area on Wednesday, destabilizing the atmosphere and bringing widespread rain and thunderstorms. Problematic for the Falcon 9 launch preparations flow was a threat of hail and strong ground winds.

Though the frontal boundary was expected to move to a position south of the spaceport by the opening of the launch window, the concern was associated with inclement weather during Falcon 9 rollout and transition to its vertical launch position. The primary concern for a Thursday morning liftoff were Liftoff Winds and violations of the Thick Cloud Layer Rule.

For an opportunity on Friday, conditions are expected to improve as the frontal boundary moves further south, the only concern being thick clouds forming from low-level moisture.


Falcon 9 successfully completed its Static Fire Test Sunday night, firing up its nine Merlin 1D first stage engines for a brief moment for the collection of performance data. While data from the test was scrutinized, Falcon 9 was moved back into the hangar to meet its payload. Encapsulated in the protective payload fairing earlier, JCSat-14 was installed atop the Falcon 9 rocket on Monday and Tuesday.

Data reviews from the Static Fire were clean, allowing SpaceX to proceed towards the Launch Readiness Review as a final check of all systems involved in the mission including the launch vehicle, ground support equipment and downrange tracking stations.

With a 24-hour delay, Falcon 9 will remain inside the hangar until Thursday, rolling over to the launch pad at SLC-40 in more favorable weather to be raised to its vertical launch position several hours prior to liftoff. Power-up of the rocket will mark the start of a multi-hour testing campaign as Falcon 9 completes detailed checks and systems reconfigurations ahead of the speedy pace of countdown events starting at L-1 hour.

Tanking is planned to begin at T-35 minutes as part of a rapid sequence to fill Falcon 9 with over 500 metric tons of sub-cooled Liquid Oxygen and chilled Rocket Propellant-1. Propellant loading will close out just two minutes ahead of liftoff when Falcon 9 will already be standing on its own with the large strongback retracted. Switching to internal power and chilling down its engines, Falcon 9 will check off the last critical steps before commanding its nine Merlin 1D engines to ignite three seconds ahead of T-0 to soar to a total launch thrust of 694 metric-ton-force.

Lighting up the night skies over Florida’s Space Coast, Falcon 9 will swing to the south-east to take the standard route to Geostationary Transfer Orbit. The first stage will be in operation for just over two and a half minutes, handing off propulsive flight to the MVac engine of the second stage that will be tasked with a pair of engine burns – the first around six and a half minutes in duration to lift the stack into a slightly elliptical parking orbit for a coast phase of 18 minutes before the critical re-start of the engine of a burn of less than one minute. JCSat.14 is set for separation into a highly elliptical Geostationary Transfer Orbit half an hour after liftoff.

Departing the vehicle, the first stage will be setting out on another attempt of returning to the Autonomous Spaceport Drone Ship after a high-energy delivery. Due to the high velocity at stage separation and the limited propellant reserves on the first stage, the vehicle will endure a particularly extreme re-entry as no boost back burn can be made resulting in the stage flying to a downrange distance of 660 Kilometers. The ASDS ‘Of Course I Still Love You’ departed port on Sunday and will be awaiting the arrival of the first stage, precisely keeping its position in the Atlantic Ocean for a nighttime landing attempt.

A brief re-entry burn will be performed by the booster to slow down and shield its engine section from the extreme re-entry environment. The burn will be followed by two minutes of atmospheric descent during which the four actuated grid fins modify the booster’s angle of attack to control the downrange travel distance and position the vehicle for the landing burn. Whether the landing burn will use one engine or involve a three-engine ‘suicide maneuver’ has not yet been confirmed by SpaceX, though expectations for success of this high-energy return were kept low as continued fine-tuning will be needed to master the return sequence when propellants are in short supply.

The JCSat-14 satellite is aiming for a Geostationary Transfer Orbit from where it will climb into Geostationary Orbit at 154°E to deliver services to customers in Asia, Russia, Oceania and the Pacific Islands. The spacecraft is outfitted with 26 C-Band and 18 Ku-Band transponders to provide high-speed connectivity for maritime, aviation and resource exploration users as well as TV Broadcast, mobile communications and data networks services.