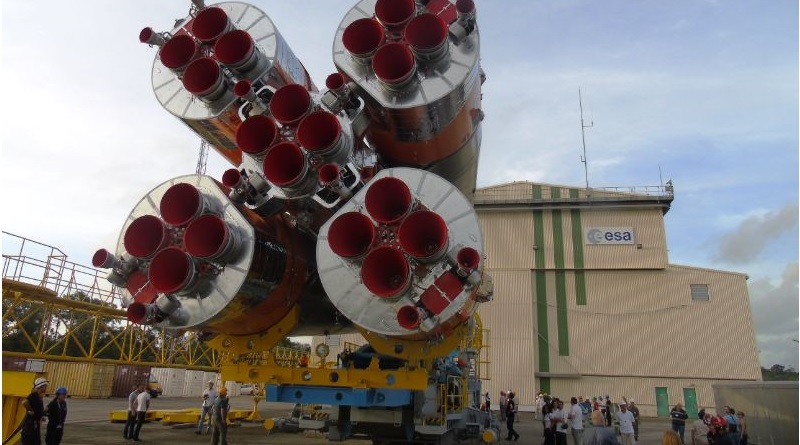 A Soyuz rocket stands tall at its equatorial launch site in French Guiana for liftoff on Friday with the Sentinel-1B radar satellite to join Europe’s Copernicus satellite constellation dedicated to Earth observation.

Liftoff is expected to take place at 21:02 UTC and Soyuz will operate for just under nine minutes before the Fregat upper stage takes over. Sentinel-1B will be sent on its way 23 minutes after liftoff, but Fregat will continue its mission for another four hours to deploy the MicroSCOPE physics research satellite and a package of three small CubeSats in a complex multi-orbit mission.

Friday’s launch is the fourth in support of the Copernicus Program, operated by the European Commission to deliver multi-level Earth observation capacity by deploying satellites with different payloads to a variety of orbits – ranging from optical sensors, over radars, to altimeter and hyperspectral instruments. The overall objective of the program is to give European users timely and high-quality data for a variety of purposes – keeping tabs on a changing planet, watching over land, the oceans and the atmosphere.


Sentinel-1A lifted off over two years ago, on April 3, 2014 also riding a Soyuz rocket into orbit. Outfitted with a powerful C-Band Synthetic Aperture Radar, the Sentinel 1 satellites will deliver high-resolution, round-the-clock, all-weather ground imagery for a variety of applications. Sentinel-2A lifted off in June 2015 carrying a multi-spectral imaging payload to deliver imagery across the visible and infrared bands for land observations. The ocean-surveying Sentinel-3A satellite headed into orbit earlier this year to measure sea surface height and waves as well as making global land color measurements

The Copernicus Program’s global surveys will be used by policy-makers, maritime operators, scientists, meteorologists and resource managers. Taking the pulse of an ever-changing Earth, the Copernicus satellite constellation is expected to finish deployment by 2020.

The Sentinel-1B satellite arrived in French Guiana in early March followed a few days later by MicroSCOPE to allow the two satellites to complete final inspections and propellant loading before being installed atop the payload adapters which were then mated with the Fregat Upper Stage. The Soyuz rocket was moved to the ELS launch site on Wednesday where it was placed in its vertical launch position followed by the installation of the encapsulated Fregat-Payload stack using the Mobile Service Gantry to lift the assembly atop the rocket.

Booked for a ride atop the Russian workhorse launcher, Sentinel-1B will make its way into orbit on a Soyuz ST-A rocket, the ‘Americanized’ version of the Soyuz 2-1A with a modified explosive Flight Termination System not used on the Russian version as well as modifications allowing the vehicle to withstand the climate at the Guiana Space Center. Soyuz 2-1A is one of two modernized versions of the workhorse of the Russian & Soviet Space Programs. It is nearly identical to previously flown Soyuz launchers, but features structural improvements on the third stage and an upgraded Control System switching from analog to digital control systems to make the Soyuz more flexible.

Lifting off at 21:02 UTC on Friday, Soyuz will fly on a northerly course from its ELS launch pad with a total thrust of 422 metric ton force, firing its four boosters for the first two minutes of the flight. The large core stage will fire its four-chamber engine until four minutes and 47 seconds into the mission before handing off to the RD-0110-powered third stage that will fire for four minutes to lift the stack into a sub-orbital trajectory. Payload fairing separation occurs late in the Core Stage burn.

After separation, the Fregat Upper Stage will assume control of the flight, igniting its 2,000 Kilogram-force S5.92 engine for a burn of ten and a half minutes to lift the stack into a circular orbit of 686 Kilometers, inclined 98.18 degrees. Sentinel-1B is set for separation 23 and a half minutes after launch, marking the start of a three-day critical sequence controlled from the European Space Operations Center in Germany to test and reconfigure the satellite for operations in orbit.

When the primary payload is on its way, Fregat will dedicate the rest of its propellant to a secondary mission of deploying four satellites. Two hours into the flight, Fregat will ignite for just 13 seconds for an orbit-lowering maneuver, aiming for an orbit of 453 by 665 Kilometers for the release of the three CubeSat payloads.

Packed into a single container are three 10 x 10 x 10-centimeter satellites from European universities, launching as part of the European Space Agency’s Fly Your Satellite initiative.

AAUSAT-4 of Aalborg University flies a student-built receiver for the Automatic Identification System, tracking ships across the globe. Built at the University of Liege, Belgium was OUFTI-1, carrying a D-STAR radio payload to test out digital communications using an amateur radio protocol for future use in space applications. E-ST@R II from Politecnico di Torino, Italy, aims to test out an active Attitude Determination and Control Subsystem for CubeSat missions based on commercial components and materials.

The three CubeSats will be sent on their way at the same time, two hours and 48 minutes after liftoff followed by the separation of the ASAP-S payload platform. Next will be a pair of engine firings, the first 12 seconds in duration at T+3 hours and 32 minutes and the second lasting 16 seconds at T+3 hours and 57 minutes, to raise the orbit to 711 Kilometers for the deployment of the 303-Kilogram MicroSCOPE satellite.

MicroSCOPE is a project of the French and European Space Agencies, carrying a fundamental physics experiment comprised of an ultra-precise differential accelerometer. The system measures the effects of Earth’s gravitational field on two objects of different material in an identical gravitational environment to gather data on the Weak Equivalence Principle (WEP) which postulates that a perfect proportionality exists between the inertial mass and the gravitational mass of a body.

Resulting from the WEP is the ‘Universality of Free Fall’ which states that all objects fall with exactly the same acceleration in the same gravitational field. The Equivalence Principle is a major part of Albert Einstein’s Theory of Relativity and experiments on Earth have so far returned the best accuracy value of EP at 10^-13. MicroSCOPE will employ state of the art technologies to improve the value by two orders of magnitude.

MicroSCOPE will be separated four hours and 52 seconds into the flight followed 15 minutes later by a 29-second deorbit maneuver of the upper stage to mark the end of the VS14 mission, the 14th launch of the Soyuz rocket from its South American launch site.