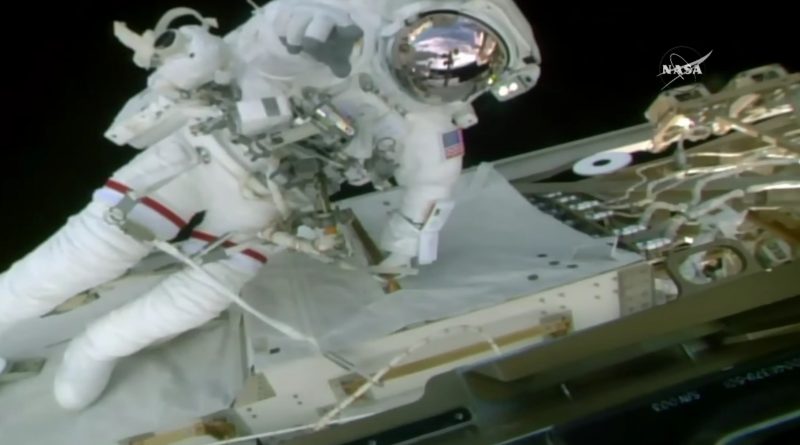 International Space Station crew members Randy Bresnik and Mark Vande Hei checked off a busy task list on Tuesday during the second of three spacewalks planned outside the orbiting laboratory this month to tackle a number of repair and outfitting tasks. Working on the exterior of ISS for six and a half hours, the pair dealt with the replacement of broken cameras, lubrication on the Station’s robotic arm and various preparatory tasks for future robotic and spacewalk efforts.

Tuesday’s EVA, the 204th in support of ISS Assembly & Maintenance, ran six hours and 26 minutes and accomplished all primary objectives plus two get-ahead tasks as Bresnik and Vande Hei carried the momentum from last Thursday’s EVA success into the new week.


Randy Bresnik, completing the fourth EVA in his career, now stands at a total EVA time of 25 hours and 11 minutes while Mark Vande Hei stepped into the void for the second time, now with 13 hours and 21 minutes of EVA time under his belt. It was the ninth spacewalk of 2017. All in all, the 204 ISS spacewalks have totaled 1,272 hours of work.

Last Thursday’s EVA revolved around the major task of replacing a partially failed Latching End Effector (LEE) on the Station’s robotic arm that had encountered a motor stall in August and was no longer capable of forming an electrical/data connection with any objects it grappled. Having been on active duty aboard ISS for over 16 years, this particular effector had been operated over 400 times as part of Canadarm2’s varied tasks that include capturing visiting vehicles, moving external equipment and assisting the Dextre robot in maintenance tasks.

Working for six hours and 55 minutes on Thursday, Bresnik and Vande Hei replaced the degraded LEE-A with an end effector formerly part of a temporary payload holding platform which had only been used 14 times over its tenure on ISS and was considered a viable spare to support Canadarm2 operations for years to come. However, in order to finalize the arm repair, lubrication was needed on all moving parts of the new LEE-A – representing one of the core tasks of the remaining two October EVAs.


Bresnik and Vande Hei officially started U.S. EVA-45 at 11:56 UTC on Tuesday after the usual multi-hour process of getting into their Extravehicular Mobility Units, pre-breathing pure oxygen to purge nitrogen from their blood and depressurizing the airlock in methodical fashion to permit final leak checks on the suits. Heading out the door at orbital sunrise, the two spacewalkers went through the usual verifications of tethers and suit systems before entering the EVA task list – unlike last week’s walk that revolved around a single task, Tuesday’s EVA had a multi-point list in store for the crew.

Randy Bresnik started his 4th career spacewalk by locking down a handle on a high-pressure nitrogen tank on the airlock before fetching a foot restraint and moving over to the Destiny laboratory where External Stowage Platform 1 is located – the very first stowage pallet delivered to ISS, having been on orbit since 2001. There, he set up shop and demated a heater cable from a Pump Flow Control Subassembly (PFCS) that was to be rotated by 90° to properly position a vent port for a future ammonia vent from the unit before it can be installed as a spare.

Meanwhile, Mark Vande Hei moved to familiar ground at the P1 truss where most work took place last Thursday. He installed a Worksite Interface Socket on the new LEE-A of the robotic arm that enables it to host foot restraints needed by astronauts when taking a ride on the tip of the 18-meter long Canadarm2. Once the foot restraint was in place, EV-1 and EV-2 joined forces at ESP-1 since the PFCS rotation was a two-man job.

As the very first Orbital Replacement Unit delivered to ISS, the PFCS uses a Common Structural Interface (CSI) – essentially a primitive version of the Flight Releasable Attachment Mechanism (FRAM) that became standard on ISS for all but the earliest spare components. CSI, unlike the FRAM, can only be manipulated by spacewalkers and does not have the ability to provide power to whatever it is holding.


Rotation of the PFCS was a fairly quick task with the crew releasing the 200-Kilogram unit by turning a handle, then seating it back onto the CSI in the new orientation and latching it back in place. After being re-connected to heater power, the PFCS is now considered ready for its ammonia vent to prepare the spare for when its needed within the Station’s Photovoltaic Thermal Control System.

The next task for the EVA was the replacement of a camera group at Camera Port 9 on the nadir side of the Station’s Port Truss which had been exhibiting a pink hue for several years after a color wheel within the standard definition camera got stuck. For the camera replacement, EV-2 ingressed the robotic arm to be moved to Camera Port 9 by robotic operators Paolo Nespoli and Joe Acaba while Randy Bresnik retrieved the spare Camera, Light, Pan/Tilt Assembly (CLPA) from the airlock.

At the Camera Group, Vande Hei first removed the External HD Camera Assembly (EHDCA) that had been added to the camera group in September 2016 and was functioning properly.

Next was the detachment of the entire CLPA by releasing two secondary and one primary structural bolt using the Pistol Grip Tool. The spare CLPA – handed over by Bresnik – was put in place through the reverse process, i.e. soft-docking the assembly via two guide pins & automatically connecting electrical/data interfaces through blind-mate connectors followed by driving the three bolts.

Vande Hei was unable to fully torque one of the two secondary bolts, but Mission Control was able to accept the installation with the primary bolt fully tightened and one out of two secondary bolts driven to torque. Re-installation of the EHDCA was trouble-free and Vande Hei connected the two power cables providing electricity for the HD camera and luminaire before giving Houston a GO to re-power the camera group, now with clear vision.

Continuing at a brisk pace, Vande Hei was maneuvered back to egress the arm and relocated the foot restraint onto the forward face of the truss while Randy Bresnik took the failed camera to the airlock and made quick work replacing a camera lens cover on the Mobile Transporter that had shown a smudge in its field of view for the past several months.

Randy Bresnik had to make an additional pass by the newly installed CP9 camera to release the pan/tilt locking lever that had been forgotten earlier on.

Staring down the barrel of Latching End Effector A, Mark Vande Hei used a grease gun and Ballscrew Lubrication Tool (BLT) to transfer Braycote vacuum grease onto the Central Rigidizing Ballscrew in the center of the LEE.

Next up were the four latch ballscrews, a task originally lined up for EVA-46. Although similar in nature to the central screw, the latch ballscrews are partially obscured from view, requiring Vande Hei to work mostly by feel when transferring grease onto the screws. ROBO operators Acaba and Nespoli assisted him by rotating the LEE-A in between lubrication runs to provide the best possible access to the latches.

Making good progress on the lubrication, Vande Hei managed to grease all four latch ballscrews, leaving only the linear bearing tracks and equalization brackets to be lubricated on EVA-46.

While Vande Hei was dealing with the lengthy lubrication task, Randy Bresnik swiftly proceeded through his tasks, bundling up a protective cover and removing a WIF Socket from the POA LEE (formerly LEE-A). He then dropped off his foot restraint at External Stowage Platform 2, placed an ORU bag inside the airlock and translated around Node 1 and to the Node 3 endcone for his final primary task.

Using a Pistol Grip Tool, Bresnik removed a pair of hand rails to free up mounting points for the future installation of Advanced Wireless Antennas to improve the Station’s capability of routing wireless video from external cameras and spacewalkers into the hard-line comm system of the complex.

Proceeding with another get-ahead task, Bresnik translated port to Express Logistics Carrier 1 where he removed a multilayer insulation blanket from a spare Battery Charge/Discharge Unit to make the Orbital Replacement Unit accessible for the Dextre robot to potentially save a future EVA should one of the active units require replacement.

Sharing the airlock with plenty of tool bags, Bresnik and Vande Hei ended the EVA in orderly fashion with the official close to EVA-45 coming at 18:22 UTC when the repressurization of Quest began.

Having managed to breeze through another EVA task list & two get aheads, Bresnik and Vande Hei will give teams on the ground the task of coming up with additional objectives for U.S. EVA-46, on the schedule for October 18 with Randy Bresnik again in the role of EV-1 and Joe Acaba stepping outside on his third career EVA, the first of this mission. Open tasks identified for EVA-46 are the installation of an HD Camera on CP3, the replacement of a camera group on CP13, finalizing the LEE-A lubrication, changing a fuse on the Dextre robot and preparing external spares for future robotic manipulation by removing protective covers.