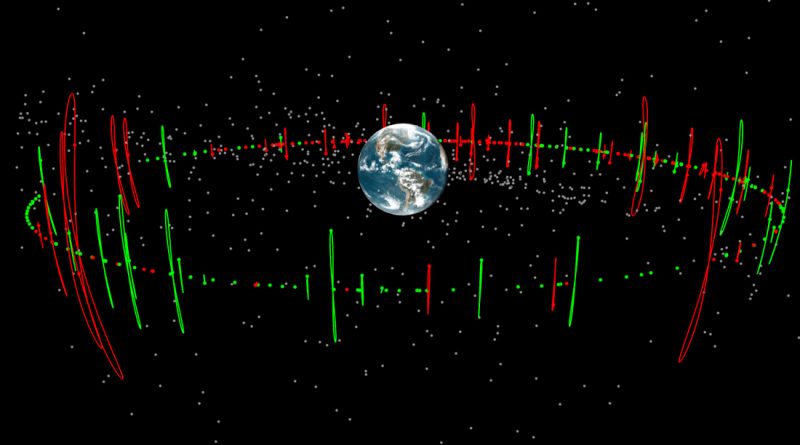 More trouble appears to be brewing in Geostationary Orbit as reports emerged this week of a satellite breaking apart in prime orbital real estate – the second such incident in as many months, adding to an already significant population of debris and zombie satellites that have to be dealt with by operators of the world’s communications and TV satellites residing within the Geostationary Belt along with vital weather satellites and national security assets.

Indonesian satellite operator PT Telkom reported on Saturday that the company’s 18-year old Telkom 1 communications satellite suffered an anomaly on Friday, August 25, that prompted the company to transition customer capacity from the satellite to Telkom 2 and the company’s newest spacecraft, Telkom 3S. The nature of the anomaly was not further characterized, but Telkom said the company was working with satellite builder Lockheed Martin to diagnose the problem and implement recovery steps.


A report appearing in Ars Technica on Wednesday provides optical space situational awareness data collected by ExoAnalytic Solutions that clearly shows the Indonesian Telkom 1 satellite involved in a fragmentation event. Video posted by Ars shows a diffuse cloud of material – gas, liquid or thruster exhaust – departing the satellite in two distinct directions followed by brightness changes on the parent object and the separation of at least one sizeable and several smaller objects from Telkom 1.

Consulting orbital data for the aging satellite, it becomes clear that the anomaly was associated with an energetic event of some sort. Before the anomaly, the Telkom 1 satellite was in a stable Geostationary Orbit of 35,781 by 35,794 Kilometers, inclined 0.01° with a period just 4.7 seconds from the nominal GEO period and a negligible drift rate of under 0.01 degrees per day. The next tracking element set, dated August 29 – 19:35 UTC shows the satellite in an orbit of 35,765 by 35,838 Kilometers, inclined 0.02° and now 48.3 seconds from the ideal GEO period.

Telkom noted that the Telkom 1 satellite lost its antenna lock on August 25 and the company was moving customers from the affected satellite to other company satellites as well as third-party assets, expecting all to be fully transferred by August 30. Still, the outage had a number of impacts including ATMs and electronic payment terminals dropping offline as Telkom satellites are used to interconnect bank branches and ATM terminals across Indonesia’s many islands.


Whatever may have transpired aboard Telkom 1 came with a propulsive force sufficient to nudge the satellite away from its ‘parking spot’ in Geostationary Orbit, causing it to begin drifting at a rate of 0.14 degrees per day to the west, according to the latest tracking data from the Joint Space Operations Center.

The sudden change in the satellite’s orbit and the apparent separation of debris illustrates the serious nature of the anomaly but does not reveal its cause – there are numerous systems on the satellite that could fail in an energetic manner and an external cause such as a debris impact can also not be ruled out.

The ExoAnalytic video appears to show a diffuse cloud of liquid or gas emanating from the satellite at fairly high speed in two distinct directions with continued venting evident at slower rate for some time thereafter. Several distinguishable objects appear to separate from the satellite in association with the ‘vent’ including one sizeable piece that remains visible as it drifts away from the spacecraft. The varying brightness after the event – if no sensor artifact – would indicate Telkom 1 entered a tumbling motion.

The abrupt orbit change, separation of debris and possible tumble is reminiscent of what happened in June to the AMC-9 satellite – posted on the opposite side of the planet. Under operation by telecommunications provider SES, the 14-year AMC-9 suffered an as of yet unknown anomaly that caused it to lose attitude control, begin drifting and shed a number of debris pieces which were also captured by the optical sensors of ExoAnalytic Solutions.

The energetic event nudged AMC 9 off its station at 83 degrees west longitude and it has since traversed some 15 degrees in the Geostationary Belt, passing more than two dozen satellites. SES said it was working with spacecraft manufacturer Thales Alenia Space to regain at least some control of the satellite in order to move it out of the GEO Belt if possible, though the lack of any signs of active maneuvering over the last two months would indicate AMC-9 is well on its way to becoming a permanent zombie roaming the GEO regime.

As with AMC-9, the source of debris is still unexplained for Telkom 1 but it is too early to tell whether it will also become an uncontrolled object passing through the GEO boxes of other satellites. At present, Telkom 1 is located at 107.4° East, slowly moving west. The craft’s immediate neighbors in its direction of travel are the Chinese Gaofen 4 Earth Observation Satellite and the AsiaSat 7 communications satellite, holding position at 105.7 and 105.45 degrees, respectively.


Telkom 1 is based on Lockheed Martin’s popular A2100 satellite platform and weighed in at 2,765 Kilograms when launching on an Ariane 4 rocket on August 12, 1999. The satellite is outfitted with 24 C-Band transponders and 12 Extended C-Band transponders to support Very Small Aperture Terminal (VSAT) network applications in Indonesia, Southeast Asia and Australia – supporting around 15,000 ground sites as of late.

The satellite suffered a problem with its south solar array drive mechanism due to a manufacturing error but otherwise functioned well throughout its planned 15-year service life. According to the state-owned PT Telkom, Lockheed Martin estimated the satellite could operate nominally until at least 2019 based on the status of its systems and propellant reserves within its tanks. This would have enabled PT Telkom to keep the satellite in operation until the company’s next satellite, Telkom 4 – currently under construction by Space Systems Loral, could go on line after its launch in 2018.

The industry-standard for Geostationary Communications satellites is a 15-year life time, but it is not uncommon for satellites to outlive that expectation and continue operating several years longer, offering additional revenue to operators or, like in Telkom 1’s case, bridge gaps until a replacement / coverage expansion satellite can be sent up.

It remains to be seen how severe the impact of the anomaly is on Telkom 1’s controllability and whether it will be possible to restore services or at least maneuver the satellite into a graveyard orbit. Typically, Geostationary satellites complete a maneuver at the end of their operational lives to move around 300 Kilometers above the GEO Belt where they will remain virtually indefinitely without posing a threat to active satellites.

Geostationary Orbit is currently home to 440+ active satellites and a much larger population of debris of various sizes – including defunct satellites that stopped working and could not be maneuvered out of the GEO Belt. Zombies, as these satellites have become known, can be a potential danger to active satellites in Geostationary Orbit, requiring operators to track their movements and respond by re-positioning active birds within their GEO boxes to allow the Zombie to safely pass.